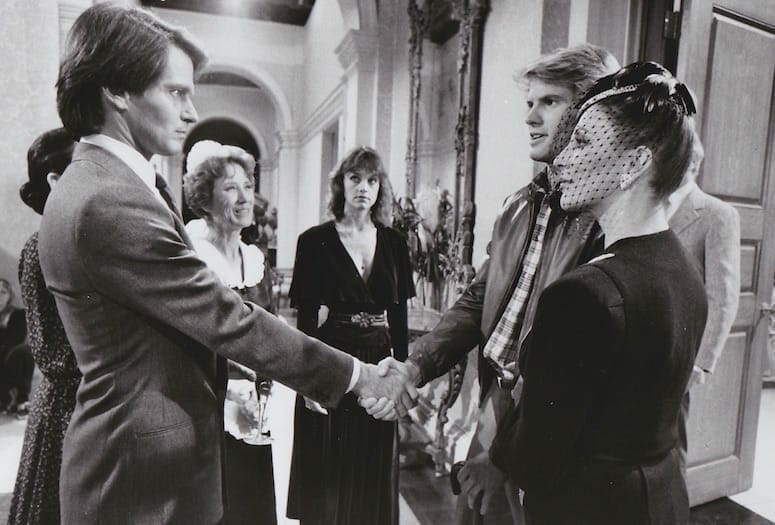 Conversations with Gordon Thomson are memorable. For starters, he’s blunt and brutally honest about his feelings, but there’s a distinctly unique elan to the man that does not go unnoticed.

His deep, rich, theater-trained voice certainly stands out. So does his commitment to swimming deep emotional waters. “I’ve been meditating since 1977 and I think it saves my life on a daily basis,” Thomson muses. “I think at birth, along with your birth certificate, you should be given a mantra that you can used when you reach the age of stress. Really.”

Not a bad idea. 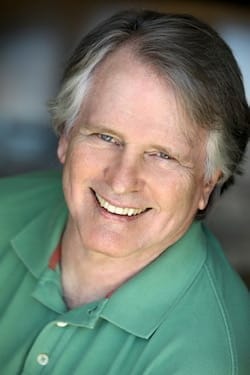 When the subject turns to Dynasty — that 1980s prime time Aaron Spelling-helmed juggernaut in which he embodied the long-lost yet perfidious Adam Carrington for seven seasons — he pivots with ease: “The new show is shit, in my opinion. I’ve never been in the New York Times in my life, but they quoted me when I said it was “an abomination.” And it is.

“I don’t know what the hell [creators] Richard and Esther (Shapiro) were thinking selling it, lock, stock, and barrel to CW, but the only good thing about it was the actress [Elizabeth Gillies] who plays Fallon,” he goes on. “Recently Heather Locklear said, ‘Every generation should have its own Dynasty,’ and I thought to myself, ‘Yes, it should.’ But it should at least have the production values, the quality of intensity, and the glamour that our show had. God knows it wasn’t Chekhov, but it was a wonderful holiday, almost all the time for our audience. That is one reason why it had legs. It still works today.”

True. So much so that one of its stars, John James (Jeff Colby) breathed life into a fabulous idea that would reunite the show’s cast members for an intimate evening of reflection, laughs and — what’s this? — even a musical surprise.

The result arrives in the form of “Our Dynasty: Tales from the Set,” which makes its world premiere at 7 p.m. Dec. 1 at Oscar’s Palm Springs, before hitting the road for a nationwide tour. Three Dynasty gents — including Gordon — are on the docket, so expect never-before-told backstage stories — Joan Collins vs. John Forsythe, oh my! — from the show and the actors — Linda Evans, Pamela Sue Martin, Diahann Carroll et al — who helped fuel its longevity. 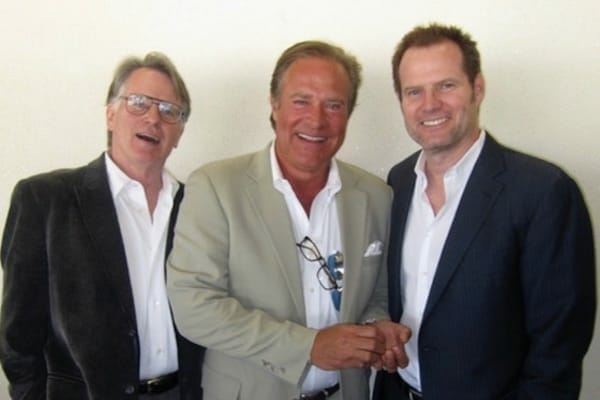 (From left) Gordon Thomson, Jack James, and Jack Coleman form the trio for “Our Dynasty: Tales from the Set.”

Thomson is ever grateful for that endurance — he entered the fold at the beginning of the soap’s third season in 1982 and eventually nabbed a Golden Globe nom. He says, “Once in a while, I run into people and they tell me, ‘Oh, you were so bad.’”

In a drunken state, he raped Kirby (Kathleen Beller). He relentlessly schemed with, and often undermined, Mama Alexis. And who could forget that savage story arc where he arranged to have his nemesis’s (Jeff’s) office painted — with toxic paint?

There’s an interesting backstory to that arc.

“I believe President Eisenhower’s ambassador to Italy, Clare Boothe Luce, discovered that the paint in her Italian apartment was lead-based and very slowly, and silently causing her severe illness,” Thomson shares. “So, she left and came home. Some clever person [on the show] knew that, resurrected the idea, and used it as a weapon. It's one of those odd things where people might go, ‘Come on!’”

To be sure, Dynasty was a guilty pleasure. At the height of its success, the show was No. 1 in the U.S. and played to a worldwide audience of more than 60 million fans weekly. Big hair, big shoulder pads, and even bigger catfights filled the screen as did iconic stars — from Rock Hudson to Billy Dee Williams — on occasion. 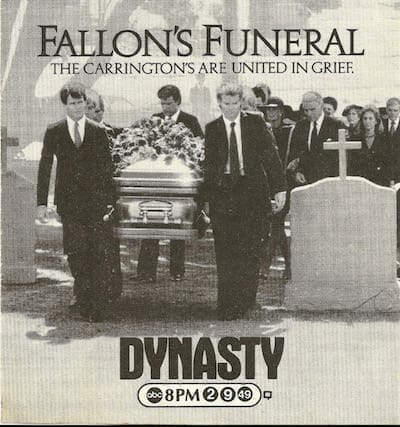 But at the beginning of Thomson’s tenure, he wasn’t sure how long his stint would last.

“I didn’t know what they intended when they put Adam into the mix,” he says. “I later learned that I was only supposed to last something like six episodes. I lasted seven years, which was the greatest compliment I ever got as an actor. Whatever I used to begin with, the writers seized on and fed into the writing mill. Because, first of all, Adam was abandoned. So, there was that whole vast abyss of to deal with, and the resentment — the love/hate thing with the parents. And that was just the beginning.”

He believes the characters of Alexis and Adam were both “firebrands” in their own way.

“Joan is — and people forget this because she was so definitive as Alexis — a very good actor,” he says. “She went to RADA [Royal Academy of Dramatic Art], which is not a guarantee, but it shows that she was serious about acting when she was very young. Then she was cursed/blessed with that gloriously beautiful face. She got over all that and used it for Alexis, which is why she was so extraordinary. She was a big treat to work with.”

While there are far too many Dynasty storylines to comb through in one sitting —both good (Fallon’s baby kidnapped) and questionable (Moldavian wedding massacre, really?) — it’s fitting to note that at the time, Thomson was not “out” yet and played a character who didn’t hide his homophobia.

"Acting is where I feel most ‘safe." — Gordon Thomson

Was it challenging keeping a part of himself concealed?

“The few people who were aware of me, it was just fine,” he notes. “But I didn't feel cowardly. I didn’t feel brave. I felt that this is what I had to do — and I was right. By the way, I was outed. I didn’t ‘come out.’ I was outed four years ago by a journalist who I will not name because he doesn't deserve it. At the end of the interview, he asked me out for a date.”

He references Richard Chamberlain, who is, “remarkable for a number of reasons, but he’d said that because of the DNA of actors like him — and every actor on Dynasty — that we were blessed/cursed with good looks. Therefore, giving the context of the work, we were also the subject of fantasies. A lot of women, for instance, along with a lot of gay men, I assume, had fantasies about having sex with XYZ who they saw on the screen.

“So, you're very much part of people's lives, and Richard always thought, ‘Well, let people have their fantasies. Men, women,’” he adds. “And then when your day as that is done, go home. Richard came out in a memoir when he was 73. And I think that's the way to do it, really. At least it was then. Now, it doesn't matter so much. It just knocks me out that things now are so much easier. Think about it, Matthew Shephard was beaten to death because he was gay, and it's only 23 years ago when that happened. And that’s in this country.”

"...I am looking forward to finding something else to love and care for. That’s very important to me.”


Thomson hails from Ottawa, Canada. Before Dynasty, he reached great heights on stage — he played Jesus in “Godspell” opposite soon-to-be stars Gilda Radner and Martin Short. Dynasty, and in guest stints on its love-it/hate-it spin-off The Colby’s — led to other appearances in popular soaps, such as The Young and the Restless, Passions, and Sunset Beach, among others.

He “loves” acting, noting: “I was a lucky to know at the age of 18 that I had to be an actor, which saved the world from a really second-grade, probably alcoholic English teacher and thank God I didn't go there. Acting is where I feel most ‘safe.’”

As for the road ahead? Well, there are other stage roles — he turned heads in Michael Kearns’ play “Bloodbound” a few years back — and, of course, the “Our Dynasty: Tales from the Set” experience — the tour is produced by Mark Rozzano (of Disney’s Beauty and the Beast) and Andrew Scott — but deep down, Thomson wants, perhaps, what many humans want — connection.

“A dog I loved, Rose, recently passed,” he reflects. “I’m not looking to replace Rose, I am looking forward to finding something else to love and care for. That’s very important to me.”

• READ NEXT: Bob Mackie Signs His New Book Nov. 20, But First Dishes About Designing for Divas Like Cher, Streisand.