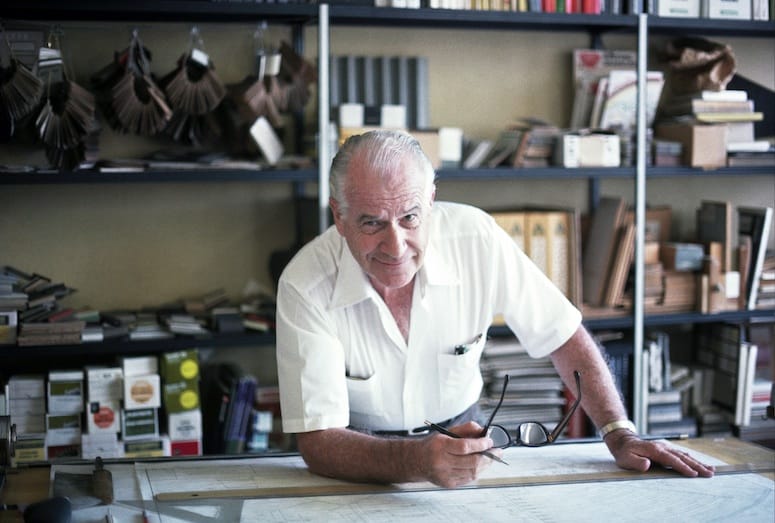 When filmmakers Jake and Tracey Gorst set out to create a documentary about midcentury architect E. Stewart Williams, they were unaware of the direct ties and connections that lay before them.

“We were finding connections in places we didn’t expect,” says Jake.

For example, Jake has a family history in architecture. His grandfather was Andrew Geller, the renowned American architect, painter, and graphic designer known for his uninhibited, sculptural beach houses in the coastal regions of New York, New Jersey, and Connecticut during the 1950s and 60s. E. Stewart Williams surveys the area for the Edris House.

In fact, both Geller and Williams had previously worked for acclaimed industrial graphic designer Raymond Lowey, sharpening and honing their specialized crafts that would eventually become their signature trademarks in later works.

The Nature of Modernism: E. Stewart Williams, Architect will premiere at 5:30 p.m. Nov. 13 at the Palm Springs Art Museum to follow the opening of the museum’s Architecture and Design Center on Nov. 9 featuring Williams’ work. A DVD of the film is currently in the works, however, no release date has been set. The finished product of the Edris House

In addition to the shared common ground between Jake’s family past and Williams architectural journey, the actual making of this film was stirred on by their original 2005 film, Desert Utopia, which conveyed the general history of modernism in Palm Springs.

Along with the countless hours of preproduction research, archival review, and a series of personalized interviews with Williams’ family, friends and related associates, Jake and Tracey were fortunate enough to receive special personalized tapes, made by Williams himself, recounting his family and work life. Happily, Jake shares how much having those personalized tapes by Williams, carries the film,“ He’s the one that ties the whole story together – having him tell his own story is what personalizes the film in greater detail.”

Between the combined work of the Gorst’s directing, and co-producing of the film, and William’s own oral history, the viewer will embark on a real life story of one man’s passionate journey that systematically reshaped and redesigned the modern architectural landscape of Palm Springs.

“People will come away from this film really knowing Williams, and loving him for all his life long achievements,” Gorst says.