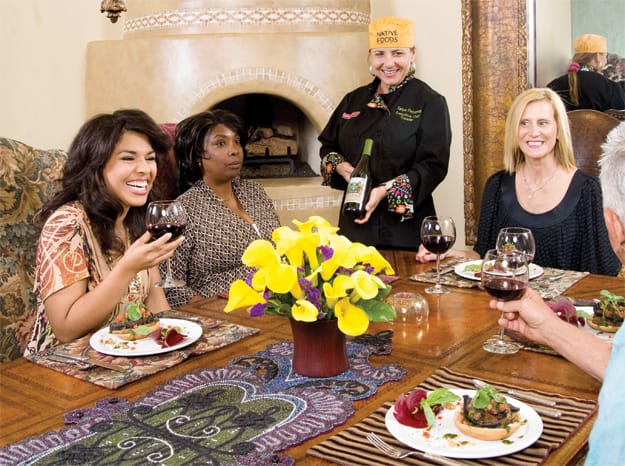 Some wineries eschew fining and filtering, claiming those processes can strip wine of its character. Mendocino County’s Frey Vineyards, which produces both organic and biodynamic wines, uses bentonite to clarify and stabilize white varietals only. “We don’t fine red wine, because it goes along with our whole philosophy of wanting to produce a really pure product,” says Katrina Frey.

The Hess Collections’ Peter Lehmann Wines of Australia marks its labels “vegan friendly.” But, because wineries are not required by law to do so, vegans may need to contact a winery directly. An online source, www.barnivore.com, rates the “veganosity” of beer, wine, and spirits.

HARMONY AT THE TABLE

When selecting a wine for a particular food, bear three general guidelines in mind, Plummer advises: Match weight with weight, intensity with intensity, and aromatics with aromatics — on a sliding scale to achieve balance.

“Scallops in butter go well with a buttery chardonnay. Spicy foods pair better with a sweeter wine to counteract the spice. Oilier dishes require heavier tannins. You are looking for a harmonious state in your palate,” Plummer says. “Sometimes it takes extremes to achieve that.”

Vegans often use spicy ingredients, including curry, kimchee, and peppers. According to Plummer, hot dishes call for a low-alcohol, sweeter-style wine, such as Riesling, gewürztraminer, chenin blanc, gamay Beaujolais, and even petite sirah. “Spicy foods with high-tannin wines such as cabernet and merlot will dry out your palate and all you will get is heat and alcohol,” he says. Frey recommends gewürtraminer and sauvignon blanc for Asian-style dishes and zinfandel with Italian and Mexican spicy foods.

Plummer pairs acidic foods (i.e., tomatoes, citrus, and eggplant) with high-acid wines such as sauvignon blanc, pinot grigio, sangiovese, zinfandel, or grenache. “One of
my favorites is sauvignon blanc from New Zealand, which has an overwhelming aroma of grapefruit,” he says. Frey likes cabernet sauvignon and zinfandel with eggplant and zinfandel and sangiovese with tomatoes.

With fatty foods such as avocado and olive oil-based dishes, Plummer suggests medium-bodied wines with soft tannins. “Those tannins will help dry out the palate from the oiliness,” he explains. His picks: oaked chardonnay, merlot, syrah/shiraz, and “some soft-tannin cabernets.”

Fibrous, starchy foods (i.e., potatoes, pasta, and bread) should be paired with wine based on the sauce or condiment. “I usually go with a medium, medium-plus acid with some body and light fruit tannins,” Plummer says, listing unoaked chardonnay, pinot grigio (primarily out of Italy, where they tend to be unoaked), a light merlot, and — especially with tomato sauce — sangiovese. Frey likes chardonnay with cream sauce pasta.

As with root vegetables, hearty pinot noirs such as those from California’s Central Coast (especially the Santa Lucia Highlands and Santa Barbara County) complement bean recipes.

For nut-based dishes, Plummer recommends dry sparkling wine such as cava from Spain or an Italian white varietal such as pinot grigio or vernaccia, which has honey and nutty characteristics. “My other all-time favorite is pairing nuts with sherry,” he says.

A few vegan standards present challenges. According to Plummer, bitter foods such as raw asparagus, artichoke, and beets make wine taste metallic. He also recommends avoiding vinegar-based dishes with full-bodied wines such as cabernet, merlot, and tempranillo, which will only emphasize high acid and alcohol. But he admits he has successfully paired fruit vinaigrette with pinot noir. Frey, on the other hand, enjoys sauvignon blanc with green salads and pinot noir with vegetable salads.

Pairing wine with sweets is, appropriately, a piece of cake. While vegans may avoid certain ingredients in their desserts, guidelines for wine with non-vegan sweets hold true, such as Rule No. 1: “Chocolate and cabernet are a classic combination,” Frey says. For apple and pear desserts, she opts for chardonnay.

Plummer notes this general rule of thumb: Pair sweet dishes with wines that are sweeter than the dish, such as ice wines and botrytis wines (the latter includes Sauternes, sweet Rieslings from Germany, and Tokay). He offers this final tip for a vegan dinner finale: “Port, especially vintage Ports, should be primarily vegan, because they are not fined and filtered.”

Sure, people will continue to assert that meat and wine go together like Fred and Ginger. But when you think about it, what could be more natural than pairing food and drink that both come from the vineyard?