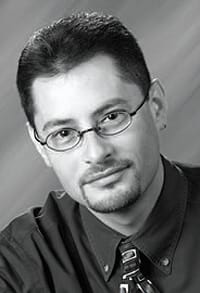 After a lengthy and immortalizing testimonial, an elder statesman in the 93-magazine-strong City & Regional Magazine Association looked up from the lectern in a San Diego convention ballroom — where at least 500 magazine publishing executives awaited to hear the recipient of the organization’s Lifetime Achievement Award — and introduced Milton W. Jones, a “pioneer in city and regional magazine publishing.”

Reluctantly, Milt — “The Chief” as some of us know him — ambled from the Palm Springs Life table, purposely situated in the deep cheaps, and adjusted the microphone to his liking. Then he spoke: “If you expect me to stand here and give a goddamned speech, you’re out of your mind.”

I remember these words not only for their audacity, but because he uttered them only two days after I took my place as editor of Palm Springs Life in May 2002. Milt’s son and Associate Publisher Frank Jones stood, stuck his fingers in his mouth, and whistled so loudly that the ringing lasted through the next day. Our table roared in a fashion unfitting for the staff of “California’s Prestige Magazine.”

I started drinking immediately — Baccardi Black and Coke, one after another. I remember little else from that night — other than thinking that I would enjoy working with these people.

We have since redesigned and revitalized the magazine and renewed our commitment to its mission: to engage the desert in a variety of media and to promote Palm Springs and the entire Coachella Valley as the premier destination to live and visit.

This month, I have the humbling privilege of presenting our 50th anniversary edition. It begins with my interview with Milt, who reveals what he thought of the Lifetime Achievement Award, explains why he missed his own star dedication on the Palm Springs Walk of Stars, and much more.

This edition is a historical document. And a tremendous measure of credit for its content goes to the tireless efforts of Deputy Editor Janice Kleinschmidt and Photo Editor Jay Jorgensen. Their trenchant research, sharp judgment, and palpable enthusiasm influenced every word and picture on the pages designed by Creative Director Stuart Funk.

On behalf of our entire staff, I thank everybody who has contributed to the enduring success of Palm Springs Life. Cheers!