Eisenhower Health Continues To Raise Its Bar After 50 Years 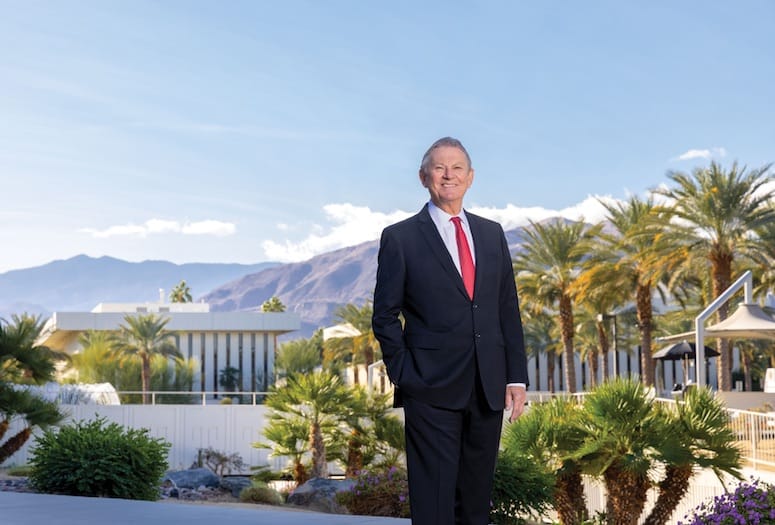 During the 20-year tenure of president and CEO G. Aubrey Serfling, Eisenhower Health has raised more than $900 million, which he says accounts for its exceptional care.
PHOTOGRAPH BY MARK DAVIDSON

“Every organization has its history. Ours began with very powerful people,” reflects G. Aubrey Serfling, president and CEO of Eisenhower Health. Though individuals prominent in society (some famous) got the institution off the ground, he says, “Excellence benefits everybody who walks through the door. That really was the vision.”

Philanthropy remains the backbone of the nonprofit health system’s expanding capabilities. As Serfling explains, “We support a retirement community, and Medicare pays a lot less for services than commercial insurance companies.

“We have raised over $900 million in the 20 years that I have been here, and that has made an enormous difference between being mediocre and being exceptional.” Mediocrity, he says, “is not good enough for this community. We reach for the stars.”

Such aspiration, he emphasizes, is built into the culture of Eisenhower at every level. “It is inspirational to see people get behind us and enjoy giving. They are investors in the future.”
Serfling declares it impossible to separate Eisenhower’s success from its leadership.

“I have the best management team I have had in my 40-year career,” he extols. “Smart, thoughtful, and compassionate” is how he describes executive vice president and chief operating officer Martin Massiello, adding, “We share the same core value system.

“People ask, ‘What is your organizational structure?’ I tell them, ‘Those who need to be in the room are different depending on the issue. Who would have the knowledge to contribute to a solution?’ I see myself as one of the team.”

He notes that Eisenhower not only has recruited doctors that major university centers attract, but also has Magnet status from the American Nurses Association and teaching-hospital accreditation.

To remain a vibrant source of service to the community, Eisenhower Health must continue its evolution.

“When I came here, over 80 percent of our revenue came from people hospitalized in beds,” Serfling relates. “Now we operate on a 50 percent outpatient basis. We have clinics all over the valley. Technology has enabled us to do so many things.”

Over the next four months, Palm Springs Life will highlight Eisenhower pillars of excellence:

Cardiology: “We have 17 cardiologists, with all subspecialties covered,” Serfling says. “We need to upgrade the technologies and facilities, and that’s probably at least a $50 million project.”

Outpatient Services and Clinics: “We have more than 1,000 employees in clinics across the valley,” Serfling reports. Visits of some 600,000 a year to off-campus sites evidence the need to make healthcare more convenient.

Oncology: “We have a great relationship with the University of California, San Diego,” Serfling says, stressing the importance of treatments and techniques in research phases. “It used to be that cancer was defined by site. Now it is [treated] at the molecular level. We work with university faculty on developing personalized plans for cancer patients.” The affiliation means that Eisenhower can offer a growing number of clinical trials.

“I really wish Dolores and Bob Hope and Walter and Leonore Annenberg could be here on our 50th anniversary,” Serfling concludes. “I think they would be extremely  proud and say, ‘We had a dream that has been made into a day-to-day reality.’”

• READ NEXT: Sunnylands Offers Its Staff a Bright, Efficient "Heaven".