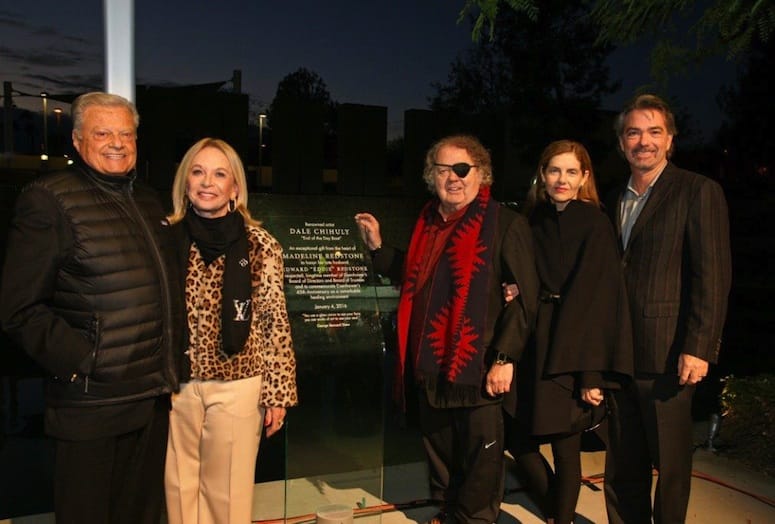 One of Eisenhower Medical Center’s supporting commitments is to provide a healing environment for all patients, visitors and staff. Through a generous donation by Eisenhower donor Madeline Redstone, the hospital upheld that commitment with its installation of Dale Chihuly's "End of the Day" Boat on Jan. 4.

Nearly 100 attended the unique, invitation-only affair highlighting the hospital’s culture of intertwining a healing environment with health care. The event also continued the hospital’s year-long celebration of its 45th anniversary.

Eisenhower’s Foundation President Michael Landes introduced G. Aubrey Serfling, president and chief executive officer, who conveyed his deep gratitude for Redstone’s exceptional gift. “When I heard we were receiving this gift from Madeline, I got so incredibly excited about it,” he said. “What medical organization in this country has a boat filled with Chihuly glass? It doesn’t get any better than that.”

Landes then asked Redstone up to the podium for the unveiling. He mentioned how important both Redstone and her late husband, Edward “Eddie” Redstone, were to the growth of the Medical Center. Redstone shared a brief story of how she procured the “End of the Day” Boat and Eddie’s love for Eisenhower Medical Center.

“He knew that the hospital would be not only one of the best hospitals in the state of California but also the country. And it is,” she said.

Art curator David Austin shared a sweet story of a patient watching the Chihuly installation. He asked the patient if they knew what they were looking at, “She replied, ‘no, but it makes me happy…’” — truly an indication that Redstone’s generous gift will benefit everyone who experiences it.