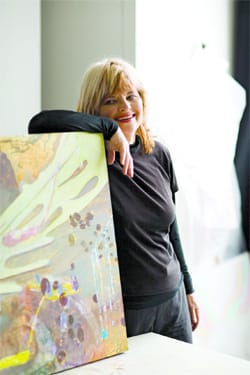 “Painting is parallel to life,” artist Philip Guston once said. “You know when you’re making love and when you’re not making love.” That conflicting reason and desire has been the foundation of so many great artworks, from Adolph Gottlieb’s Imaginary Landscapes to the seductive paintings of Nicolas de Stael, an artist who recurrently addressed the dilemma of nature versus abstraction. Decades later, the tense, expressive works of Elizabeth Chandler reflect the same concern.

Chandler, 65, a Desert Hot Springs resident, works in a studio in downtown Los Angeles — a light-filled loft where she delves into her consciousness, creating lyrical and visually rich mixed media works using encaustic, oil pigment, gold leaf, tar, masking tape, and epoxy board. She often excavates these materials, working in a constructive and subtractive manner. The intense tactility of the surfaces and lush coloration combine to create weathered-looking surfaces with an impressive sculptural quality.

Born in Southern California, Chandler earned a fine arts degree from Stanford University with minors in math and biology. She also pursued contemporary dance and illustration.

In her continual search for knowledge, Chandler has blossomed as a multi-dimensional artist devoted to painting, photography, and installation work.

We sat on a sun-filled day, enjoyed tea, and discussed the artist’s work, as well as changes in the art world, the roles of inspiration and abstraction, and a robust renewal of spirit she has experienced since relocating to the wide-open desert.

You recently said that you feel you are “working in the Romantic, Urban Pastoral, and Modernist traditions with a contemporary filter.”

I think that statement is pretentious, if not meaningless. Well sure, I’m living in the 21st century. I look at art being done by my contemporaries. I don’t go to the extreme of saying that nature is no longer relevant, which I know that some people do, and I think that’s ridiculous. Most of the people viewing the work live in urban environments, and I think that technology is changing our vision and the way we think, so it has to be taken into account.

Painting almost always carries echoes of other painting in it. In your case, the works of Paul Klee, Wassily Kandinsky, and at times Philip Guston come to mind.

Have these artists influenced you?

I look at work all the time, and I have an incredible visual memory. Paul Klee was one of the first artists I ever looked at when I got interested in being an artist — not Kandinsky, but Klee. Philip Guston, of course, I am absolutely amazed by. When I first saw his late work … it was completely over my head. It’s weird because I’m working away and I’ll do something that looks like a Picasso or an Arthur Dove, especially an Arthur Dove — looks like it was done in the 1930s — and I have to watch that because I am not Arthur Dove, I don’t want to be Arthur Dove; I don’t want to do work that is that derivative, but it’s all in there.

Do you have preconceptions when beginning a work?

Yes, although it never looks like what’s in your head! It’s impossible. You start somewhere and then it goes. The way a lot of artists are working now, I know that they plan stuff on the computer and they translate it onto canvas, and basically it’s all kind of worked out ahead of time.

I don’t think I could ever work that way. The piece has to have some life to it. It needs to feed back to me. I don’t want to be too controlled.

The contemporary art world has ex-perienced major changes since you began your career 40 years ago.

How do you view today’s market? Are there more limitations?

(Laughs) Oddly enough, there aren’t more limitations, but there are some. It seems wide open right now. … There are a lot of unspoken rules. I just want to do work that’s current, as current as I can get, although there’s a certain point beyond which I am not able or not willing to go. But otherwise, I’m not relevant. This field is so isolating. That’s why artists quit. It’s too weird spending all of this time by yourself. So, at best, you want to have some sense of community. Even if you don’t meet the other artists, at least you know that your work is communicating or addressing the same problems that you see other artists are addressing, because then you fit into some kind of dialogue. It’s reinforcing when I see other people working with the concept of landscape. We’re all working with it, trying to figure out what our current relationship is to the landscape, aside from trying to save the environment and aside from going back to nostalgic plein air painting, which, in my heart of hearts, I love.

Are you your harshest critic?

I don’t know. Yeah, no. I am pretty hard on myself.

I’ve always thought that being in the presence of great paintings brings you closer to understanding yourself.

In your case, has the physical act of painting these erratic, psychological landscapes taken you closer to understanding yourself?

Absolutely. I mean I will not link up making art with therapy. However, certainly the kind of rigor — and it is rigor, discipline to work every day as an artist — brings you up against yourself all the time.

The nature of your work seems incredibly complex and tense spatially and technically — especially given the science references, including DNA, which you explore in the Notations series. Can you pinpoint similarities between artistic and scientific practice?

Absolutely. They’re not that different at all — the experimental methods, scientific research. As far as I’m concerned, it’s all kind of the same thing.

How do other sciences, such as topography and archaeology, appear in your work, and what roles do they assume in your abstractions?

I read a really interesting book a couple of years ago: The Fate of Place. The guy’s name, oddly enough, was Edward Casey, if not the Edward Casey, who’s a psychologist. For a while, I was really hoping that I’d be able to take the ideas in the book and translate them into visual material and make the work about specific places. I think that’s where the Site paintings came from. The connection didn’t happen; it was just forced or contrived. I think that was the root of it. I think it’s the idea of feeling the spirit of the soul of the place that you’re in.

Other than Casey, do you have other literary influences?

T.S. Eliot, certainly, and Ralph Waldo Emerson. There are several layers to the question, one layer being the work I read as a young adult. It seems that when one reads, especially fiction, that one is changed by the fiction, that one incorporates that experience into one’s being, if the fiction is good, in a sort of subconscious way. And it comes out, somehow; it becomes part of who you are in a way that traveling or living in a foreign country might. So, as a kid, my grandfather encouraged me to read 19th century English and maybe early American, so Nathaniel Hawthorne, Herman Melville, Charles Dickens, Mark Twain, Jane Austen, stuff like that. Of course now I read a lot of contemporary fiction; I read a lot of nonfiction and art criticism and writing on art. I think that my second-largest book collection, second to the art books, is psychology- and mythology-related material — and also feminism.

Are you a Richard Wagner fan?

Man, is that a loaded question or what? Actually, that’s what William Wilson said about my earlier work. He compared it to complex, symphonic music.

It’s so tumultuous. It never ceases to be powerful. It’s so potent. Good. I hope so. My relation to Wagner
is complicated and, yes, of course, I have listened to his music. It’s ambivalent because if you listen to Wagner on headphones, it tends to give you a headache. It goes on and on and on and is just so heavy.

Do you consider your work to be political?

It seems to be environmentally concerned. My work has to do with the environment in a much more personal way. I’m very connected to the Earth, and I have a strong affinity for nature. It’s the culture-nature conflict that a lot of us have. There were years when I had some fantasy that I was going to get a cabin and live in the High Sierras or something.

Instead you end up in Desert Hot Springs with a Starbucks.

(Laughs) Starbucks! Thank God! You know, I’ve been working on them to get The New York Times. Every time I go in there, I say, “So when are you getting the newspaper?” It’s my little project.

Have you noticed any shifts or new directions in your work now that you’re in a much more barren place?

I’m sure that it does; it’s subconscious. I was very conscious of a major shift when I moved to Santa Barbara. My work went very minimal; it emptied out and it was pastel. There was some discussion in Idyllwild during the [Painting’s Edge] workshop last year about how the landscape moves as you’re driving through it. I don’t know if I got the idea of doing one point perspective before the conversation, during it, or in the middle of it or when that happened, but that’s the experience of the desert, especially coming out of L.A. and coming through the pass where the windmills are and then [the land] opens. As scruffy as that landscape is in a sort of inhospitable way, it is nature and you are in it. When looking at the new work, I feel that it’s going, it’s moving, and it really has a lot of places to go.