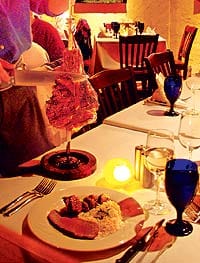 When you first meet Tamer Amer, you can’t help but think, “Now here’s a guy who could put away a steak.” Tall, athletic, and impossibly young at 26, Amer is general manager and part owner of Picanha Churrascaria Brazilian Grill & Bar, the El Paseo steakhouse that has introduced locals and tourists alike to the joys of churrascaria, the traditional Brazilian form of rotisserie grilling and tableside carving. It’s not much of a surprise, then, when you learn that Amer played water polo — a deceptively rugged sport that demands both power and finesse — for the U.S. World Cup squad in 1997.

“Playing water polo was my passion,” Amer says seriously, but then a broad smile appears across his face, he spreads his arms out wide, and his eyes move slowly about his new restaurant, “but this is what I love now.”

If he has his way, Amer won’t be the only one who falls in love with the centuries-old style of grilling. Picanha’s original location, in the heart of Burbank’s Media City, has turned into a destination restaurant for the notoriously fickle entertainment set that lives and works nearby. In the desert, Amer understands that location wouldn’t matter if the quality wasn’t there. “There are so many choices,” he says, “so we must make an impression.”

After searching for nearly three years for the right location, Amer has begun making an impression with his casually cool spot in the center of El Paseo, not far from The Gardens shopping center.

Though decorated in soft earth tones and featuring an expansive bar that seems primed for the kind of après-golf scene the desert is famous for, the real impact comes from the food itself. The hallmark of dining is the sheer opulence of it all: Instead of ordering only one item and subsequently envying your dining companion’s meal, Picanha waiters dressed in traditional gaucho-ware — right down to the boots — arrive at your table with swords skewered full of steak, lamb, pork ribs, filet mignon, bacon-wrapped chicken, and a variety of other specialty meats. The waiters then skillfully carve out portions to your specifications using a knife roughly the size of Excalibur.

And while this may all sound like the dreams of protein diet impresario Dr. Atkins, you’ll have to cheat a little if you wish to indulge in the plantains, garlic mashed potatoes, grilled vegetables, and well-appointed salad bar that accompany the symphony of meat — or if you leave room for their trademark desserts (including a very substantial flan) made fresh on site.

Amer knows well that the desert can be a difficult place to launch a new restaurant, especially one featuring a foreign take on an American classic — meat and potatoes — but it’s a challenge he relishes. If there’s one thing he learned playing world-class sports, it’s that preparation makes a champion. “It’s hard work,” he says, “but there’s nothing better than performing.”