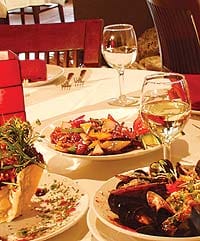 If there is one undeniable truth about traditional Asian cuisine — other than the age-old myth that you’ll be hungry again soon — it is that upon completion of your meal, after the wait staff has cleared the dishes and you’ve dipped into the blasé green tea sorbet, you’ll get a middling sense that a deep-dish serving of crème brûlée would go down awfully smooth, thank you very much. Or maybe some cheesecake. Or both. But, alas, up until Wang’s in the Desert opened at the South Indian Canyon Drive location previously occupied by the kitschy cool Flower Drum and, before that, the Rat Pack hangout Jilly’s, this food lover’s dream was destined to remain just that.

Which is why Wang’s isn’t what you might consider traditional Asian cuisine, because neither crème brûlée nor cheesecake distinguishes this latest venture by the owners of the Laguna Beach staple (and Zagat rated) Woody’s on the Beach; rather, it’s the sensation that from the moment you walk through the door, you’re part of a family atmosphere — albeit a family where excellent contemporary pan-Asian dinners are served on a nightly basis alongside a reasonable wine list, artistic décor, and — in only a few short months — a veritable who’s who of desert residents.

“We want to be the type of restaurant where someone can come in a few times a week and afford the menu,” says Alford Harrison, co-owner of Wang’s with longtime desert resident Joel Herzer. “We all live such busy lives, it’s almost more of a luxury to go home and cook dinner than it is to go out. And it’s more expensive when you think of the time to shop, to cook, to do the dishes. You come here, you get an entrée, a glass of wine, we’ll do the dishes, and you get to go home and go to bed.”

With entrées topping out under $18, Harrison’s assertion isn’t too far from the truth. To really enjoy Wang’s, however, is to dive into its less traditional offerings, such as the House Specialty Spicy Pork Chops or the Barbecued Lamb Chops — both conservatively priced and heartily apportioned. For the less adventurous, traditional favorites Mu Shu and Kung Pao Chicken, done with Wang’s unique flair for spices, certainly satisfy.

Unlike many new restaurants that open with excitement and opportunity but with little idea of how to manage a seasonal population, Wang’s appears to have a solid footing with its commitment to community, both within the walls of the restaurant and in the city at large. Woody’s, the establishment’s sister property, has helped raise more than $500,000 for local charities, and Herzer believes the same can be done in Palm Springs, his eye already focusing on Desert AIDS Project. Giving back, Herzer says, is part of a corporate philosophy that is as important as serving first-class meals. Judging by the crowds, which have flocked in since its mid-November opening, Wang’s will have plenty of opportunities to show its mettle in both regards. The fortune for this new hot spot looks very grand, indeed.