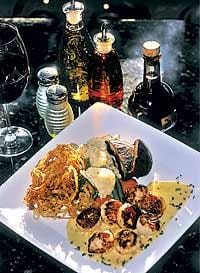 It’s tough to make a culinary splash at The River at Rancho Mirage. The casual diner can pick from nearly a dozen restaurants — from modest Baja Fresh to pricey (and well worth it) Fleming’s Steakhouse — and, during peak hours, could wait in excess of 40 minutes for the places located smack in the middle, like The Cheesecake Factory and P.F. Chang’s. When empty stomachs enter the equation, choice also becomes an issue of accommodation, which makes Piero’s Acqua Pazza a fresh and invigorating presence within the shopping, entertainment, and dining complex.

Located in the late Prego’s digs, Piero’s offers an eclectic California bistro-fusion menu and a vibrant bar scene, two elements General Manager Luis Pereira says were paramount in the restaurant’s plans from the start. Equal thought went into the extensive interior redesign that took place, including a gravity-defying water wall separating the bar from the main dining area, extensive window treatments along the The River’s streetside promenade, and a new presentation kitchen that shows off Executive Chef Francisco DeLaTorre, formerly of Palm Desert stalwart Cuistot.

“We know there are several choices at The River,” Pereira says, “but it is also very specialized. We wanted a menu where someone can come in and no matter what they might want, we’ll have something for them.”

That’s not to say that Piero’s is a homogenous affair; in fact, it is far from it. The menu might provide a little something for everyone, but it does so at a gourmet — and priceworthy — level. Beginning with arguably the valley’s best wild mushroom soup, through an entire seafood appetizer menu (including a delicate Seared Cold Ahi drizzled with wasabi sauce and several date-perfect oyster dishes) and onto the extensive entrée options, featuring a hearty Maple Syrup and Baked Apple Glazed Grilled Pork Chop, thick Francisco-Style Braised Beef Short Ribs, Roasted Rack of Lamb, and numerous top-of-the-line pasta, pizza, salad, and panini selections, Piero’s Acqua Pazza has turned that elusive goal of accommodation into high art.

The menu developed by Pereira — who grew up in Spain, moved to France, and then cut his teeth inside the high-anxiety life of Manhattan society restaurants before landing in the desert two years ago — highlights consistency in taste and quality. He hopes the vibe of the eatery, the one thing no single meal can guarantee, becomes one synonymous with the bonhomie of an elegantly casual dining establishment coupled with the high-energy, city-center feeling The River naturally generates.

With dozens of different tequilas, 50 beers, nightly drink specials, and frequent live music, bonhomie likely won’t be an issue. And should the romantic come calling? “No one can resist our chocolate and white chocolate fondue,” Periera says, smiling broadly, his face brightening at the prospect. He’s right, of course, but you might want to eschew dinner if you hope to have room for it — or you might make the next splash at The River.