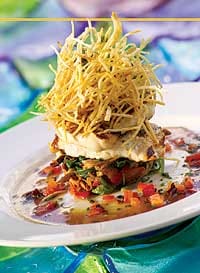 There’s something alluring about an object that dangles slightly out of reach. Take, for instance, one of Palm Springs’ most talked about new restaurants —  NOW: Never on Wednesday. Fail to pay attention to the calendar and you will learn that the hot spot’s moniker is no mere trifle; but fear not. NOW may be out of your grasp one night a week, but it welcomes you in a special way the other six.

Open since May, NOW is the debut restaurant of Executive Chef Heath Millett and his uncle/business partner Mitchell Millett. Chef Millett has garnered numerous awards as chef d’cuisine at The Westin Hotel Galleria in Dallas (including being named one of the city’s top chefs in 2003). Prior to that, he cut his teeth at the famed Manhattan celebrity haunt Moomba, a seemingly apt experience if you consider his restaurant’s quick ascent.

Located near the corner of Alejo Road and Palm Canyon Drive, in the historic bungalow that once housed Hair of the Dog, NOW has been transformed into a contemporary dinner house. Inviting sofa-style banquettes surround the wood bar and stone fireplace in a relaxed L-shape and a romantic courtyard offers steamers and heaters for all-season dining.

Since summer, crowds have steadily grown by word of mouth, a triumph that pleases Heath Millett. “We’re building a reputation substance,” he says.

NOW’s servers are bright, attentive, and knowledgeable, but the California fusion menu shines in bright, if limited, fashion. Featuring only seven entrées and nine appetizers (plus nightly specials), the casual diner might be put off by the lack of expansion, but true foodies will appreciate Chef Millett’s attention to detail, especially on items like the Steak Au Poivre, which arrives topped with caramelized onions and served with sautéed spinach. The steak is prime and tender and leaves a distinct tingling on the lips from the deft peppering of the meat.

Other menu items reflect influences both classical and whimsical: from the Pan Seared Duck Breast entrée served with truffled risotto in a roasted pumpkin alongside chanterelles, to the Lobster Fondue appetizer (a meal unto itself) with an abundant portion of lobster bathed in a tangy, cheese-based sauce served in a sourdough vol-au-vent. Chef Millett shows a refreshing tendency to buck convention with his menu choices, which he says will change seasonally.

With a keen understanding of his clientele, Mitchell Millett, a former aviation executive, boils it down to fulfilling two objectives: “Excellent service and excellent food. Food is my passion, and we’re trying to create an experience here from the moment you walk through the door.”

The experience so far has been pleasant — minus, of course, any Wednesday-night diners who neglect to unravel the acronym that is the restaurant’s name.