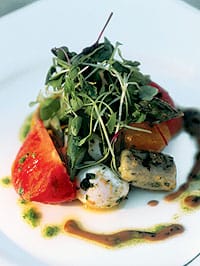 Ten years ago, if someone said that men and women alike would spend hours each day watching chefs cook on television — to the point that folks like Rachel Ray and Emeril Legasse would become as recognizable as Cameron Diaz and Carson Daly — a sound round of scoffing would have ensued. Cut to today and our impressions of who and what a chef should be have been irrevocably changed, which is not a bad thing if you happen to be Andrew Manion Copley, namesake of Copley’s on Palm Canyon Drive.

“I can’t wait to get outside and show people how they can make some of the meals we do here in their own homes,” Copley says.

Before anyone gets too excited, Copley has no plans to ply his wares door to door; rather, he uses his restaurant’s expansive, secret herb-garden setting — the former estate of Cary Grant, now a prime Sunday brunch spot — for live demonstrations for the public, using household appliances like the ones in our own kitchens.

It seems the perfect setting for Copley, an Australian native whose surfer looks and easy charm belie vast award-winning experience in the world’s top kitchens (from the Queen Elizabeth ocean liner to Ritz-Carlton flagships in Maui and San Francisco to The Lodge at Koele on the island of Lanai) — the fruits of which are on full display nightly at his own concern. For a man used to riding waves and seeing water, the desert has quickly become a new kind of paradise.

“Every morning I sit out in the herb garden with a cup of coffee and stare at the mountains,” he says. “I never realized how much I’d love being here.”

The feeling for diners appears mutual.

With nine regular entrées and nightly specials (including the wildly popular short ribs), Copley’s leans heavily on traditional favorites but then flips the script and does something fresh and original. Take the Pot Pie, for instance. Yes, there are mushrooms, onions, and carrots bathed in a creamy velouté sauce, but the base meats are lobster and jumbo shrimp, the mushrooms are wild, the onions are pearl, the carrots are baby. Or indulge in the Wild Mushroom Crusted Sea Bass, which comes atop a five-herb risotto that could be its own entrée. At Copley’s, however, it is a palate counterbalance that heightens the rich, natural flavor of the bass.

The coup de grace is the delicate Char-Grilled Beef Filet served with Lobster Mashed Potatoes. The filet is expertly prepared with a light glaze of black pepper and thyme jus, while the potatoes contain a bite of lobster in every mouthful.

It’s an appropriate mix of elegance and caprice that the restaurant’s one-time tenant, Mr. Grant, achieved over and over again and that Andrew Manion Copley has replicated to satisfying success. His restaurant is Palm Springs’ latest culinary gem.