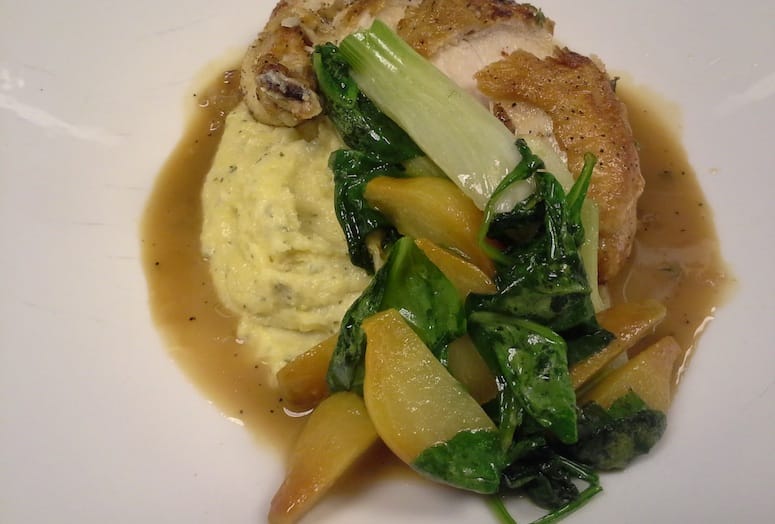 Just barely on the job this month, Executive Chef Kitt Fraser is excited about creating a new Mediterranean-influenced menu for Europa at Villa Royale in Palm Springs.

He plans to source locally as possible for produce and products, especially since California’s climate is similar to the Mediterranean. An on-property greenhouse will soon be flourishing with fresh herbs Fraser is planting.

“The menu will have French, Italian, Spanish and Greek influences,” says the chef whose early exposure to these cuisines was first-hand as a Navy brat. “I love Mediterranean cuisine.”

From about ages 4 to 8, his father, a naval officer, was stationed in England, and Fraser’s family traveled throughout the British Isles and France, Spain, Italy and Malta. From these early years, he said certain aromas still evoke strong memories for him. “Some aromas bring back distinct memories of Italy,” he says.  “Fresh linen and baked bread are background to memories of tea and jam in England.”

Born in California, Fraser’s life in the U.S. has been bi-coastal as well. He lived on the east coast after his family returned from England to graduate high school and attend community college in Virginia, where he started his culinary career as a dishwasher in a local restaurant.

Among Fraser’s popular dishes that may soon debut on Europa’s menu are Jidori chicken with soft polenta, seared scallops and petit filet of beef, Scottish salmon with mint yogurt, pork loin with fingerling potatoes, and scallops with mushrooms and black figs.

Fraser says he is already planning his first wine dinner on Oct. 8, a five-course pairing with Fess Parker wineries that includes a viognier, chardonnay, pinot noir, Big Easy (a red blend), and port wine for $75 per person.

“I read on their website that Europa makes you feel like you’ve been transported to an intimate castle in Europe,” he says. “Then when I saw it, I thought, ‘I really want to work here!’”

Europa is open to the public for dinner nightly, and for brunch and lunch seasonally.