Evelozcity Offers a Future With Engineless Vehicles at Desert X 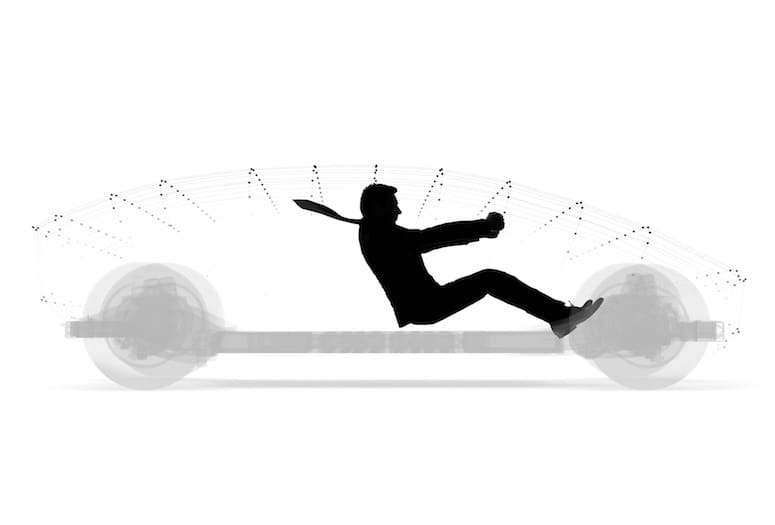 Evelozcity is a year-old electric vehicle startup, bankrolled by a trio of private investors, founded in a garage in El Segundo, and now headquartered in an industrial stretch of Torrance. Like all great startups born in a garage — Microsoft, Apple, Amazon — the company has grand ambitions. It wants to redefine mobility. It is attempting to achieve this with innovative design and engineering and a subscription-based sales model. But any new company must also build a brand. Evelozcity’s first foray was as a major sponsor of Desert X, the exhibition of site-specific art that took over the Coachella Valley, extending down to the Salton Sea, this spring.

“Art is a different language to send a message [with], one more open to interpretation,” says Stefan Krause, the company’s “in charge” (Evelozcity’s punny, electrified nomenclature for CEO). “Art and fashion challenge the inability of human minds to accept new forms and languages. At the leading edge of mobility, this is similar. We’ve started to deconstruct design. And we’re most likely to find early adopters and innovators in people who love fashion and art. I think they will get it.”

Evelozcity will not launch its first car until the second half of 2021, and the company revealed nary
a rough design sketch until well after Desert X opened in February. Nor has it begun advertising. As a brand, it’s only a name, and as it turns out, not even that is nailed down. In March, it announced a moniker change to Canoo.

The firm’s presence at the art event was thus ephemeral, almost an installation of its own: abstract, suggestive, and fleeting. There was a series of podcasts, featuring KCRW “DnA: Design and Architecture” host Frances Anderton talking with Desert X artists and curators; it was meant to be heard at or between sites — a contemporary take on the mobile driving tour. There was a trio of hubs (Palm Springs, Palm Desert, and Indio) where visitors could utilize a tablet-based drawing tool to create free-form car designs. And there was a series of enigmatic billboards announcing cheeky slogans (“It’s Like a Free-Range
Vehicle, You Know?”) that recalled the odd painted pronouncements of Ed Ruscha.

“Desert X may have been a bit too early for us,” Krause says of foisting his brand’s incipience on the exhibition’s crowds. But he is a firm believer in the event and sees a great alignment between it and Canoo’s intended positioning.

“Art and fashion challenge the inability of human minds to accept new forms and languages. At the leading edge of mobility, this is similar. And we’re most likely to find early adopters and innovators in people who love fashion and art.”

“It’s an insider perspective and an insider crowd [at Desert X]. It has a niche sensibility, but we have a feeling that it will become a really big thing over time — and it is not born out of some commercial interest like Art Basel. Also, being a green electric vehicle company, it’s interesting to have it near the Salton Sea, this ecological disaster.” Moreover, there’s a mobile component built into the event. “It’s cool to have an art exhibit that you have to visit with a car,” Krause says.

Desert X is a biennial event, and Canoo expects to return as a major sponsor in 2021, when it might actually have a car to display and even offer up for use. That vehicle will be built on a universal “skateboard” — a flattened assembly of batteries, motors, wheels, and suspension components — that will under-pin many of the brand’s future products. Various “top-hats” in different body styles will be placed atop this platform.

The design of these vehicles will take advantage of the new forms and shapes afforded when a car no longer needs a hood to cover an engine, a tunnel through the interior to house a transmission, or a rear seating area constricted by a big gasoline tank under the passenger compartment. Canoo is thus reimagining what a vehicle can look like, just as minimalist and light-and-space artists reimagined what sculpture could be. 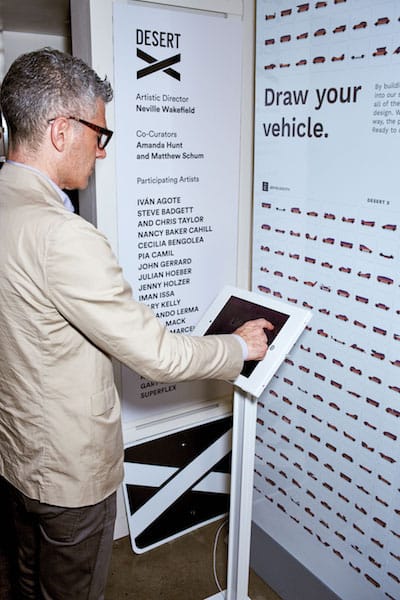 During Desert X, Evelozcity installed kiosks where visitors drew their own car designs.

The vehicle’s core aesthetic, according to design head (“in charge of design”) Richard Kim, looks familiar to people who live in the desert communities. “Stark, beyond minimalism, almost Zen,” Kim says. “A blank canvas inspired by midcentury modern materials and design language.” He describes the look of the company’s vehicles as “no-design design,” likening it to the absolute elemental reduction of popular tech objects like the iPhone or Amazon Echo. “We think that this generation and future generations will care less about gimmicks and more about utilization.”

Between now and the next Desert X, Canoo plans to continue its patronage of the arts. “There is someone building an art museum in China in some of those old, big tanks where petrol is stored, and we would like to support something like that,” Krause says. “Someplace recycled from the era of the internal combustion engine. Something where, in the electric future we imagine, we won’t need them.”