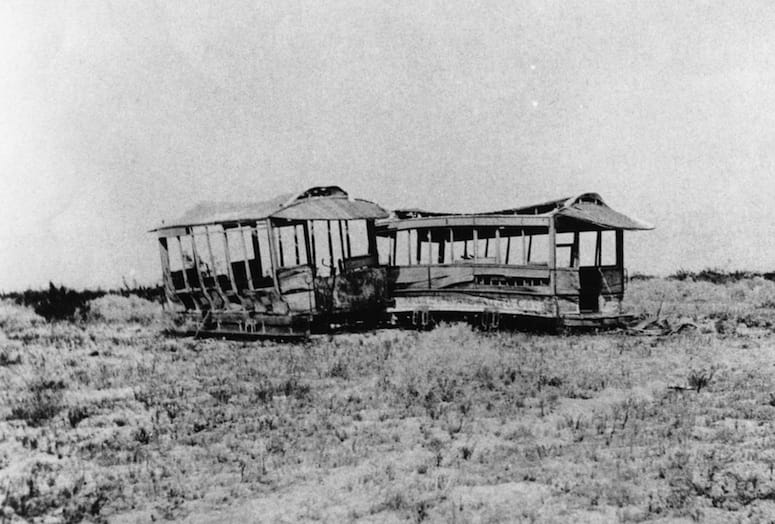 The Colorado Desert settlements of Palm Springs, Palmdale and the Garden of Eden, which today would all sit within the city limits of Palm Springs, were part of a real estate boom that reverberated across the state of California between 1880 and 1889.

A syndicate whose purpose was to subdivide and sell parcels of land to buyers looking for a “get rich quick scheme” procured two thousand acres. Buyers could purchase land before they doubled, tripled or quadrupled in price.

The syndicate proposed to build a railroad that would run from the Southern Pacific Railroad train station at Seven Springs to the Palmdale tract located close to where Smoke Tree Ranch is located today.

The construction was completed on the narrow gauge tract and the first train was scheduled to go over the tracks in time for a big Fourth of July celebration.

The train consisted of three flat cars and two bright-yellow passenger cars, which were actually nothing more than San Francisco street cars. The engine was finished in black and was equipped with a “cheese-box” smokestack, a bell and a whistle.

Roundhouses at both ends of the tract, shaped like a Y, were used to turn the engine around for the return trip.
The real estate boom collapsed from San Diego to Santa Barbara in 1889 and the little train was abandoned on its track to bleach and warp in the desert sun.

The walls of the adobe roundhouse still stand inside the gates of Smoke Tree Ranch.