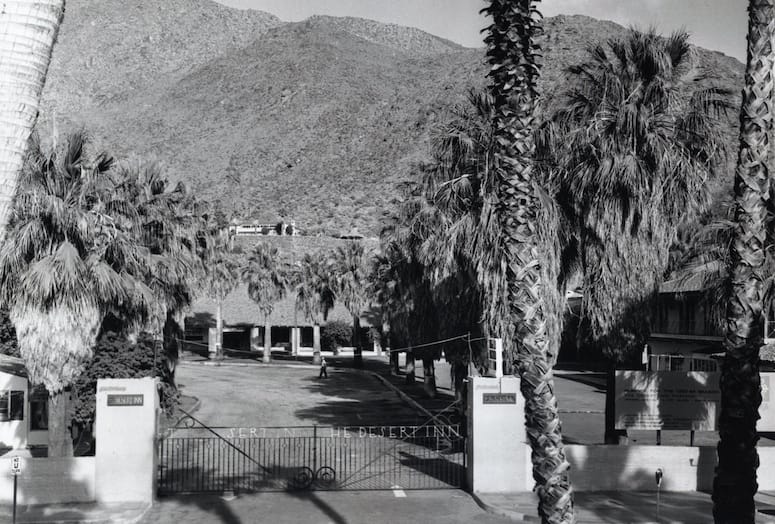 The year 1909 marked the opening of what would be a catalyst for Palm Springs growth and recognition.

Here in a desolate desert landscape, Nellie Coffman saw an oasis. Arriving in Palm Springs in 1909 with little more than a dream (just $2,000 actually), Nellie would forever change the landscape of the desert where she settled.

In 1942, famed journalist Ernie Pyle says of Nellie, “She started what was to become the whole vast vogue of desert vacationing, all the great resorts – Tucson and Phoenix and Death Valley – the fancy hotels and the southwest dude ranches and the thousands in trailers who have discovered the uncanny lure of the desert, it all started with Mother Coffman. The whole thing was built on one woman’s spiritual love of the desert.”

The Desert Inn was Nellie’s vision in 1909. In the beginning, The Desert Inn was made up of small wood-framed buildings covered in fabric called “tent houses.” In those days, it encompassed only 75 feet of Main Street (now Palm Canyon Drive) and went only 290 feet west toward the mountain.

It began as a sanatorium where Nellie’s husband, Harry Coffman, served as the physician. Eventually Nellie and Harry went separate ways and Nellie’s vision of The Desert Inn as an elite resort began to take shape.

It was not long before visitors were making their way to Palm Springs and noteworthy individuals were taking notice of Nellie’s inn. In the 1920’s, Nellie replaced her humble wood-framed structures with Spanish Mediterranean style buildings. The Inn’s presence could not help but shape Palm Springs and in 1938, when the city incorporated, the center of town was changed from Amado Road to Tahquitz, where The Desert Inn was located.

The Inn subsequently enjoyed decades of success with Nellie at the helm. After Nellie’s death in 1950, sons George Roberson and Earl Coffman, who had continuously assisted Nellie in the operation of the Inn, sold it in 1955 to actress Marion Davies, perhaps most memorably known as William Randolph Hearst’s mistress.

Davies had hopeful dreams for the Inn but as her health was failing, her plans did not come to fruition. In 1960, Davies sold the property to developers Samuel Firks and George Alexander. The purchase price was $2.5 million and at the time was one of the largest single transactions to ever take place in Palm Springs.

At the time, Alexander said, “There will always be a Desert Inn on this property. Perhaps not the current establishment, but always a Desert Inn. The name has come to symbolize the ultimate in resort living.”

Alexander had a lofty vision of what would take the place of The Desert Inn; including a commercial mall, 1,100 parking spaces, a convention center, a 450-room hotel, and even the city’s first skyscraper. This momentous plan was never to be completed as in 1965, Alexander and several members of his family were killed in a plane crash just outside of Palm Springs.

After his death, Home Savings and Loan Association took over the property and built an expansive multi-million dollar shopping mall called The Desert Inn Fashion Plaza. This photograph was taken in June of 1966 just before demolition began on the original structures of The Desert Inn.