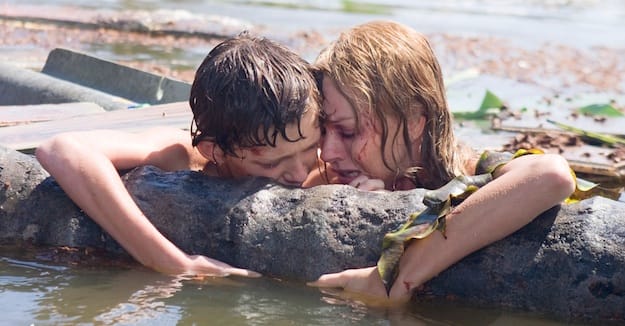 Naomi Watts and Tom Holland from "The Impossible".
Summit Entertainment

Few of us can fathom the horrors of the Indian Ocean tsunami that struck Dec. 26, 2004. Director J.A. Bayona ("The Orphanage") brings the story of one family’s fight for survival to the big screen in "The Impossible".

Naomi Watts portrays Maria, wife and mother to three young boys. She and her husband Henry (Ewan McGregor) have just celebrated the Christmas holiday with their sons the night before. However, while relaxing near the hotel pool, a violent wall of murky water alters everything they know about survival and comfort. As the horrific events transpire, Maria must fight for her life as her husband and boys struggle to find each other.

"The Impossible" is based on the true story of the Alvarez Belon family. Its matriarch, Maria, was on-set during filming and proved a constant source of inspiration to the production. Watts — who is the real-life mother of two sons with actor Liev Schreiber — was instantly attracted to the story, as she explained at the film's recent junket.

“When I first read the script, I thought, ‘Wow, it sounds so clear and true, not like someone just decided to use this tsunami as a terrible backdrop for this family'. I later found out that much of it was based on Maria and Henry’s words and their experiences. It was incredibly powerful to meet her and talk to her about it. She was so generous and helpful and right there every time. She is incredibly strong and courageous,” said Watts, who will be honored at the Palm Springs International Film Festival's Gala Awards for her role in "The Impossible" on Jan. 5 at the Palm Springs Convention Center.

Just as equally important was the Australian actress’s onscreen relationship with Tom Holland — the young actor who plays her eldest son, Lucas. The tsunami ravages everything in its wake, but mother and son manage to help each other survive. Off-screen, Watts and Holland shared the same protective relationship that their characters possessed.

“Working with Naomi has just been incredible,” Holland said. "I have learned so much from her, in terms of how to play things. She’s so generous with her acting — even if she’s not on camera, she will give it her best to help you.”

Aside from its gripping performances, the film's special effects are a marvel; the production team collaborated with six effects companies and took over a year to recreate the horrific natural disaster, which claimed the lives of nearly 300,000 people across 11 countries.

For Watts, the logistics of shooting in violent and torrential water proved difficult.

“That was definitely the most challenging part of [making] the movie,” Watts recalled. “It was a hard thing to do for a month. I remember J.A. telling me lines to say, and I was like, ‘I can’t speak. I’ve got a mouthful of water.’”

Ultimately, her fortitude transferred seamlessly into her character’s plight, resulting in one of the year’s more sympathetic and moving performances. With so many tragedies unfolding in the world, "The Impossible" delivers hope for those most in need of it.