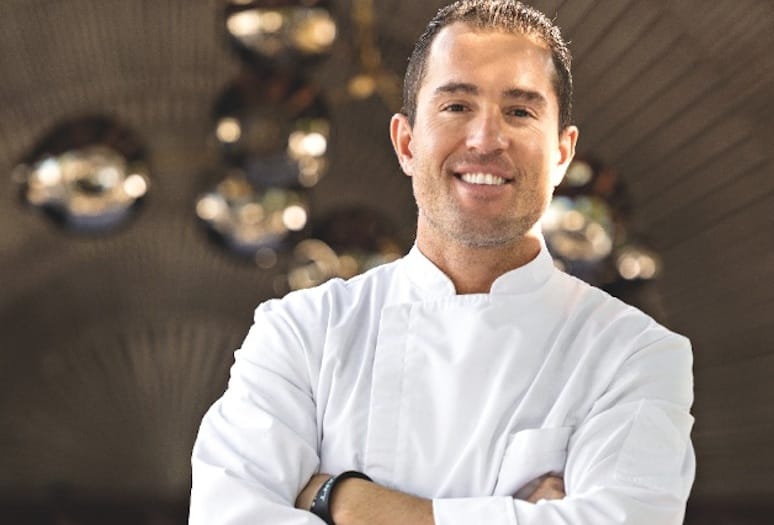 At 14, an age when most of us can’t decide between Xbox or PlayStation, Giacomo Pettinari knew what he wanted to do for the rest of his life. He enrolled in Panzini Culinary School in Loreto, Italy, and has never looked back.

Currently, he’s the only chef in the valley with a Michelin-starred restaurant pedigree (Valentino Santa Monica), and he’s cooking for us at SO.PA at L’Horizon Hotel. Pettinari’s palate skews light, healthful, and creative, as befits someone who worked kitchens in London, Barcelona, Bangkok, and Santa Monica. He learned what it takes to earn a Michelin star in Los Angeles and how to make sushi in Bangkok.

All of his travels taught him that, although he was smitten first in his mother’s kitchen, consummating a love of cooking is a global pursuit.

Pettinari emphasizes organic ingredients to render the singular flavors that invoke California, the Mediterranean, and the Middle East. “Now that the season is here,” he says, “I go to the Farmers Markets on Wednesdays and Saturdays, plus (I buy) from a friend of mine who sources mushrooms and fishes.”

SO.PA’s alfresco setting is the perfect mis-en-scène for Pettinari’s au naturel creations, which you can enjoy for breakfast, lunch, or dinner. photo courtesy of the avalon hotel

Andrew Verrier took over the kitchen last summer, as the Viceroy was morphing into the Avalon, and Citron into Chi Chi. This is why we like evolution — things get better.

Verrier, originally from San Diego, studied the culinary arts at Johnson & Wales in Denver, went abroad to flex his new cooking muscles in Spain, Italy, and France, and came home to several restaurants in Arizona before raising his bar even higher and working  here with renowned chef Jose Garces at Tinto and El Jefe (The Saguaro).

As a native Southwesterner, his love for Latin flavors finds full voice on Chi Chi’s health-and-wellness stage. He and F10 Group’s Tara Lazar collaborated on the restaurant’s concept and menu, and it embraces diners of both a vegetarian and paleo persuasion.

Verrier is happiest in the kitchen — it’s in his DNA. His father was a chef at the Four Seasons Hotel  in Boston before the elder Verrier went rogue and opened an Italian pastry shop. Young Verrier was baking before he was driving. “I am happiest when I have extremely satisfied customers,” says Verrier, whose favorite dish on the menu is Scallops al Pastor. “That is what the industry is about: pleasing guests.” Food deity Wolfgang Puck has elevated another of his loyal acolytes. May we introduce you to Matt Leverty, formally of Spago Las Vegas.

These days, he rules over WP Kitchen + Bar on El Paseo, which takes the place of the former Wolfgang Puck Pizza Bar, a space that was more cave than light. As desert residents, we like to let the sunshine in.

Leverty’s mission is to retain the singular Puck passion (pizza!) and fun (knuckle sandwich), but elevate the fare with meat and seafood dishes that reach the sophistication serious valley diners seek.

A Minnesota native who has climbed within the Puck empire from line cook to sous chef to kitchen manager to the guy with the final food word, Leverty is a first-time Californian who’s happy with what he calls our desert’s more “normal” pace of life than the day-is-night day lunacy of Vegas.

At WP Kitchen + Bar, the initials are those of the founder, but it’s where Leverty is making his mark. A native Midwesterner, Robert Wepplo took Horace Greeley’s advice, and went West to become the seasoned culinarian he is today. He has worked in kitchens across the best third of the continent from Colorado to New Mexico, finally  landing in the Coachella Valley, where the influence of farm-to-table pioneer Alice Waters has blossomed fully.
Formerly executive chef at Plate | Glass and Hacienda Cantina & Beach Club in Palm Springs, and Piero’s PizzaVino in Palm Desert, Wepplo is now fully invested in sustainable eating at Essense, marrying bold flavors with wholesome fare.
But he sacrifices nothing to enjoyment of a meal, ensuring that delicious is an equal partner with conscious and responsible. His goal is to “indulge the palate, seduce the senses, and feed the passion.”
Although Wepplo isn’t new to creating superior cuisine, nor new to the Coachella Valley, he’s included here because, at Essense, he summits the tricky peak of eating for pleasure as well as health. What he cooks is good for you, and for the planet. In the tradition of Billy Joel, an uptown district needs an uptown cuisine, and Chuck Courtney is the guy to create it.

The owners of Eight4Nine, Willie Rhine and John  Paschal, had been noodling out their idea for a place of comfort and class when Courtney, as they say, “became available” to put the food function into the design form.

Paschal harbored fond memories of dining at Citron when its chef was Courtney. After working at four-star resorts here (The Viceroy), and in the Bay Area and the Pacific Northwest for 10 years, Courtney was back in the Coachella Valley and excited about the new concept.

“It’s a different take, yet still familiar food,” says the native Angeleno. “What I do best is elevate comfort food — not the foams or molecular stuff — but healthy; what I call West Coast modern America.”

Courtney takes the essence of a dish and gives it a makeover, but not the bad kind, where people snicker over the results. It’s the kind that tarts up a ratatouille with stacked sauteed squash and tomatoes, then gives it a bath of fresh tomato pan sauce.

Among Courtney’s many admirers are Bon Appetit, Wine Spectator, and The New York Times.