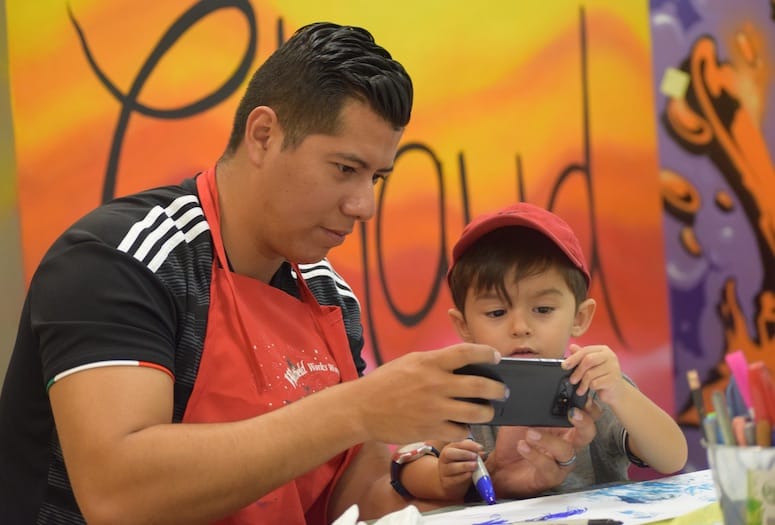 “I’m graduating next year and I wanted my last summer as a student to be filled with creativity,” says Lily Mata, 17. “I’m trying to get in touch with my creative side before I go off into the scary real world.”

As her grandmother watched, Mata put the final touches on a T-shirt she made for her nephew, Bodhi, who will turn 1-year-old in August. His name translates to “enlightenment” in Sanskrit, so Mata decorated the front of the shirt with Japanese characters spelling out “live, laugh, love.”

“I made sure the ‘love’ was glowing red,” she points out.

This is Mata’s third week of attending the Art Labs, a hands-on, all-ages artmaking workshop held every Sunday afternoon at the Westfield Palm Desert. It’s a joint project of the mall and Flat Black art supply, one of the mall’s newest tenants. A $10 entry fee covers art supplies, instruction, and two hours of experimentation with non-toxic spray paint, stencils, markers, and glitter. Participants can try their hand at making custom clothing or paintings. Or they can just doodle.

“Last week we did calligraphy,” says Lise Choukroun, Flat Black’s events manager. “We had a little boy who was drawing a robot. They don’t have to do the prompts; they can do whatever they want. His mom was drawing one of the hardest fonts we had. She did it with pencil first, then pen. It was amazing.” Choukroun says the mother had never tried calligraphy but she was a manicurist. The Art Lab enabled her to learn something new while spending time with her son.

“Most paint workshops give you a canvas and a picture of what your canvas is supposed to look like at the end. We want to do the opposite,” Choukroun says. “All humans are naturally creative. When we become adults, we forget to play and tinker. That’s why the name ‘Art Lab.’” 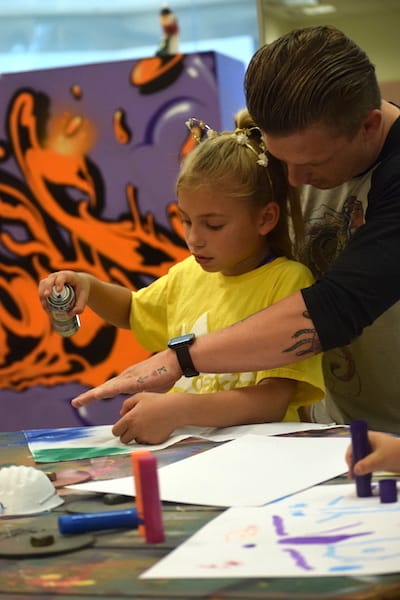 Shopping centers are similarly tinkering, looking for ways to return to their roots as social centers. Choukroun thinks a switch from consumption to creation might be the solution — what she calls “the malls of doing.” She wants to link up with public schools to reach more kids and teenagers. She enjoys showing them how to create subtle color blends and visual effects through hand-cut stencils and spray paint.

“I’m happy to see that, culturally, there’s a little more acceptance, because it’s a fun medium,” she says.

In addition to the weekly Art Labs, Westfield Palm Desert and Flat Black are rolling out Art Walks, held on the first Sunday of each month. More than 30 local artists and craftspeople present handmade products ranging from skincare to jewelry, accompanied by music, food, and art demonstrations. The response has been strong, and each month the event occupies a larger space in the mall. 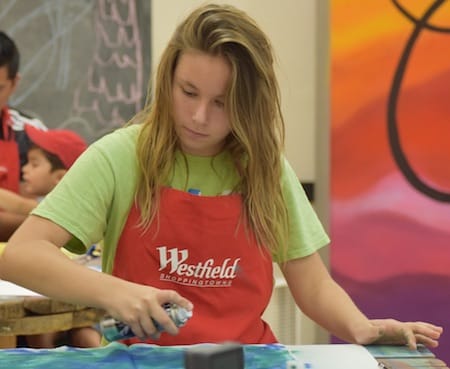 A popular vendor is Palm Springs-based Albert Gradilla, who goes by The Desert Movement on Instagram. His wry take on valley references — Highway 111, windmills, the occasional sunbaked skull — turn hats and shirts into hot collectibles.

Franchesca Forrer, marketing director for Westfield Palm Desert, says the partnership with Flat Black brings in residents who might not have been to the mall in awhile, as well as tourists and snowbirds. It all started with “Street,” the rooftop party held each November. Coming up on its fifth year, the nighttime event attracts some of the biggest names in street art, such as Michelle Guerrero, known as “Mrbbaby,” and John “MDMN” Moody.

“Street” became the foundation for Westfield Walls, the mall’s art and culture program. Besides the Art Labs and Art Walks, it includes more than 60 murals and sculptures placed inside and outside the mall, and is being adopted as a model by other Westfield centers around the country. “It adds energy and color and dimension,” says Forrer. “Being a community gathering space, as much as a place where you can shop and dine, is key.”

“It showcases artists that I don’t think we would otherwise see,” says Forrer. “Not all of us are going to museums every day — I’m not — so it’s nice to encounter art where you least expect it.”

Along with drawing shoppers, these activities ride the wave of interest in the desert’s art scene, sustaining momentum from events like Coachella Music and Arts Festival and Desert X. “We are a setting where some extraordinary music and art is happening on a global scale,” Forrer says. “The more that we leverage that as a community and celebrate extraordinary local talent, not just the big artists and musicians that come here, the more distinct we become every day.”

The driving force behind these programs is Pete Salcido, owner of Flat Black art supply. A combination retail store, gallery, and art studio, Flat Black serves as a hub for creators and fans of urban art. On July 13, the store will have a grand opening in collaboration with hip-hop musicians Provoked and WillDaBeast, who will be releasing their new self-titled record.

The shop’s name comes from Salcido’s favorite spray paint, Krylon’s Ultra Flat Black. It’s a nod to his younger days as an underground graffiti writer, but he says it also refers to “living in a world that was dark, like flat black. We’re here adding color.” 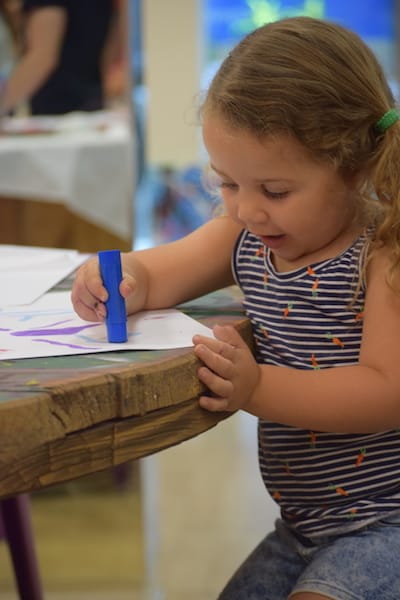 Until July 31, register to win a 7-foot by 7-foot original work of art and $250 Westfield gift card. Each month, you can snap a selfie with the art, tag it with @westfieldpd #westfieldwalls, and you will be entered to win a $50 gift card. No purchase necessary; see westfield.com/palmdesert for details