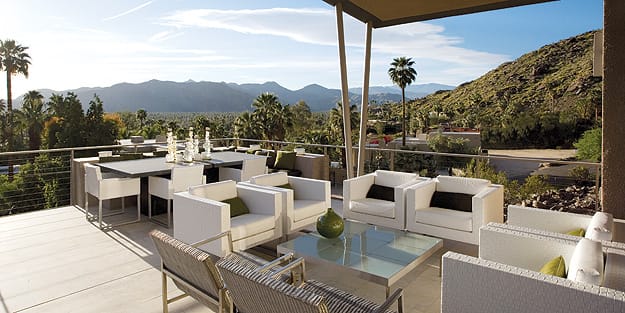 In the highest part of Palm Springs’ Mesa, the street dead ends in front of a chic glass and steel contemporary. Its supermodel good looks may at first blush appear out of place perched on the uneven, rocky terrain. But beyond the pretty face, one sees the approachable personality in the thoughtful counterbalance that architect Tom Jakway achieves inside and outside of the house he built for himself in 2007.

It’s probable that the aesthetic balance in his work is one reason he’s hired to design houses around the country and in the valley’s poshest enclaves: The Vintage Club, Bighorn Golf Club, The Reserve, Eldorado Country Club, Tamarisk Country Club, Tradition Golf Club, and Thunderbird. But don’t expect to drive down the streets of these clubs and be able to point to a Jakway design, which this architect sees as the real beauty in what he does. “I respond very directly to the client’s taste and direction to create something that’s one-of-a-kind,” he declares. “I get people … to take a leap of faith.”

OPPOSITES ATTRACT
Jakway designed an ethereal laminated, tempered glass stairway for his home’s front entry that, when enveloped by shafts of sunlight, turns the color of the Caribbean. He carefully balances this airy structure with a down-to-earth, scooped-out hunk of black granite in the second-floor master bath, the tub’s polished interior the perfect spot to soak near a cozy two-sided fireplace.

This “opposites attract” philosophy is repeated throughout the home that Jakway describes as updated midcentury, its personality swaying from citified modern furnishings to a provincial herb garden and backyard sitting area created around an old stone ruin on the property. Even the boulders that were excavated on the site and used in the landscape are juxtaposed against the home’s jauntily angled roof that juts skyward over the front terrace, its zinc fascia supported on slender pipes. “Having this deck in the front is almost like you’re in an airplane,” Jakway says as he looks eastward over the valley floor. “It’s unique in the desert to be in the air with such a broad vista.”

Jakway is no stranger to this spot, having grown up just two houses away. He designed his first house at the age of 16 — and at 17 drew the architectural plans for the home of his family’s new neighbors on the mesa: Natalie Wood and Robert Wagner. He left the valley for Los Angeles to attend college and studied in Italy before returning to intern with one of Palm Springs’ most notable architects: Donald Wexler. Jakway’s own firm followed.

“I have an unique opportunity,” he says. “A lot of architects are just a cog in a big firm that does commercial, developer, and institutional work where the whole purpose is driven by image, budget, or profit. I design for specific people based on their lifestyles. I’m on the outside looking in on the lives of some of the wealthiest people in the world.”

FORM EQUALS FUNCTION
If there is one design technique that defines Jakway, it’s his treatment of ceilings, where soffits, moldings, and lighting add dimension to a room. “We’re now doing designs with one big space that has multiple uses, but it will have three or four different ceiling treatments that help define the uses and give some delineation,” he says. Look up and see the boxed plaster beams with grasscloth insets in his living and dining rooms. The powder room ceiling is painted a rich licorice, while the master bedroom boasts soffits with a higher ceiling in the center surrounded by a 1-inch HVAC slot. “This lets the ceiling ‘float’ by not seeming attached to the soffit,” Jakway says.

Form and function share equal billing here. Everywhere you sit, you’re surrounded by art, which Jakway accommodates with vertical slits of glass to create individual wall panels for his collection. Lighting specific to each piece is tucked discreetly behind the ceiling curb. “The HVAC slots around the ceiling also disappear behind the curb. Functionally, it makes the system work well, since you’re just dropping a very low-velocity curtain of air evenly through the living room and master bedroom,” he explains. Function continues to hold its own when the floor-to-ceiling glass doors in the living room are pushed back into the walls. “The outdoor terrace becomes part of the room,” Jakway says, “and almost every room has light coming in from two sides.”

Jakway’s inspiration comes from multiple sources. “I used a lot of built-ins in the master bedroom — the bed platform, headboard, the entertainment cabinet, and night tables.” John Lautner and Frank Lloyd Wright inspire him.

In his 3,500-square-foot house, whose layout gives a much larger vibe, Jakway says that living surrounded by his art — ranging from the ornate to the starkly simple — also makes this place special. Just outside the home’s glass-paneled double front doors, a woman greets visitors — or, rather, a woman’s head that’s 8 feet tall and weighs more than 1,000 pounds, her beatific bronze gaze sculpted by a young artist from Mexico: Javier Marin.

Sculpture and paintings by well-known artists share space with lesser-known craft art that captured Jakway’s fancy on trips to Africa, Latin America, China, the South Pacific, and Europe. “Years ago, a wonderful client of mine who has a great art collection advised me that when collecting art from established artists to either acquire one perfect original or, for the same investment, acquire a number of edition pieces,” Jakway says. “I chose the latter path.” Works signed by David Hockney, Roy Lichtenstein, Rufino Tamayo, Sam Francis, and Francis Bacon dot the walls of his home.

THE ART IS IN THE DETAILS
When Jakway begins the design process for a client’s home, he first gets a feel for the style and budget. “Then, I like to go away, take a trip to the beach for three or four days, and start scribbling and scratching on a pad of paper. Invariably, on the plane ride home, I’ll draw the initial layout for the house,” he says. For his own home, he kept in mind a maxim among the architectural community: Most architects don’t live in a house they design because they’d never stop designing. “That’s why I had interior designer Donna Dunn involved; sometimes you need another person who is less invested to make choices,” he says. Dunn chose paint colors, granite, living and dining room furniture, including the Brustlin Workshop dining table with its walnut top, steel base, and bronze-lined center trough. Jakway designed the white oak, black-stained floor pattern and drew simple sketches, such as the one for the powder room cabinet. Dunn’s firm took that initial sketch to create a cold-rolled steel and wenge wood piece that supports an underlit laminated glass sink. “It really was a collaboration,” Jakway says.

Having worked on other projects with Jakway, Dunn immediately understood the balancing act this one required. “Tom had a lot of objects already — artwork, sculpture, and an antique Venetian [Murano glass] chandelier. The chandelier is one of my favorite things, but it needed a couple of other traditional items in the house to make it work,” Dunn says. She introduced what she calls “funky” elements that balance the home’s masculine and feminine features, like throw pillows; the rounded, softer-looking dining chairs; and the taupe-colored rug with a black scroll pattern at the base of the glass and steel staircase. “I don’t think people expect to see that rug, but it’s very subtle and carries the eclectic feel, yet softens the space,” she says.

It’s carefully crafted details that set a Jakway-designed house proudly apart from the pack. His master shower has a shaving mirror recessed into the granite wall, heated from the back so as not to fog up. Off the kitchen is a barbecue deck with a planter box filled with fresh herbs. “It saves a dash up and down the stairs [to the herb garden] while cooking,” he says. On a larger scale, for those unable to climb that stairway to heaven, an elevator is there to whisk them to the second floor.

But some of the most unusual features Jakway has designed are in clients’ homes, like a moat to keep a homeowner’s Dobermans contained or the request for an ice hockey rink in a new home’s basement (Jakway wondered where they would park the Zamboni and convinced the homeowners that a basketball court, climbing wall, and billiards room would be more practical). “I designed a ledge for a client’s salad plate once — in the master shower,” Jakway laughs. “He was notoriously late, so while dinner guests were served their salads in the dining room, he ate his while he showered.”

As he shows visitors outdoors to his fireplace and herb garden surrounded by the stone ruin, he begins a story about this historical remnant from what was once likely the foundation of a casino during the Roaring ’20s. He climbed and played on these same rocks as a boy, he says, and one gets the distinct feeling that, with every new project, the architect has that same eager and inquisitive gaze.