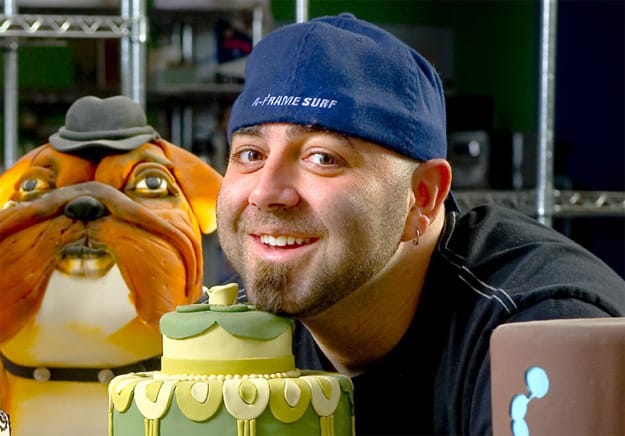 While studying at the Culinary Institute of America at Greystone, Duff Goldman was a stagiaire at Napa Valley’s most renowned restaurant: Thomas Keller’s The French Laundry. Duff left California to become executive pastry chef at Vail Cascade Hotel and Resort in Vail, Colo. He left that job to bake bread for Todd English’s Olives restaurant in Washington, D.C., then opened Charm City Cakes in Baltimore, Md.

In 2006, after he made several appearances on its Challenge series, Food Network tapped Duff and his fellow baking artists at Charm City Cakes to star in Ace of Cakes. Ten seasons later, the show is broadcast in more than 40 countries.

Duff also stars in the Food Network series The Best Thing I Ever Ate and has been featured in Iron Chef America; The Next Food Network Star; Diners, Drive-Ins, and Dives; Chefs vs. City; and Cupcake Wars. Duff made his first foray into the publishing world with Ace of Cakes: Inside the World of Charm City Cakes.

Known for his tenure as chef of Chez Panisse Restaurant in Berkeley and chef/co-owner of Oliveto Restaurant in Oakland, Paul Bertolli has devoted the past 15 years honing his skills in the production of traditional Italian cured meats. A James Beard award winner and cookbook author, he founded Fra’ Mani in 2006 and offers consulting services to the wine and food industries.

BRADLEY OGDEN’S eponymous restaurant at Caesars Palace has been recognized by Robb Report as the Best of the Best and by Gourmet among America’s Best Restaurants. In addition to publishing Bradley Ogden’s Breakfast, Lunch & Dinner (1991), Bradley has shared his innovative cooking throughout California as co-owner of Lark Creek restaurants in San Mateo and Walnut Creek; the venerable One Market Restaurant in San Francisco; Yankee Pier in Larkspur and San Jose; Parcel 104 in Santa Clara; and Arterra in San Diego. His second cookbook is due to be released this year by The Running Press.

Bradley graduated with honors from the Culinary Institute of America and received the Richard T. Keating Award for the student most likely to succeed. In 2000, the CIA honored him as Chef of the Year. Among his other numerous awards and honors, he was named Best California Chef by the James Beard Foundation. He received the 2004 James Beard Award for Best New Restaurant. A pioneer in farm-to-table dining, Jimmy Schmidt founded Chefs Collaborative, a nonprofit devoted to fostering a sustainable food system, and was one of the original board members of The James Beard Foundation. He is also a founding board member of and adviser to Share Our Strength, dedicated to making sure that no child in America grows up hungry.

When not at Morgan’s in the desert at La Quinta Resort & Club, Jimmy devotes his time to nutritional product development. He is the creator of the LifeForceV beverage and has served as the director of sports nutrition for GM/Corvette Racing. He has coordinated catering services for the 24 Hours of Le Mans since 1999.

Born and raised in Westchester, N.Y., Bridget Bueche started her own catering service at the age of 14. In 1993, she graduated from the Culinary Institute of America. For three successive years, her summer job was serving as personal chef to Walter Cronkite in Martha’s Vineyard. Bridget co-founded a catering business in Santa Barbara, simultaneously providing personal chef services for an elite list of clients, including Geena Davis and Michael Douglas. In 1997, she sold her catering business and moved to San Diego, where she took a position with Purcell Murray, representing such brands as La Cornue, Gaggenau, and Thermador. She then accepted a position as executive chef for SubZero Wolf.

Named 2005 Chef of the Year by the California Restaurant Association, Mark Peel was a second season finalist on Bravo TV’s Top Chef Masters. Mark and Campanile Restaurant have been nominated for numerous James Beard awards, ranging from Outstanding Service to Best Chef.

Named a TOP TEN Student of the Year at the Culinary Institute of America, Jill Davie was presented with the Food and Wine Baby Chef award by Julia Child. After working at LuLu in San Francisco, she secured a position as chef de cuisine at Rockenwagner in Santa Monica. Upon traveling to Germany, she was afforded the opportunity to cook for renowned chef Paul Bocuse. Davie is the star of Food Network’s Ultimate Restaurants and Recipe T.V.

Chef Andre Carthen is the worldwide design ambassador for the kathy ireland brand, appearing with her on Soap Talk and Extra, with additional appearances on Sunday Dinner and Access Hollywood. Andre has worked with the Elizabeth Taylor family in planning her 74th birthday celebration at Beverly Hills Hotel and her 75th Diamond Jubilee at The Ritz-Carlton, Lake Las Vegas. Since completing his culinary degree at Westminster Culinary College in London, Andrew Manion Copley has accumulated more than 20 years of culinary experience in five-star establishments. In 1999, he was appointed executive chef at the Lodge at Koele on the Hawaiian island of Lanai and soon received awards for the No. 1 restaurant in Hawaii (for three consecutive years) and No. 3 resort restaurant in the world. The New York Times and Los Angeles Times have named Copley’s on Palm Canyon in Palm Springs the Hottest Restaurant in Town.

Roy Yamaguchi graduated from the Culinary Institute of America in New York at the age of 19. His first experience as executive chef came in 1979 at Le Serene in Los Angeles. In 1984, he opened his own L.A. restaurant, 385 North. In 1988, he moved to Hawaii and opened Roy’s in Honolulu, named one of Condé Nast Traveler’s Top 50. There are now 31 Roy’s, including 23 in the continental United States, six in Hawaii, one in Japan, and one in Guam. A James Beard Award winner, Roy hosted six seasons of Hawaii Cooks With Roy Yamaguchi on PBS. He also has published three cookbooks.

Andie Hubka received a bachelor’s degree in culinary arts and restaurant management at The Art Institute of Los Angeles. She has worked at the college level as a cooking instructor, restaurant manager, and corporate trainer for a national restaurant chain. She and her husband owned a catering business in the desert for three years before opening Cooking With Class in La Quinta. In 2010, she was ranked No. 2 Best Chef in the Valley in Palm Springs Life ’s Best of the Best reader poll.

Tanya Petrovna’s parents, both of Eastern European descent, were fantastic cooks who made all their meals from scratch, harvesting ingredients from their garden. When Tanya reached college age, she embraced vegetarianism and discovered the art of creating tempeh and seitan.

Though she majored in biology, she could not stop thinking about opening a vegetarian restaurant. In 1994, Tanya founded Native Foods Café, which has grown to seven locations in Southern California. This year, she expects to open locations nationwide. She has been featured on the Food Network and authored two cookbooks. Native Foods has received acclaim in Zagat, USA Today, Veg News, and numerous other publications.

FROM 1980 to 1982, Tony Di Lembo worked at restaurants in New Orleans and Boston, after which he attended the Culinary Institute of America in New York, graduating fourth in his class. From 1983 to 1985, he lived and studied in Italy and France and worked in some of the top-rated restaurants in all of Europe. After moving to Los Angeles, he was hired as personal chef for Barbra Streisand. In 1988, he opened his first restaurant, Indigo, in Los Angeles. He then designed and opened a wholesale bakery called Breadworks, coffeehouses in Santa Monica and Los Angeles, and a restaurant called Tahiti in Los Angeles. In 2003, he co-designed, built, and operated Chippy’s Diner in West Hollywood.

In 2007, Tony co-designed and built The Tropicale Restaurant and Coral Sea Lounge in Palm Springs. He is the author of California Bistro: A Guide to Entertaining. Hector Salvatierra hails from Argentina. He has worked and honed his culinary skills in Europe and Australia and has worked
in many restaurants and resorts around the world. Hector specializes in Italian and Argentinean cuisines. Scott Robertson opened The Ritz-Carlton in Rancho Mirage as sous chef in 1988 and worked at Wyndham Palm Springs as chef de cuisine. He was executive chef at Indian Wells, Chaparral, and Avondale country clubs and executive sous chef for Indian Ridge Country Club. In the early 1990s, he cooked for Presidents Carter, Reagan, and Ford at Mission Inn in Riverside. His experience as executive chef at Eisenhower Medical Center and Heart Hospital of the Desert led him to open New Leaf Catering 10 years ago. New Leaf has earned numerous awards, including gold and silver medals from the American Culinary Federation. Scott has been recognized by the American Culinary Federation with the designation of Certified Executive Chef.
Participating
Wine Professionals

Hugh Davies was born the same year that his parents, Jack and Jamie Davies, purchased the abandoned Schramsberg estate in Calistoga. After growing up among the vineyards, he ventured out to broaden his experiences, earning a master’s degree in enology from the University of California, Davis, and honing his skills at Möet et Chandon in Epernay, France; Petaluma Winery in Australia; and Mumm Napa Valley. He spent years as winemaker and general manager of Schramsberg Vineyards before being named CEO and president in 2005. Hugh, with other advisers, leads the Jack L. Davies Land Preservation Fund, which is committed to preserving the Napa Valley for agriculture and open space. Antonia Quast grew up among the vineyards and orchards of the Okanagan Valley in British Columbia. She holds the highest certificate with the London-based Wine Spirits Educators Trust and is an honorary member of the Italian Sommeliers Guild. During the last 20 years, Antonia has worked as a wine educator, sommelier, restaurateur, wine writer, and sales and marketing director.  As a brand manager, she has represented some of the world’s most prestigious wineries.

Tracy Cervellone is a fine wine consultant, educator, author, and market manager for Wilson Daniels Ltd. In 2003, she earned an Advanced Certificate With Distinction from the Wine & Spirit Education Trust. She became a Society of Wine Educators certified wine educator in 2005 and a Society of Wine Educators certified Spanish wine educator in 2007. Her previous positions included stints as the Southwest region manager for EOS Estate Winery and Hambrecht Wine Group and wine manager at Young’s Market Co. Tracy is the co-author of Paso Robles: An American Terroir.

In 2007, graphic designers Joel Templin and Katie Jain founded Hatch Design. While working with several wine brands, they met Craig MacLean, owner of MacLean Wines. MacLean, who holds a bachelor’s degree in plant science and a master’s degree in enology from the University of California, Davis, previously worked as a winemaker for Markham Vineyards, Cain Vineyard and Winery, and Spring Mountain Vineyard before creating his own brand. In 2008, Templin, Jain, and MacLean created JAQK Cellars and hired as president Bernard La Borie, whose previous experience includes E.&J. Gallo Winery, Piper Sonoma, and Darioush Winery.

www.palmdesertfoodandwine.com/tickets.html
Call (800) 775-7256 for tickets and info