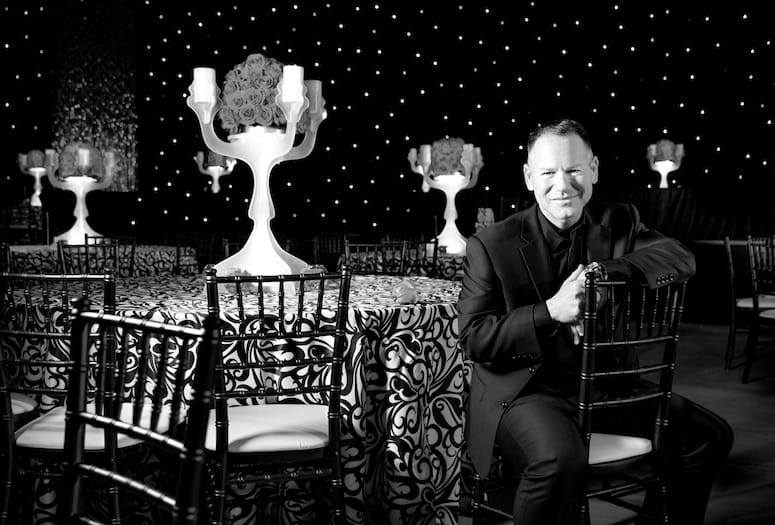 Frank Goldstin and his company, Momentous, has captured a large share of the event-planning market in the Coachella Valley.

Dressed in black, Frank Goldstin arrives at Palm Springs Air Museum about five hours before the 450 guests of Mizell Senior Center’s gala. He wants to ensure the annual fundraiser runs smoothly. This counts as the event planner’s fourth soirée in nine days; the next one happens in a week. At this moment, he zeroes in on the space that, on a typical day, serves as a hangar for World War II and Korea/Vietnam-era combat aircraft.

“I get judged on the décor,” he says amid a room draped in black, studded with silver, and filled with tables sporting candelabra towers of magenta roses. “But what makes an event special is how the experience unfolds.”

Goldstin spent the previous day overseeing the framing and build-out of the space, including the installation of stage and ambiance lighting and the setup of tables and chairs. He left at 1 a.m. and returned eight hours later. Now he’s watching his cast and crew run through rehearsals.

Ironically, Goldstin expected his career would be on the stage. After attending Chicago School for the Performing Arts and Cincinnati College Conservatory of Music, he felt certain about his future as an actor in musical theater. Then he attended a Chicago museum social, where, he recalls, “the DJ was making the party happen.” Intrigued, he struck up a conversation with the DJ, who owned a company supplying disc jockeys for events.

“I learned something from that gent: Always know what’s coming next,” he says. “I learned how events should work.”

Upon being promoted to director of sales for the DJ’s events company, Goldstin began working with party planners. “I was naive, but I had a really good sense,” he says. “So I thought, I am going to start an events business.” He cold-called corporations and asked if they were planning a company Christmas party or picnic. Business grew exponentially.

After Goldstin moved to the Coachella Valley in 2012, a friend invited him to a fundraiser after-party. “I met the most wonderful people,” he says. “They opened doors for me. I love that the community embraces talent and opportunity. You are given a shot, and if you do right by people, success will be yours.”

Within six years of moving here, his company, Momentous, has captured a large share of the event-planning market. From Jan. 28 through March 2, he produced fundraisers for the Muses & Patroness Circle of the McCallum Theatre, Modernism Week, Palm Springs Air Museum, Waring International Piano Competition, Mizell Senior Center, and The Living Desert.

“Being a strategist and creative is the foundation of what I do,” Goldstin says. “When you share that with true, proper advisement and then deliver on the elements and go above that, you elevate the organization’s brand and impact the bottom line in a very positive way.”

Though confident in his talents, he acknowledges his reliance on others.

“I work with the same core team over and over,” he says. “I have amazing partners [for décor, sound, lighting, video, etc.]. I buy talent directly, so I work with agents all over the United States.”

He claims he can juggle so many balls because he knows how to prioritize.

“All my homework has been done, and I just adjust my sails,” he says. “When I have events outside, I pray for no rain or wind. Otherwise, I feel pretty buttoned up.”

Frank Goldstin met his partner, Paul Clowers, “the old-fashioned way: in person” after moving to the Coachella Valley. Clowers is director of development and marketing at Joslyn Center in Palm Desert.

“If I am not doing an event, we are going to an event,” Goldstin says. “We love time with friends, going to the theater, movies, dinner. But we’re also good at staying home and doing nothing … We take really good care of each other.”

As for the fundraisers they attend that are produced by other party planners, Goldstin says, “I can disconnect and experience it like every other person. That’s a really good feeling.”

As much as he maintains a calm demeanor with events he produces as a planner, he’s less assured when he hosts people in his home.