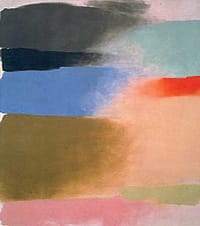 In his 1954 essay “Abstract, Representational, and So Forth,” critic Clement Greenberg asserted that “…what counts first and last in art is quality; all other things are secondary” — a straightforward theory that resonates throughout the exhibition of his collection, which opens Palm Springs Desert Museum’s first season as a full-fledged visual art institution (it dropped natural sciences last spring).

Greenberg, who died in 1994, was the most influential art critic of the second half of the 20th century. When he spoke, “it was as if not merely the future of Art were at stake but the very quality, the very possibility, of civilization in America,” Tom Wolfe wrote in his irreverent art world critique, The Painted Word (Bantam, 1975).

In the book, Wolfe finds Greenberg in German painter Hans Hoffman’s Greenwich Village cénacle, the most influential “fraternit[y] of like-minded souls huddled … around [a] romantic figure,” as Abstract Expressionism was in full boom after World War II and New York replaced Paris as the epicenter of Modernist art. In the cénacle, Greenberg “radiated a sense of absolute authority.”

Indeed, Greenberg framed the discourse for generations of artists and historians, asserting a flatness theory and championing Abstract Expressionism and Color Field Painting. “Every student of contemporary art knows the importance of Clement Greenberg to the development of American art,” says Christine Giles, associate curator at Palm Springs Desert Museum, the exhibition’s only West Coast venue outside Portland Art Museum, which organized it. Other venues include Dayton, Ohio; Syracuse and Katonah, N.Y.; Columbia, S.C.; and Naples, Fla.

“This exhibition is a great way to launch our new mission as an art museum,” Giles says. “Greenberg not only transformed the careers of numerous major artists, including Jackson Pollock and other Abstract Expressionists, but transformed the way we talk about contemporary art today.”

Greenberg has long been credited with discovering and shaping Pollock, but the assertion misrepresents the relationship. In fact, as Wolfe emphasized, “Peggy Guggenheim picked Pollock. He was a nameless down-and-out boho Cubist. She was the niece of Solomon (Guggenheim Museum) Guggenheim and the center of the most chic Uptown art circle in the 1940s.” Rather, Pollock’s success fueled Greenberg’s writings on the prevailing flatness theory.

In addition to his writings, Greenberg frequently visited artists’ studios and shared observations. “His contribution in the studio is scarcely mentioned, but for artists who benefited from his visits this was probably the most significant aspect of what he did,” sculptor Anthony Caro wrote in the exhibition book, Clement Greenberg: A Critic’s Collection (Princeton University Press and Portland Art Museum, 2001), available in the museum store. “He had an extraordinary clarity of eye as well as the highest of standards. In fact, I would say that his eye was the nearest to infallible I have ever come across.”

However, the controversial critic denounced Pop Art — a reaction to Abstract Expressionism, which was a reaction to Impressionism — that was hailed by theorist Leo Steinberg and revived New York’s galleries. Greenberg’s ubiquitous color commentary faded with the rise of Roy Lichtenstein’s comic-strip blowups, Andy Warhol’s Brillo boxes, and Jasper Johns’ American flags — but came back en vogue with Op Art.