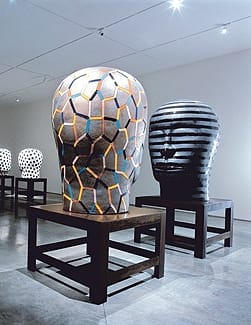 From Palm Desert to Paris, the art of postwar Southern California has enjoyed unprecedented attention in the past two years. Bursting with color and invention, the sleek L.A. style of 50 years ago has been celebrated in Birth of the Cool: California Art, Design, and Culture at Orange County Museum of Art in Newport Beach, SoCal: Southern California Art of the 1960s and 70s from LACMA’s Permanent Collection (through March 30) in Los Angeles, and Los Angeles 1955-1985: The Birth of An Artistic Capital at Centre Pompidou in Paris.

These powerful, important exhibitions have fixed much of the art world’s attention squarely on Southern California, where a generation of artists reaching mid-career appears to be expanding the vocabulary of indigenous California movements, particularly Light and Space, Finish Fetish, and Hard Edge.

Three quintessential Los Angeles artists — Andy Moses, Alexander Couwenberg, and Jimi Gleason — are among the most successful in understanding and pushing the limits of these movements and appear in a dynamic group show opening on Jan. 3 at Modern Masters Fine Art in Palm Desert.

Moses, whose acrylic paintings capture the expansive Pacific Ocean in gestural abstraction, works on horizontal rectangles with concave surfaces, which give the work a sculptural quality that envelops and transfixes the viewer. The many blues hold the changing values of light, which manifest in other colors — some subtle, some sweeping mauves as in so many California sunsets. The viewer is left to contemplate the horizons in the axial symmetry. He owes much to his father, Ed Moses, and Light and Space and Finish Fetish artists such as Peter Alexander for his ability to find his own vision and place in the movement.

Likewise, you can trace Couwenberg’s lineage to Hard Edge painters such as Lorser Feitelson, Helen Lundeberg, Frederick Hammersley, and especially Karl Benjamin, his mentor. His acrylic paintings on polished birch panels have an ultrahip vibe — moving shapes (organic and geometric) that reflect the sensibilities of midcentury modernism; they have an architectural quality that’s playful and richly grounded in the artist’s keen awareness of time, space, and culture.

Gleason infuses his luminous, reductive, and meditative paintings with textures and tones. Forms, often manifesting from nature, emerge and recede as Gleason strikes a balance between space and structure. Viewers’ experiences change as they shift their vantage point.

All three artists came of age in the art world in the 1980s, effectively continuing the exploration of Southern California’s unique schools of expression and immersing themselves firmly in the nucleus of this next generation.

In a word, “scale” distinguishes the ceramic sculptures of Japanese-born artist Jun Kaneko, who opens an exhibition on Jan. 26 at Imago Galleries in Palm Desert. The gigantic heads and monolithic dangos (“closed forms”) push ceramic work — sometimes categorized as craft by unenlightened observers of the medium’s evolution — beyond the bold, abstract direction established by his primary teacher at UC Berkeley, Peter Voulkos, a founder of the West Coast Clay Movement.

Transcending the painterly lines and dots that mark his sculptures — some measuring up to eight feet and topping 1,000 pounds, Kaneko considers each piece as a three-dimensional painting and proves that patience is, indeed, a virtue. After grueling construction, his sculptures require several months to dry and at least a month to fire in a massive kiln. It’s been said that only 20 to 30 percent of the pieces he constructs survive his unprecedented process.
The result comes in the form of the ultimate conversation pieces — a blend of East-West philosophy, as well as technical and intellectual stimulation. In addition to countless exhibitions over 40 years, his work appears in as many museums’ permanent collections, and he has executed nearly 30 public art commissions worldwide.

In an ongoing effort to give back to the U.S. art community that allowed him to blossom, Kaneko has also taught at some of the nation’s leading art schools, including Scripps College, Cranbrook Academy of Art, and Rhode Island School of Design.

The role of the artist in times of war, historian Howard Zinn wrote, “is to transcend conventional wisdom, to transcend the word of the establishment, to transcend the orthodoxy, to go beyond and escape what is handed down by the government or what is said in the media.”

This never crossed Michael Aschenbrenner’s mind as he lay in a San Francisco orthopedic ward for 11 months, recuperating from a second surgery to his knee. A paratrooper with the 101st Airborne Division on a reconnaissance mission in Vietnam, he fell down a mountain and entangled and twisted the knee in some vines. He walked on it for two days before being airlifted to Japan for the first surgery and then to the United States.

Aschenbrenner knows war is hell — and so is making his Damaged Bones, the ongoing series he began seven years after returning from Vietnam. Each intuitive, expressionist limb is bandaged with cheesecloth; surfaced with wax, which he sometimes colors with powder; and splints with “field-expedient” twine and rope.

His process is a metaphor for the work. He stretches and pulls molten glass, expressing himself physically and emotionally and achieving in each piece both strength and texture that elude sculptors who blow and cast glass.

In his show opening Jan. 3 at Edenhurst Gallery, Aschenbrenner includes Damaged Bones and works from three other series: Sighting Devices, Portraits, and Implements. In 2006, the artist’s powerful, 25-piece Damaged Bones appeared in Glass: Material Matters at LACMA. The Metropolitan Museum of Art in New York also has a large-scale installation in its permanent collection.