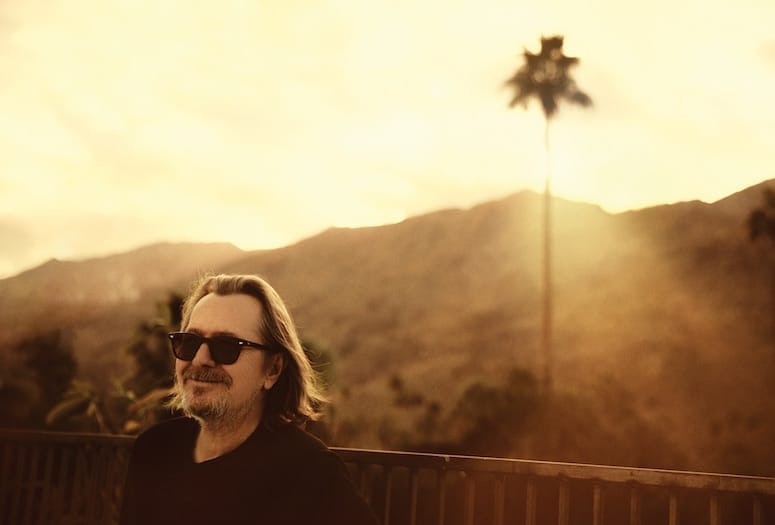 Gary Oldman says he fell for the Coachella Valley during a sojourn decades ago and couldn’t shake the desert sensation.
PHOTOGRAPHS BY AUSTIN HARGRAVE

There’s a secret inside Gary Oldman’s pantry. Past the shelves of vintage cameras in the great room, beyond the black-tiled kitchen walls, an iron ladder hangs from an opening in the ceiling. Up on his soon-to-be-completed roof deck, the Academy Award-winning star of Mank, Darkest Hour, and Tinker Tailor Soldier Spy can see almost all of Palm Springs. And it’s where he can’t stop grinning.

“This is home — for good,” Oldman says a few moments later, after descending back into the kitchen. For a moment, it seems as if he’s referring to solid ground, but after spending a leisurely afternoon at the house he shares with wife, Gisele Schmidt, and their families, it’s clear the home Oldman is talking about is Palm Springs itself. He takes a fresh swig of blood orange juice and affirms, “This is it.”

When he’s not filming elsewhere in the world, Oldman maintains a quiet existence in Palm Springs: enjoying a burger at Tyler’s, riding the Palm Springs Aerial Tramway, tinkering in his photography studio, or relaxing by the pool.

When he accepted the Palm Desert Achievement Award for Darkest Hour at the Palm Springs International Film Festival in 2018, Oldman announced that he and Schmidt, a curator and photographer, were relocating to the desert full time.

“I finally got to the point where I’d just had enough of Los Angeles,” the London-born actor says. “It’s that thing where you run a couple of errands or go to a doctor’s appointment on the other side of town, and that’s your entire day. You spend all your time in the car.

I was so sick of it. I’d been living there for over 30 years, and it was increasingly worse. I love the fact that I can drop off the dry cleaning or go to the supermarket, and everything is five minutes away. I love that about Palm Springs.” 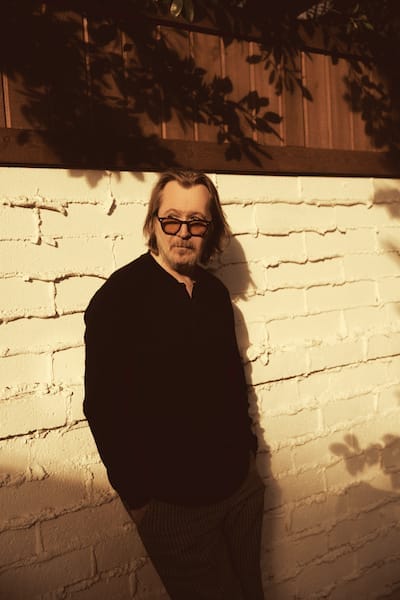 After residing in Los Angeles for more than 30 years,  Oldman and his wife relocated to Palm Springs in 2018. 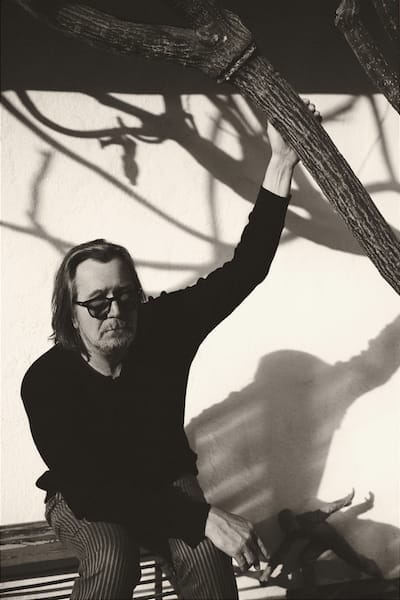 Oldman fell for the Coachella Valley during a sojourn decades ago and couldn’t shake the desert sensation. “The first time I came out here was to go to Two Bunch Palms in the ’90s,” he recalls. “That doesn’t represent Palm Springs as a whole, but I was struck by the big sky, the climate, and palm trees as far as the eye can see. I had dinner in town and thought it was utterly charming. That’s when the thought went through my head: ‘Oh, I could live here.’”

Oldman and Schmidt have been nesting in Palm Springs for the past two years, becoming big fans of the local culinary scene. Their favorite spots include Workshop Kitchen + Bar, Johannes, Birba, and Le Vallauris, which was purchased earlier this year by billionaire Soho House owner Ron Burkle, along with the O’Donnell House, The Willows Historic Palm Springs Inn, and the Colony 29 event space.

Previously, Burkle purchased the iconic Southridge home of Bob and Dolores Hope. (“He’s buying up the whole place, isn’t he?” Oldman jokes.) Mostly, the Oldman clan like to hang out at the property they’ve been lovingly updating, furnishing, and restoring with touches like the aforementioned roof deck, brick planters, and drought-tolerant landscaping.

“Gisele always had the instinct about this place,” says Oldman, who turns 63 this month. “She could see the potential of what the property could be. Once we sold our place in Los Angeles, it was a done deal.

This is where we were living. It just took a couple of months for us to realize we’d made the right decision. As we worked on the house, the more comfortable we became. And even though there’s still work going on, the potential is exciting.”

That work includes adding a structure that will serve as a photography studio. The new space will feature skylights and plenty of storage for Oldman’s images, which are meticulously captured on glass. “That was another one of the advantages of coming here,” he says.

“The light is wonderful. I take pictures with all types of cameras, mainly 35 mil, but my mainstay is 19th century wet plate photography. It loves sunlight and requires a lot of UV. We get plenty of that here. It’s still very much a hobby. I’m not looking to exhibit or make a book or anything. It’s really just for my own enjoyment.” 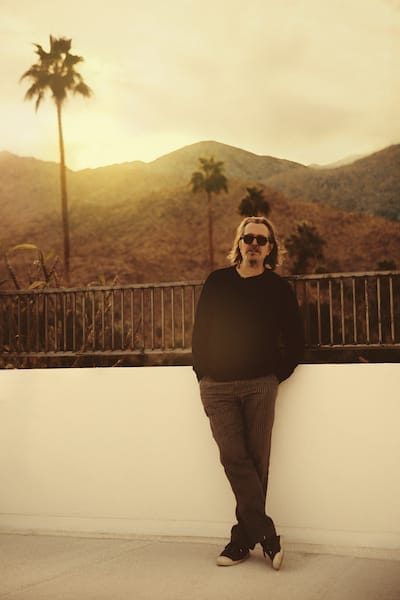 “Everything is five minutes away.
I love that about Palm Springs.” 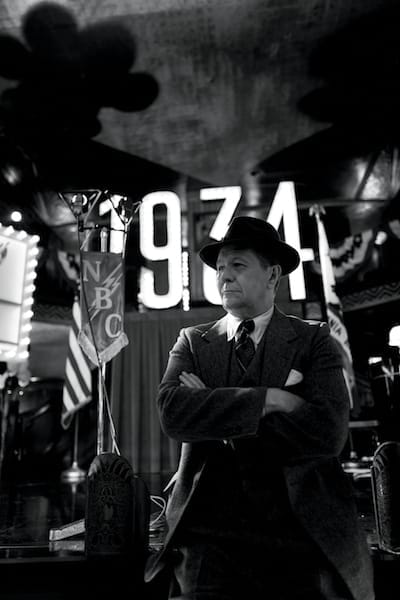 “Sure, I pinch myself when I cross Frank Sinatra Boulevard,” he says in his cheery British accent when asked about joining those celebrity ranks. “It’s a fun reminder of the area’s history. More than that, we love the air. We love waking up to the mountains. We love the quiet. It’s not everybody’s cup of tea. There are people who sometimes give me a funny look when I say I live in Palm Springs. They obviously don’t get it.” 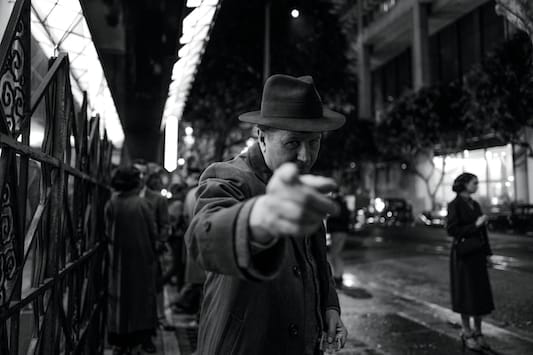 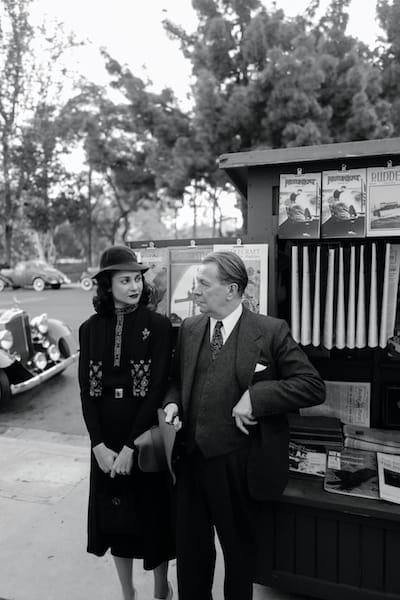 For the third time in his career, the Palm Springs Film Festival is honoring Oldman with an award. This year, it’s the Chairman’s Award for his performance in Mank. (While there’s no in-person event this time because of the pandemic, the festival is continuing its tradition of lauding performances and filmmakers.) Mank, directed by David Fincher and released by Netflix in December 2020, chronicles famed Hollywood screenwriter Herman J. Mankiewicz as he battles alcoholism, the studio system, and William Randolph Hearst while crafting the screenplay for Citizen Kane. As he did with Winston Churchill in Darkest Hour, Lee Harvey Oswald in JFK, Joe Orton in Prick Up Your Ears, and Sid Vicious in Sid and Nancy, Oldman seamlessly personifies Mankiewicz while also bringing his own nuanced flair to the role.

Despite his desire to spend the rest of his life in Palm Springs, Oldman is still hard at work across the globe, and his career is as strong as ever. He’s likely to be nominated for another Oscar this month for Mank. His latest film, the drug thriller Crisis co-starring Armie Hammer and Evangeline Lilly, hit theaters last month and is available digitally and on demand March 5. And he’s in production on — and keeping his hair long for — an adaptation of Mick Herron’s Slow Horses book series for Apple+. It’ll be his first foray into serialized storytelling for a streaming platform.

“There are some roles I’ve had that I’ve always wanted to revisit,” he says. “Certainly, George Smiley in Tinker Tailor Soldier Spy was one of them. At one time, we were talking about doing the follow-up to it, but it never materialized. Slow Horses is alongside those same lines. It was so good, I just couldn’t say no.

"Meanwhile, in addition to finishing construction of his roof deck and photography studio, Oldman has one more only-in-Palm-Springs dream: “I’d love to get my hands on that theater,” he says of downtown’s languishing Plaza Theatre, which opened in 1936 and hosted premieres for such films as Camille, My Fair Lady, and Music Man. “I have this wild dream of running an incredible [theater] company. I’m a little too busy at the moment, but we’ll see what happens.”

• READ NEXT: This Is Us Star Chris Sullivan Returns to His Palm Springs Roots.