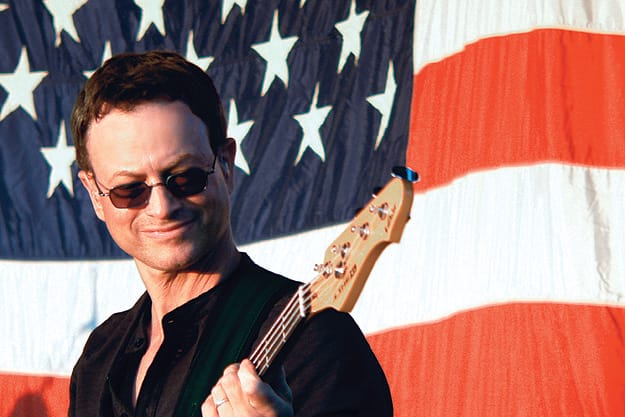 You probably know him best as the star of the hit series “CSI: NY” on CBS or the Vietnam War-scarred, double amputee Lieutenant Dan from the Oscar-winning film “Forrest Gump” (1994). But Gary Sinise shines on stage as well as on the screen. Catch him with the Lt. Dan Band on April 12 when he brings his considerable musical talents to the McCallum Theatre for a one-night foray into rock ’n’ roll honoring those who serve and protect.

In anticipation of his upcoming performance, Desert Guide went one-on-one with the patriotic Sinise in an exclusive online interview.

DG: Tell us about the band and your playlist for this upcoming performance with the Lt. Dan Band?

GS: We play a variety of music, so there’s something for everybody in our set. We play songs from the ’40s and we play contemporary rock. It’s all over the map. It’s a family-oriented show that was really designed to make sure that everybody in the audience had a good time. I’m quite often playing for little kids and World War II veterans at the same time.

DG: When you decided to put this band together with Kimo Williams, were there any other names bandied about or did you know that it would be called the Lt. Dan Band?

GS: Well, Kimo and I and some other musicians in the Chicago area would get together on and off and just kind of jam. When I started doing USO tours right after September 11th, I was shaking a lot of hands and taking a lot of pictures. Everyone was calling me Lieutenant Dan. So when I talked to the USO and they let me take a group of musicians so I could entertain the troops, it just struck me that this was a way to let people know who was coming. At that point, I hadn’t done “CSI: New York” and a lot of people didn’t know my actual name. They just knew my face as Lieutenant Dan.

DG: You’ve been involved with military causes and veterans for a long time. Were you offered the role of Lieutenant Dan or did you seek it out because of what the role represented?

GS: I was certainly drawn to the role when I read it. I had been active with Vietnam veterans groups on and off for 10 or 12 years before I actually played a veteran in “Forrest Gump” and have Vietnam veterans as friends and in my family and my wife’s side of the family. And then “Forrest Gump” came along in 1993 and I wanted to play that character. It’s a very good role, a very good story, and something I felt passionate about. I was lucky that I got the chance to do it.

DG: As for the Lt. Dan Band, how long have you been playing music?

GS: I got my first bass, I think, in seventh grade. I played in little bands in junior high school and then high school. At the end of high school, I started playing bass in a jazz quartet. I was playing bass in a jazz band into my early 20s while at the same time started Steppenwolf Theater company. I was making my living playing bass and acting at the same time, because we weren’t getting paid anything to act when we started the company. Then we got so busy with the theater that I didn’t play music for a long time, until I started jamming with Kimo and some of the guys in Chicago in the late ’90s. I decided I wanted to do it more regularly on USO trips, because I wanted to support our men and women in uniform. I think it’s very important that we do what we can to take care of these military families who are sacrificing so much.

DG: What was your impression of Iraq the first time that you went over there for a USO show?

GS: It was the first entertainment tour to Iraq called Project Salute. There were about 180 people on that tour and I was one of them. I was just going around and shaking hands and taking pictures. I was up in Baghdad a couple of times on that particular trip. It was very hot at that time of the year. It was prior to the insurgency and things were very dangerous at that time. Our troops were occupying a lot of the palaces in Baghdad and still on the hunt for Saddam Hussein and his merry band of bandits. It was a very interesting time. I came home from that trip and two weeks later, I immediately asked the USO to send me somewhere else. Finally I said, “Why don’t you let me take some musicians with me?” So in February of 2004, I did my first band tour.

DG: Have you ever thought about running for political office?

Gary Sinise and the Lt. Dan Band performs April 12 at McCallum Theatre in Palm Desert. The performance benefits College of the Desert Veterans Affairs Program and Palm Desert Public Safety Academy at College of the Desert. For tickets, visit www.mccallumtheatre.com or call 760-340-2787. For information on COD programs visit www.codfoundation.org or call 760-773-2561.