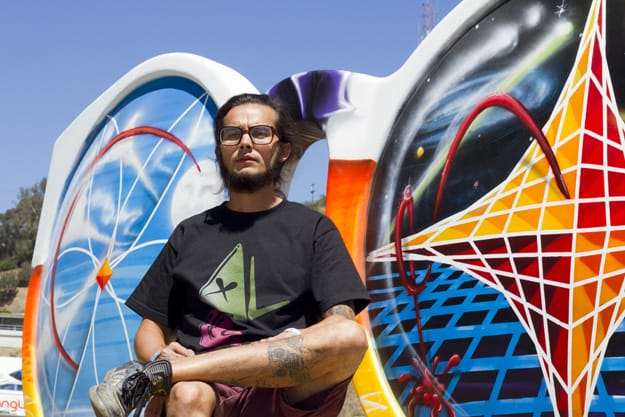 On the last hot day of the summer, thousands of music fans stayed cool by flooding the Los Angeles Historic State Park in downtown for FYF Fest — a music festival that features live performances from some of the most magnetic underground musicians in today’s music scene ranging in musical genres from punk rock to new-age funk.

In its ninth year, what once was a small community punk event back in 2004 has now blossomed into a two-day, five-stage event with 37 bands and 18 comedians vying for attention

Most of the twenty-somethings that sprawled out over the park were music festival veterans and hold a high standard for their $90 ticket.  With multi-faceted competition, like the Coachella Music and Arts Festival, the modern ticket buyer wants to see more, do more and experience more.

For the first time ever, FYF Fest introduced a creative element in 2012 by collaborating with Chili Bean Sunglasses to produce four interactive art installations placed throughout the  grounds, as well hosting a DIY. (do-it-yourself) craft area.

Three of the four art pieces representing the Palm Springs area measured six-and-a-half feet tall, 15 ft .wide and 18 ft. long.  They came in the form of solid foam sunglasses, each with a different mural painted across the lenses.  The back of the sunglasses were covered in special chalk board paint.  Concert-goers used chalk to add to the design.

“We had the opportunity to directly influence the mood and the experience of the festival,” said visual artist Aaron Hansen, 25, of Desert Hot Springs, who helped design the three sunglasses.

The DIY arts and craft tent, named #CraftFYF, offered a plethora of art supplies, encouraging people to press their own buttons, design postcards to mail to loved ones and design any kind of fashion accessory imaginable.

Hansen was chosen as the lead artist for his active involvement in the local desert art community.  His mural creations can be found — not on school walls — all along the Interstate 10, from California to Florida.

His next mural will greet residents and visitors to downtown Palm Springs.

In addition to mural work, fans of his artwork can see and purchase his work at various venues across the Coachella Valley such as the CVAS Art Gallery, Epidemic Skateboard Shop, AOK art shows at Birba, inside Fresh Out the Box.  His work will also be sold at Silica Studios in Palm Springs.

His style seems to be so widely received because of its originality, message and desert influence.

“I live in the desert, so I don’t have everyday city distractions.  I can see as far as the eye can travel and have all the space I need to flourish and develop as an artist.”

The desert influence gave a unique spin to the Los Angeles festival with the crowd appreciating the small-town feel of interactive art in such a big city atmosphere.

For many years, the young art community of the desert sought out influence in Los Angeles, and now, we are starting to see L.A. organizers reach out to the desert artists for their originality.