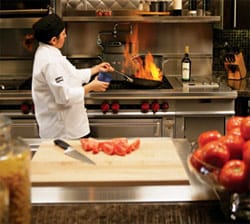 A stainless fridge, a few gas burners, and a stacked oven does not a restaurant kitchen make. It takes blowers and exhaust systems and a fire suppression system, among other major modifications. The depths of this project are reserved only for the truly fearless to explore …

Elizabeth and Rob Johnson knew they had something special when they finished their professional home kitchen, complete with the requisite 3/4-inch gas line and the monstrous air system in place on the roof. They immediately loved the griddle for breakfast, the salamander broiler for melting and browning, and the commercial grill for steaks. Their friends came over to inspect the finished product and, with dropped jaws, could whisper only “Wow.” But the biggest compliment came from their friend, Arlene Luna (right), a sous chef at Bighorn Golf Club’s Canyons Fine Dining restaurant who often comes up to cook for them and their friends. “She said it was the same kitchen she had used during cooking school at Le Cordon Bleu in Chicago,” Elizabeth says.

When the Johnsons completely remodeled their Bighorn home last year, tacking on 50 percent more house to the original structure, adding a commercial kitchen was by far the biggest challenge. The living room’s limestone flooring and fireplace were relatively painless; the soundproof media room with a 150-inch projection screen was a breeze. But the kitchen proved to be a different beast entirely.

The couple’s first smart move was hiring commercial kitchen designer Ken Relethford, vice president of Orness Design Group, who has fashioned many a stylish kitchen in the great restaurants of San Diego, Del Mar, and La Jolla. The bulk of his projects involve professional kitchens and helping owners to get their restaurant businesses off the ground, but he picks up select residential jobs when the client is right. Oddly, Relethford admits that a significant portion of his job entails discouraging potential clients from taking on the task of dropping this kind of elaborate kitchen set-up into their home. “What I hear most often is, ‘I want a commercial kitchen. I really like that Viking range.’ But Viking isn’t commercial,” he says. As it turns out, what most people really want is a highly functional residential kitchen with professional kitchen style. A commercial kitchen is, for the average home cook, too much appliance horsepower — not to mention the additional space requirements, cost of construction, and legwork to bring in all the heavy steel and big flames. It’s something akin to boarding the space shuttle each morning for your 30-minute commute. For the majority of those who fall in love with the idea, it ends up boiling down to culinary overkill.

Most people who’ve done their commercial-kitchen homework and still want to forge ahead know exactly what they’re getting into. They’ve cooked in one before or they have some friends who just installed one. They’re well aware that commercial equipment is built deeper and therefore eats up major square footage. They’ve heard about checking with their insurance company to detect possible issues before they get started. And they’re willing to put up with the equipment that operates louder and can actually be less efficient to use when cooking on a small scale rather than for an ebb and flow of hundreds of eaters each evening. Among commercial kitchen die-hards: career chefs who want a home kitchen that resembles the one they use at work; couples who hire professional chefs to cook in their kitchen while they entertain; and families who use their commercial-grade kitchen as a supplement to a standard one. “Many of my clients have a residential kitchen that they use day to day,” says Relethford. “The commercial kitchen becomes their second butler’s or chef’s kitchen, used mainly for parties and larger get-togethers.” Cookophiles who take the plunge, though, revel in the dramatic results. “It’s a lot more expensive. But if you’re really into it, it’s worth it,” Elizabeth says. “It’s really fun to use. I would do it all over again.”

Those with a keen eye for professional design may notice that even the Johnsons’ gorgeous kitchen cuts some corners by blending a bit of residential equipment in with the commercial stuff — something that could never happen in a restaurant setting. “A commercial fryer holds 40 pounds of fat, for example,” says Relethford. “Obviously, that’s more than what you’d need in a residence. So we are able to downsize to a fryer that still looks like part of the commercial cook line but isn’t.” For this reason among others, even commercial-grade home kitchens are not approved as catering kitchens nor are they automatically licensed by the health department for commercial use. They do, however, pack a visual punch that can send pangs of hunger to any stomach at first sight. Walking into a kitchen like the Johnsons’ gives an immediate sense that something big and wonderful is about to happen, that magnificent dishes plated searing hot could become a legend within these walls. As a bonus, the equipment itself should last 10 to 15 years, says Relethford, because it is made to be operated 10 to 12 hours a day full time  — well beyond the span that even the most social families could ever use it.

Entertaining at the Johnson house happens three to four nights a week. In the front of the house, the courtyard spa and pool with swim-up bar and barbecue center offer a place to escape the heat in the kitchen. Off the kitchen, the bar’s two beer taps coupled with the 2,500-bottle wine room (stocked with French Bordeaux and California cabernets) never even come close to running dry. In the evenings, friends gather around the bar next to the panoramic glass sliders, which open to the back patio with views of the mountains and fairway. A blazing firepit lures guests until they flow back inside to check out the billiard table or refill their glasses.

In this house, though, the main attraction always comes back to the kitchen. Between the Wolf ovens, eight-burner range, griddle, barbecue, deep fryer, two Sub-Zero refrigerators and drawers, espresso station , microwave/convection oven, warming drawers, duo of dishwashers, recycling center, compactor, walk-in pantry, and island seating, there’s no shortage of glamorous goodies to admire. With the cool look of a restaurant and the warm feeling of home, the Johnsons’ kitchen has perfected the essence of a professional yet residential kitchen — doing everything for its owners but pouring the wine and setting the table.