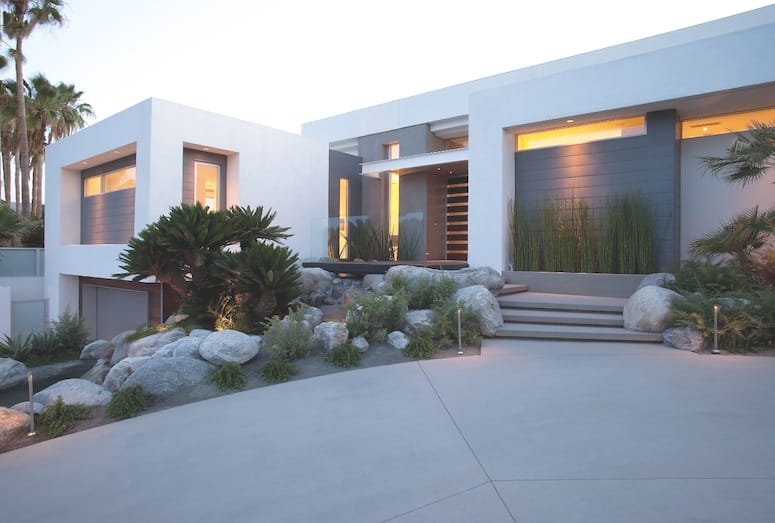 Cardella, a graduate of the Harrington College of Design and principal of Cardella Design in Rancho Mirage, got his start in his native Chicago with the prestigious architecture firm Richmond Manhoff Marsh. Architecture was his passion growing up. “I was lucky to be born in Chicago,” he says, “which has such a great history of important architecture. Early on I was ingrained with Mies van der Rohe, Frank Lloyd Wright, Louis Sullivan, and the ‘look’ they gave to the city.” Sam Cardella designed and added a steel structure directly outside the morning room with concealed motorized sunscreen shades. The 20-foot-by-20-foot open-air space provides a comfortable living area. Another lounging space opposite the structure features an additional motorized stainless-steel curtain as a shield against the strong afternoon suntion here.

At his first job, Cardella’s client was local publisher Hugh M. Hefner. “My first assignment was redoing the interiors of the Playboy mansion in Chicago and then of company’s corporate jet,” Cardella says.

Flying high, for sure. But not quite high enough: Cardella, like Hefner, really wanted to get out of the cold wind of the Second City, which singer Lou Rawls once described as “a giant razor blade blowing down the street.” So, in 1979, Cardella moved to Los Angeles and made his way to the desert 16 years ago, all the while pursuing his career in architectural design. (Basically, an architectural designer practices a hybrid profession, part exterior architect and part interior designer, going on the theory that two great concepts synergize into something even greater.) The custom overscale offset pivot entrance door filters sunlight between the glass and horizontal ipe wood elements. The light streaming through the door creates an architectural light pattern that changes hourly on an adjacent interior wall.

While the job description is unorthodox, it is nothing compared to Cardella’s approach with clients. Metropolitan Home once reported on a little experiment he tried: A potential client was out of love with the colors and general décor in her home, heard about Cardella, and asked for a consultation. Cardella’s plan was to have the client leave her house for a few hours while he and his team rearranged things to show her what they had in mind. They wouldn’t change the colors yet, just the placement of the furniture.

It was risky, but when the owner came home, she raved. “A genius,” is how she describes Cardella. Indeed, the desert has turned out to be fertile territory for his particular brand of design; he’s on speed dial with many of the valley’s high-profile residents and snowbirds. The 15-foot wenge wood top and color core laminate-base dining table was designed by Sam Cardella and fabricated by Stephen Webster. The streamlined modern dining table is offset by a vintage Ico Parisi–designed jacaranda credenza from Adesso Imports. The original Knoll “handkerchief” chairs, designed by Massimo Vignelli, are stackable. The artwork of acrylic and wood is by S. Grossman, titled Mindset (1983). The wall-hung gray lacquer drop-down door cabinet from B&B Italia serves as a dry bar.

One big draw that brought him to the desert was the midcentury architecture treasures here. His love of history, in fact, led him to purchase, in 2010, the family home of Robson Chambers, one of Palm Springs’ earliest and most prolific designers. (He shares credit with Albert Frey and John Porter Clark on the iconic Palm Springs City Hall building, for example.)

Chambers’ home, however, had been neglected and needed attention. “I had to strip away all the unnecessary and unsightly exterior add-ons that were put on the home,” Cardella says, “the electrical conduits, the piping, cable TV wiring. They interrupt the lines of the house,” he says, looking incredulous. “Who does that to such a great building?” With that restoration completed, Cardella turned his eye to restoring something else: the reputation of architect William Pereira. Although it’s hard to swallow that the architect of the Transamerica building in San Francisco is “ignored,” Cardella is on a crusade to make sure that Pereira is included in any list of Desert Modern architects. Cardella was determined to spotlight Pereira’s work on the Firestone estate at Thunderbird Country Club. But first he had to find a buyer.

“I showed it to several clients,” he says. “Most didn’t ‘get’ it, but eventually I found one who really sees it as extremely special and a way to demonstrate Pereira’s significance.” The home shown is another of Cardella’s renovations, also a rescue of sorts. The owner’s plans to move from this site to another were upended suddenly, causing a reconsideration: Should he fix up the old place? In fashioning this “new” 6,300-square-foot residence, Cardella worked with Michael T. McAuliffe, the architect of record for the home, and with Wallace Development as the builder of record. Longtime collaborator Marcello Villano served as the home’s landscape designer and builder of the custom infinity pool and spa.

It is, indeed, a beautiful day in the neighborhood.