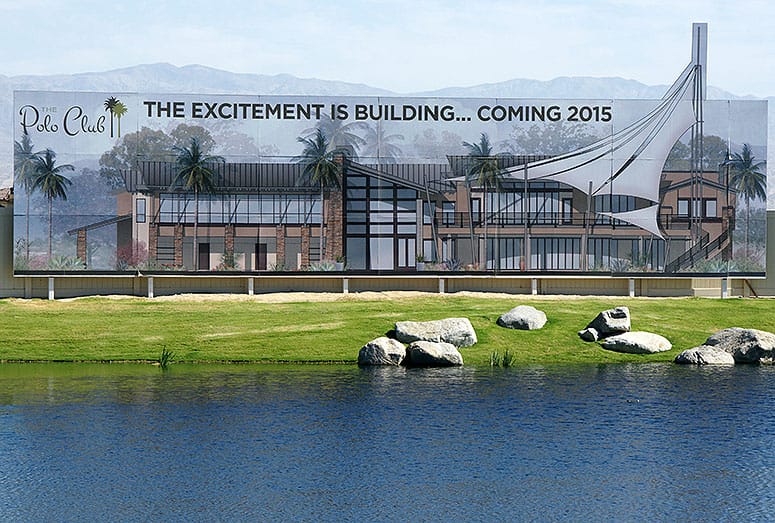 Included in the festivities were speeches from the Indio Mayor and Trilogy General Manager, Ryan Smith. Several city council members were in attendance to mark this momentous occasion. Excitement was contagious to break ground and unveil this club to the community because the design and inspiration pays homage to the history of the Coachella Valley.

Because Palm Springs is known for its mid-century modern architecture, The Polo Club's architecture and interior design invoke a contemporary twist on the defining mid-century style. The club will be designed to give guests views in all directions, and the planned second-story verandas should show vistas of the mountains that will be absolutely incredible. Large sails that will adorn the front of the club take inspiration from the original Empire Polo Grounds.

Trilogy’s new club was inspired by the iconic Southern Pacific Depot Station & Hotel that once defined the social scene of the area. This area was crucial to the Southern Pacific Railroad in the 1870's. In 1876, they developed the Southern Pacific Depot Station and Hotel, which solidified the area as the midway point between Yuma, Arizona and Los Angeles. The hotel was a social hotspot that served as the center of all social life in the area, with overnight accommodates, a well-appointed formal dining room, a saloon, and regular weekend events. Now, more than a century and half later, The Polo Clubwill celebrate that history with the same "center of the action" feeling at The Polo Club.

As an interesting side note, one of the dining venues planned will be called June Hill's Table, which recognizes June Hill Robertson McCarroll, one of the Coachella Valley's renowned founding residents. As her story goes, she was a renaissance woman who was thirsty to learn and improve her surroundings. June Hill famously stumbled upon an idea that would become her most lasting legacy. On a medical call, June Hill was run off the road by a driver from the other direction. This incident birthed the idea of lines to separate traffic on the roadways, which was also implemented by the Department of Transportation throughout the nation's roadways. June Hill was an icon of her time, and she was committed to ensuring all the guests of the Southern Pacific Depot Station & Hotel had an exceptional experience. That's why Trilogy has decided to name a restaurant after her and has paid homage to her contribution to advancements in transportation via the restaurant logo, which will have dashed lines that are a subtle allusion to June Hill's role in improving the area.

Trilogy at The Polo Club is an all-ages community with select 55+ neighborhoods, and has designed amenities that will be just as dynamic as the people who use them. The new club will offer homeowners and guests five innovative culinary venues.