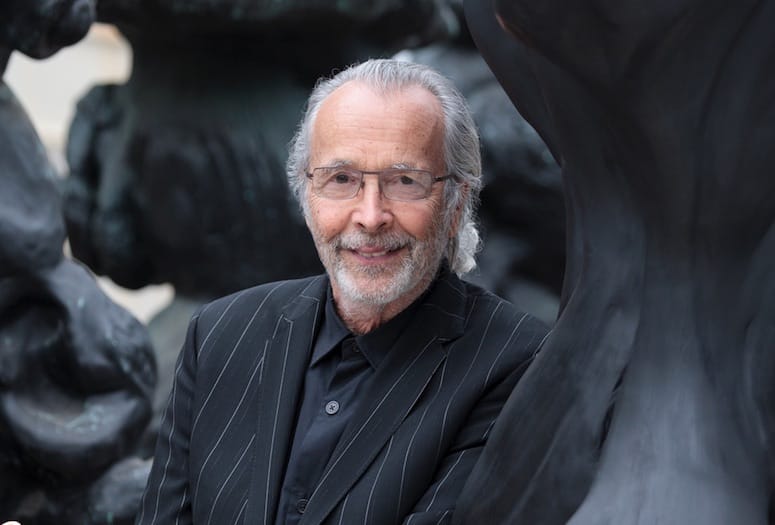 Herb Alpert: A Visual Melody is on display through May 2018 at Heather James Fine Art in Palm Desert.
PHOTOGRAPH BY GERRY WERSH

History tells us that the trumpet is a call to action. Legendary player Herb Alpert is making beautiful music to draw attention to his other creative outlet: fine art.

Herb Alpert: A Visual Melody opens Feb. 17 at Heather James Fine Art in Palm Desert. The show consists of Alpert’s artworks — from mixed-media abstractions to large and small bronze sculptures — which, like his music, leave an indelible imprint on the heart and mind.

This side of Alpert’s artistic palette might not have emerged in quite the way it did had he not picked up the trumpet when he was 8.

“When I finally did make a sound on the trumpet, it was talking for me,” he says. “I was an introvert. I was pretty mute as a kid. The horn was saying things for me that I couldn’t get out of my mouth. It was transferred into the horn in the best possible way.”

Alpert would go on to form Herb Alpert & the Tijuana Brass in 1962, launch five No. 1 hits and nab nine Grammy Awards, the latest from his 2014 album “Steppin’ Out.” He has sold more than 72 million albums. The group even outsold the Beatles two to one at one time.

“I saw things like a black painting with a purple dot, or a green painting with a white dot,” he recalls. “Whatever that was, I thought, ‘Why is that hanging in a museum? Let me try that.’”

He began by “moving paint around the canvas like a monkey.” Like many artists, he experienced a learning curve. Eventually a gallery owner spotted his work and wanted to show it.

“I was surprised by that. I was just trying to do it for my own pleasure,” he says. 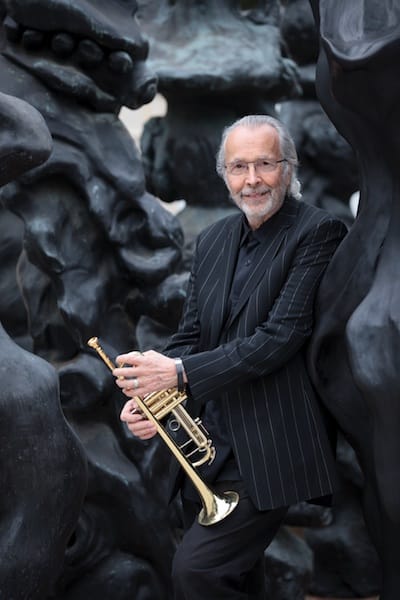 “I saw things like a black painting with a purple dot, or a green painting with a white dot. Whatever that was, I thought, ‘Why is that hanging in a museum? Let me try that.’” 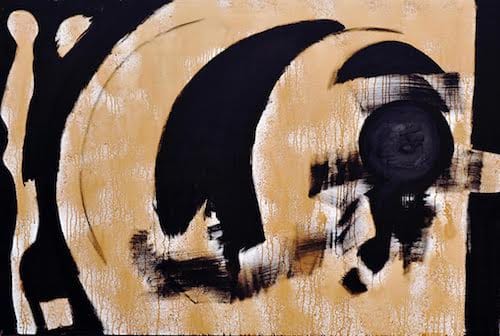 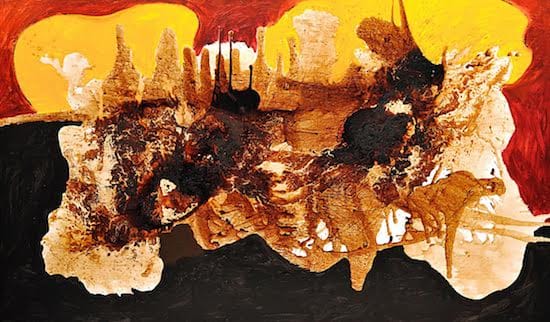 Nearly a half-century later, Alpert’s work is in high demand, shown in galleries around the world. The exhibition at Heather James Fine Art, curated by Chip Tom, stands out. The 2017 work Black Horizon, made with acrylics and coffee on canvas, illuminates large, dramatic brushstrokes. Sculptures on display, particularly the larger pieces in the Black Spirit Totems series — are a wonder. Warrior, from 2011, is 13 feet tall, with a rich obsidian hue and upward flow of energy that suggests a heroic journey.

At nearly 17 feet tall, Arrowhead is a bronze sculpture that evokes reflection. It is arguably among Alpert’s finest works, commanding attention with its prominent arrowhead up top. From base to tip, the work’s fluidity and intensity suggest life passages as traditionally depicted on totem poles.

“Long ago, I had this experience in Stanley Park in Vancouver,” Alpert explains. “I saw these indigenous poles from indigenous people, and I started riffing off of that. Theirs were more symbolic — you could see the animals and the gestures. And then I thought, ‘Why should I do that? They have already done that.’ So, I started doing my version — my jazz version — of a totem pole.”

Other dramatic sculptures followed. “I try to do something that not only has a life but also makes you feel good inside,” he says. “Beyond that, I am in the mystery of art — what is that thing that makes something touch you when you see it. It’s visceral.”

And challenging to put into words.

“It’s a feeling,” Alpert goes on. “You know, I played with Louis Armstrong one night, and I realized that I came as close as I could possibly come to having the answer. Louis’ persona and personality came right through the horn. Louis was playing Louis. That’s rare. I met a lot of great musicians, and that’s not always the case.”

Is one artistic form of expression easier than the other?

“Good question,” Alpert says, with a chuckle. “Music comes naturally to me, because I have been doing it for so long. I am basically a jazz musician, so whatever comes out when I am playing is what comes out. Good or bad. That’s it. I try not to get too intellectual. 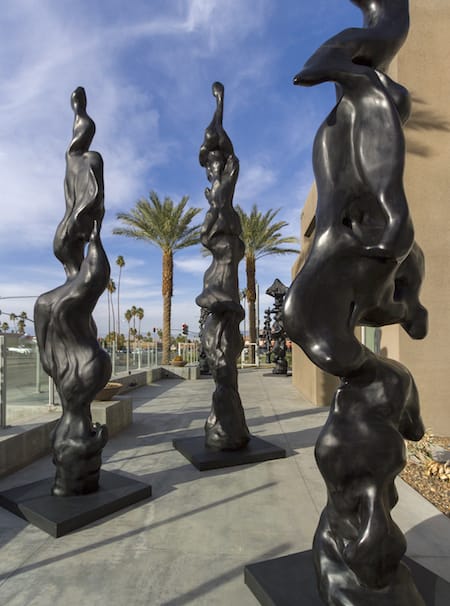 “With painting, sometimes I stand in front of the canvas and feel I have nothing to say, so I don’t force it out. With sculpting, I just don’t feel settled if the piece is not done. I’ve learned not to judge it.”

He says he works on a painting or sculpture until it makes him feel good.

“And then I stop. I do that with music, too. When I am recording, I don’t try to sanitize it or make it perfect. There’s no such thing. I think my art has an honesty. You can feel it.”

“Herb Alpert: A Visual Melody” will be on display Feb. 17 through May 1 at Heather James Fine Art, 45188 Portola Ave., Palm Desert. For more information, visit heatherjames.com.