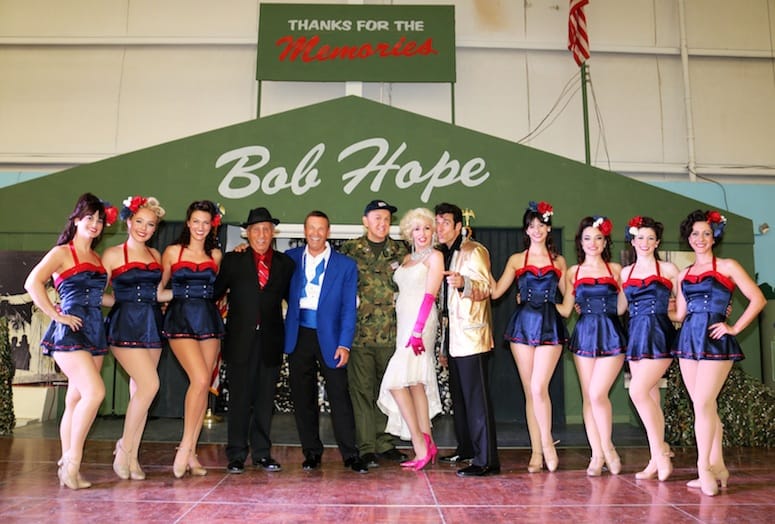 “Thanks for the Memories” is a special holiday performance show set for Dec. 5 at the Palm Springs Air Museum.
Photo courtesy of M2 Event Management

Returning to the Palm Springs Air Museum on Dec. 5, “Thanks for the Memories” will be a special holiday performance that pays homage to Bob Hope’s legendary Christmas shows he performed for the troops during the Vietnam War era.

The 2 p.m. show will recreate the spirit of Hope’s legendary visits to Vietnam when he traveled with a cadre of notable singers, actors, and dancers, to entertain the troops during the holidays. Hope performed his annual Christmas Show from 1964 to 1972 to entertain the troops in South Vietnam, a tradition that he began in 1941 during World War II. Hope’s Vietnam shows were among the first of his annual performances for the troops that were televised for the folks back at home.

“Back in 1941, at March Field, California…I still remember fondly that first soldier audience,” Hope once said. “I looked at them, they laughed at me, and it was love at first sight.”

“Thanks for the Memories” is a one-performance-only matinee show which will feature tribute performers portraying Hope, Frank Sinatra, Jimmy Durante, Marilyn, Elvis, Diana Ross, Tina Turner and Hollywood’s gorgeous pin ups. Santa will also be on deck to ring in some holiday cheer.

For a special treat, the audience will be able to relive a bit of the magic of the Fabulous Palm Springs Follies through the performance of singer Judy Bell and other former Follies cast members. The Follies fans ended its 23-year run in May 2014.

Tickets are $55 each and include a tour of the air museum.