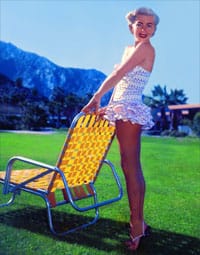 Throughout the years, some of the world’s greatest movie stars have enjoyed sunbathing, splashing, and submerging themselves in the valley’s refreshing pools. Greta Garbo, Clark Gable, Katharine Hepburn, Joan Crawford, Kirk Douglas, William Holden, and Grace Kelly are among those luminaries that undressed and dived into these cooling ponds.

During Hollywood’s golden age, when these silver-screen idols were worshiped like Greek gods and goddesses, carloads of photographers were dispatched to the desert to preserve their likenesses for posterity. Sexy photographs of scantily clad female stars — which proliferated in the 1950s and ’60s — became known as “cheesecake” and its male equivalent, “beefcake.”

“Most of the time, celebrities in Palm Springs are having a good time, so they’re gushing,” recalled veteran glamour photo-grapher George Hurrell, whose camera lens caught the mischievous twinkle in stars’ eyes, a spontaneous grin, or a thoughtful gaze.

One of those historic moments, recorded in color, was an enticing shot of Marilyn Monroe, modeling a two-piece bathing suit. It was snapped by Bruno Bernard at the Racquet Club in 1947, when Monroe was 21 — two years before she met talent agent and club guest Johnny Hyde, who changed her life. Six years later, she posed nude for Playboy and became a Hollywood sex symbol.

Stardom may never have knocked on Monroe’s door had it not been for that early poolside encounter. Her lucky break at the Racquet Club, where so many stars congregated, started a run of eager young hopefuls doing cannonballs in the water to get the attention of producers.

The provocative poses of stars stretching and flexing that followed were destined for magazines such as Life and Saturday Evening Post, along with color supplements distributed free with weekend newspapers in the Midwest and eastern states. The thousands of negatives, prints, and transparencies of stars posing in a range of urbanized settings is a testament to the willingness of each of them to perpetuate their own myths.

At other times, photographers had to protect the stars from themselves.

Blonde, boyish Tab Hunter was dubbed “date bait” by the press for escorting pretty actresses like Natalie Wood. His innocent boy-next-door image was a complete invention, how-ever. The adoring public never knew that Hunter, who began his career as a professional ice skater, was a homosexual. This revelation was a well-kept secret in 1955 when Tab stayed at the Racquet Club. The following year, he and his boyfriend Anthony Perkins shared a hotel room at the Desert Inn.

A prime example of male pulchritude in all its glory was John Payne, the dark-haired, energetic leading man whose cinematic versatility extended from serenading Alice Faye to rescuing Maureen O’Hara and other damsels in distress. A fitness fanatic, Payne lifted barbells and swam each day to stay in shape. Movies took full advantage of his muscular torso, which he showed off at every opportunity — even sporting a man’s bikini decades before it became the fashion.

Cheesecake never tasted sweeter than Lana Turner, who was a total Hollywood concoction. Nicknamed the Sweater Girl because of her busty physique, she had a long history of tempestuous liaisons with the opposite sex. Her suitors included jazz drummer Gene Krupa and actor Victor Mature. At 20, she was married for three months to bandleader Artie Shaw. Turner was 35 when she and fourth husband Lex “Tarzan” Barker rented a Palm Desert house in 1956. She became pregnant with Barker’s child, but suffered a miscarriage. They divorced two years later.

Liberace, whose extravagant piano-playing style resulted in the grandiose tagline Mr. Showmanship, struck an unlikely machismo pose when the flamboyant entertainer was photographed in his swim trunks in the front yard of his first Palm Springs home, located in Deepwell Estates. By the end of 1957, Liberace’s earnings topped $50,000 a week in Las Vegas; eventually, he was paid $1 million for his appearances at Radio City Music Hall.

Buoyant leading lady Esther Williams was crowned the Queen of Swim for her fine aquatic abilities, which she showcased in a colorful pageant of splashy films alongside the likes of Red Skelton, Ricardo Montalban, and Fernando Lamas. Williams and second husband Ben Gage became residents of Thunderbird Country Club in 1955 — the same year this “fish out of water” was photographed by the pool of her new home. Four years later, she dumped Gage and became Mrs. Lamas.

Sid Avery was among the privileged group of syndicated “lens men” who took candid snapshots of Hollywood stars at home. His trusty camera recorded Humphrey Bogart sailing his yacht, Audrey Hepburn riding her bicycle, Steve McQueen driving his Jaguar, and Dean Martin drinking his Smirnoff. While these photographs were often improvised and could be touching or funny, they were sometimes contrived to give reassuring impressions of loving couples, doting spouses, and happy families. Everyday problems, illness, and heartbreak were concealed from the public eye.

Ann Miller, whose expert dancer’s legs earned her the title Miss Tops in Taps, vacationed at different Palm Springs addresses in between dating a succession of wealthy businessmen. In 1961, Miller and her third husband, multimillionaire Arthur Cameron, moved into a palatial six-acre estate in the Las Palmas neighborhood. When their marriage ended 12 months later, she sued Cameron in divorce court for $7 million.

Hugh O’Brian flaunted a hairy chest and a skull-and-crossbones tattoo — a souvenir of his real-life stint as a tough drill instructor in the Marines. They were hallmarks of this actor’s virility, which he demonstrated for six years on television as Western sheriff Wyatt Earp. O’Brian, Aaron Spelling, Lloyd Bridges, and Dennis Weaver were business partners in the Whispering Waters Hotel (now senior living apartments) in Rancho Mirage.

While some stars warbled, others got wet and wild. Bobby-soxer pinups Jeffrey Hunter and Robert Wagner had adolescent girls swooning over their bare-chested heroics when they portrayed brotherly rivals in a handful of popular films aimed at the youth market. Their playful camaraderie followed them to the desert, where the two charmers were besieged by shrieking female fans.

Photojournalist Murray Garrett took pictures of many hard living stars that socialized in Palm Springs, such as Bob Hope, Bing Crosby, and Frank Sinatra. “When Jane Wyman arrived at a nightspot, she lit up a room,” he observed. Tony Curtis and Janet Leigh “were always on the town, hardly ever missing a party or event.”

If a few well-practiced smiles on stars’ faces weren’t always genuine, then the reasons were understood by members of the press that covered publicized airport arrivals, hotel check-ins, and nightclub engagements. Being a star had its perks, as well as its drawbacks.

Wavy-haired child actor Jackie Cooper wasn’t as innocent as he appeared to be in the two films he made with precocious ingénue Bonita Granville. Unbeknownst to her, Jackie drank liquor and smoked marijuana. Granville had just turned 16 and Cooper was 18 when they became teenage lovers. El Mirador Hotel (now Desert Regional Medical Center) was the venue for the couple’s weekend rendezvous. Cooper’s sexual frustration at not being allowed to consummate the affair with his underage girlfriend finally caused them to break-up.

Before Hollywood’s favorite clotheshorse and health advocate Cary Grant purchased a two-story home in the Palm Springs Movie Colony, the dimpled star and his best friend Randolph Scott lived in Santa Monica, where the two swinging bachelors, who were between marriages, shared a beach house for seven years. Photographs of Cary and Randy relaxing by the pool, eating breakfast, and washing the dishes fueled gossip and innuendo about their private lives. Scott later settled in Indian Wells.

Rock Hudson projected wholesome manliness in the half-dozen films he made with Jane Wyman and Doris Day, even though he was intensely shy and privately gay. Hudson’s personal dilemma led him to marry his agent’s devoted secretary, Phyllis Gates — a decision that was arranged to offset damaging stories about his personal life. After they divorced, Hudson was seen in the company of several good-looking young men. One of them was his platonic friend George Nader, who lived in Bermuda Dunes and took him water-skiing at the Salton Sea.

Whenever stars came to the desert for work or pleasure, they converged on the Racquet Club to pay their respects to owner Charlie Farrell, who could usually be found ordering lunch on the patio or imbibing in the club’s Bamboo Lounge. Farrell was no stranger to Hollywood; he was a big silent-film star before moving to the desert. He sponsored many social events at the club, including tennis tournaments where William Powell’s wife, Diana Lewis (who had once been a star herself) grilled bite-sized hamburgers for hungry players, including Lucille Ball, Ginger Rogers, and Dinah Shore.

Genteel screen hunk Robert Stack epitomized Hollywood glamour. This seemingly ageless leading man gave Deanna Durbin her first screen kiss in 1939 and was still making women’s hearts flutter 50 years later as a trenchcoat-wearing host of investigative TV programs. In his prime, he could be found doing somersaults and jackknives off hotel diving boards, which helped him maintain a trim physique.

Buxom Jayne Mansfield was groomed to take over from reigning sex goddess Marilyn Monroe, who had assumed the crown from Betty Grable. Mansfield’s impressive measurements (40-21-35) helped get her noticed at parties and premieres — especially when she conveniently broke a bra strap as photographers scrambled to take her picture. She loved small animals and was often seen holding a pet Chihuahua.

It’s been suggested that being photographed in a bathing suit revealed more about a movie star’s personality than merely the size of his or her chest and waistline; it also bared their soul. Still, many stars who came to the desert for rest and relaxation took their chances at the pools as the wide-eyed press marveled at their every sun-drenched indulgence.

Not all stars were looking for a good time, however. Overworked actors, just like everyday folk, came to Palm Springs for convalescence when needed. Spencer Tracy recuperated in the desert from emphysema; Judy Garland rested up here from the difficult birth of her third child; and producer David Selznick recovered from nervous exhaustion at La Quinta Hotel, where he watched his wife Jennifer Jones in a bathing cap doing the backstroke.

In 1968, Doris Day rented a house at Canyon Country Club, where she was cured of depression following the death of her husband and manager Marty Melcher. “When I first arrived in Palm Springs, I was a vegetable,” Day confessed. “At the end of a month, I was swimming 20 laps and taking long, vigorous walks.”

After Elvis Presley and his 21-year-old bride Priscilla Beaulieu were married in Las Vegas, they honeymooned in Presley’s Palm Springs home. When he needed to replenish his golden tan, Elvis would lay in the sun for several hours at his Chino Canyon house — with an electric fan to keep him cool.

This is the true essence of the desert’s cherished lifestyle:  the freedom to seek whatever cure makes a person feel or look good. It can be spiritual enlightenment or just plain old-fashioned vanity. It doesn’t matter, so long as the end result is perfection.