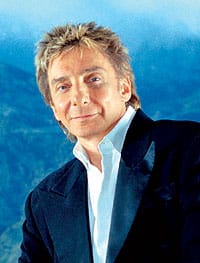 Barry Manilow never wanted to be a performer. He never wanted to tour. And he certainly didn’t want a computer crash. “Aaggh — I turned it on at eight in the morning and it wouldn’t work,” he wails from his home near the Indian Canyons in Palm Springs. He is not, however, unhappy.

“My life is so filled with noise and music and screaming — which I’m grateful for — but I need quiet, and that’s what Palm Springs offers. It’s big, it’s private, it’s beautiful. I’m not here because of the golf, the tennis, any of that — I’m here because of the peace and quiet.”

Manilow fell in love with Palm Springs 13 years ago and kept coming back. The city has been his permanent home for the last eight years.

Though his Vegas show was extended into 2007, Manilow, who created the Manilow Fund for Health and Hope, always finds time for fundraisers, especially when they benefit life at home. On Dec. 1, he’ll perform Home for the Holidays, songs from his two Christmas albums, at McCallum Theater to raise money for the Palm Desert theater’s arts education programs. On May 6, 2006, he’ll appear at Evening Under the Stars, an outdoor concert in Palm Springs benefiting the AIDS Assistance Program. “I’m so grateful to live in such a beautiful place,” he says. “If they need me, I’m always available.

“I’ve had 30 years of packing and living out of hotels rooms with those little bars of soap,” he says. “I did the last tour, ‘One Last Time!’ about a year ago, and that was going to be it. I couldn’t bear being away from home. I’d given away my life to my audiences. Then they called me from Vegas and said, ‘Are you interested in a job?’” Well, yes, he was.

“I get to play with my band, still do the music and interact with the audience,” he says. But for the first time, Manilow does it on his own terms. He flies from Palm Springs on his private plane and lands in Las Vegas within an hour. Sound check, performance, then back home. “I’m back watching the end of Jay Leno every night,” he says, laughing. “It’s a dream gig, the best job I’ve ever had.” Coming from the No. 1 contemporary artist of all time, that’s saying something.

“The audiences are interesting,” he says. “They are not the same fans I have been playing for. They kind of know who I am; they kind of know ‘I Write the Songs’ and ‘Copacabana.’ I’d say a good 70 percent of these 3,000 a night are new. My job is to introduce myself to these people who don’t know why I’m still alive.”

If they don’t know when they walk in, Manilow makes sure they do by the time they walk out. He performs with all the energy of a kid and still looks boyish at 59, which comes from working out every day, “and thank God I’ve still got my hair.”

Born Barry Alan Pincus, Manilow took the maiden name of his mother, Edna Manilow, who brought music into his life. “My mother was a great singer,” he says. “She could have become very popular.”

Instead, she became a mother at 19; two years later, Manilow’s father left. Manilow grew up in Brooklyn, raised by his maternal grandparents while his mother worked. “We were so poor,” he recalls. But the family managed to buy a piano, and even as a boy, Manilow could hardly keep away from it.

At 18, while working in the CBS mailroom, he attended Juilliard, where he played piano. “People listened to me and hired me as their accompanist,” he says. “I was accompanying everyone in New York” — including a fledgling singer in flashy clothes: Bette Midler.

Manilow crafted Midler’s early classics from “Do You Want To Dance?” to “Boogie Woogie Bugle Boy” and would have stayed Midler’s behind-the-scenes genius except for one thing: Her fans loved him.

“I was geeky, unexperienced, but the audiences seemed to take to me,” Manilow says. “I still don’t understand why.” Maybe it was the contrast between the daring diva and her gawky pianist and musical director. Or maybe it was his music.

Arista President Clive Davis approached Manilow about making his own album. “I didn’t want to do it, didn’t want to leave home, and didn’t know anything about performance,” he says. “But they did a big selling job and I thought, well, one album and a couple months on the road. I was wrong. Thank goodness, I was wrong.”

Manilow was the 1970s, starting with “Mandy” in 1974, which sold 4 million singles. He followed with a chain of 25 hits, including “Looks Like We Made It,” “Could It Be Magic,” and the campy but irresistible “Copacabana.” He grabbed an Emmy, a Tony, and Grammies galore.

He insists his success has a lot to do with luck. It also has to do with timing. Back then, “They gave us more of a chance,” he says. “These younger people get one shot, maybe two if they’re lucky.”

They may have the right look, but for Manilow they don’t have the right music. “It really is about the material these one-hit wonders are saddled with. I hear wonderful performances, wonderful-sounding records, but the craft of song-writing has taken a nosedive,” says Manilow, who is thankful for his iPod. “You write, ‘Baby, oh baby, come back to me.’ You have to find a billion ways for saying that.”

The thing is, Manilow did. He laughs. “I wasn’t interested in pop music and found myself the king of pop music.”

It was not a comfortable crown to wear. Manilow was the star critics loved to hate. But his fans more than made up for it. “I have a spectacular fan base,” he says. “They have been very, very supportive over the years, and they have never let me down — ever.”

After two decades of paying his dues, Manilow ventured beyond pop’s confines. “I finally said to Clive Davis, my mentor, ‘I need to do a jazz album.’”

And, boy, did he have a story. Harmony is based on Germany’s Comedian Harmonics, the boy band of the early 1940s. But half the band was Jewish, and the Nazis destroyed everything they had done. Manilow produced the show with lyricist Bruce Sussman and calls his score for Harmony “my proudest achievement. It is, for me, the one I want to go down being remembered for.”

Writing fabulous music is a breeze — for Manilow, anyway. Mounting a Broadway show has been another matter. “It’s the most difficult thing I’ve ever done,” Manilow says of Harmony, which opens this fall. He’s stayed with it out of love for the music — and for musicals.

“I get caught up in them,” he says. “I forget where I am. I lose myself in the story; and if it’s great music, I find myself going for the Kleenex.”

Manilow is no fan of Andrew Lloyd Webber, but hearing greats like Rodgers and Hammerstein rekindles all he loves about Broadway. “You can’t have a better moment than ‘I Have Dreamed’ from The King and I — that’s where it all begins and ends for me.”

In other words, “It’s all about the music. It touches your heart.” Yes, his Vegas act has leggy chorus girls, “and we dance and jump around,” but the music comes first. “‘Mandy’ becomes a deeper experience for me. It’s real. The audiences really get it,” he says.

In addition to his Vegas show and his upcoming performances for charity, Manilow looks forward to the release of a CD of Peggy Lee songs that he arranged for Bette Midler.

In the meantime, there’s a computer to wrestle with; a Vegas show to do; and the short, happy flight home.

“I’d been looking for a home,” Manilow says. “Home is Palm Springs.”