The House of Tomorrow will be open for tours during Modernism Week October, Oct. 13-16.
PHOTOGRAPHY BY DARREN BRADLEY

After a 21-month rehabilitation that the leaves the current owner saying even he doesn’t know how much he spent, the House of Tomorrow opens for tours during Modernism Week October, Oct. 13–16.

“We are excited for the House of Tomorrow to be open,” says Modernism Week CEO Lisa Vossler Smith. “The home plays an important role in Palm Springs history and midcentury modern design and we are eager to share it in its renewed splendor.” 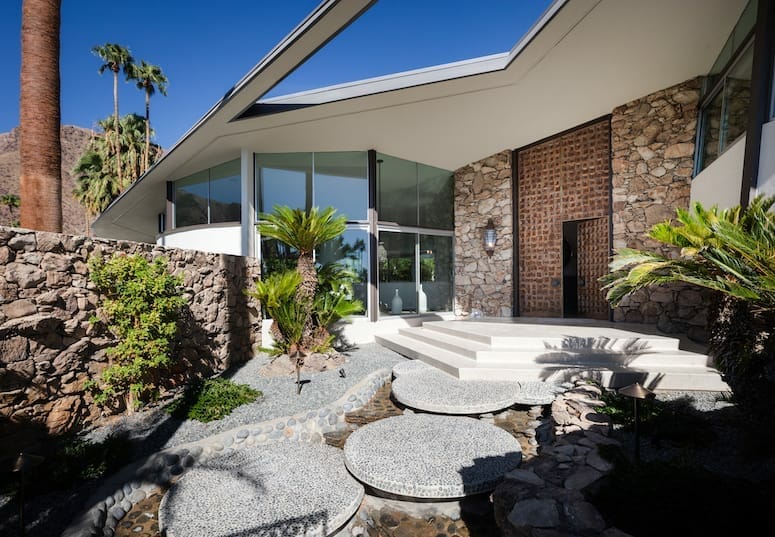 The stone pattern theme plays out at the the entrance and throughout the house.
Before the listing went live, Palm Springs Life toured the makeover with agent Marc Sanders of Compass. From curbside, he led us over a dozen round pebbled-concrete steps measuring 5 feet in diameter, wending and ascending along a purling brook and interrupted by an intermediate landing — a big rectangular slab. The final round step in the House of Tomorrow’s celebration of circles (and every other geometric shape, several repeated to good effect) is even bigger — 7.5 feet, like a moon, with twin submoons phasing on either side. 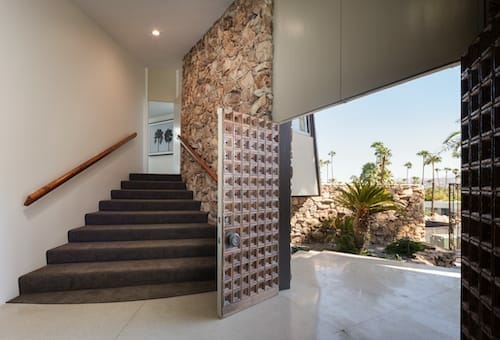 Surviving this pre-ADA trek, we met the big pentagon of the polished terrazzo porch. Encased within the stone wall ahead, twin 6½-foot wooden doors and the panels above them bear more than 350 carved squares, each with its own brass ornament. So far, including the heavy lamp to the left, this is Old World stuff, even though, above the porch, the cantilevered second story makes people say “spaceship” or “stealth bomber.”

Knowing what we know about the House of Tomorrow, it’s easy to imagine that behind these doors, within the first of the four dodecagon living pods where a pony wall separates the formal living from the dining area, newlyweds Elvis and Priscilla Presley lounge on one cushion of the wraparound, 65-foot-long banquette. It’s the most outrageous love seat ever, and there they snuggle while discussing the bestseller Valley of the Dolls. 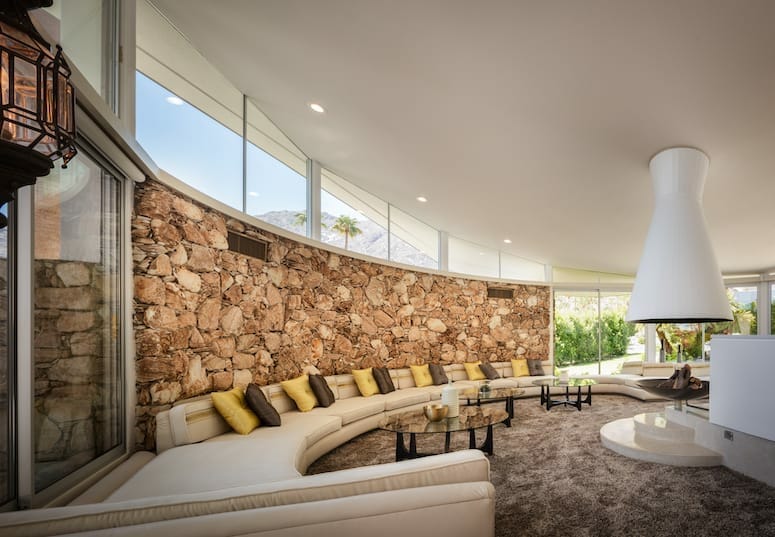 Clerestory windows frame the curved stone wall with a built-in sectional.
Completed in 1960 and featured two years later in Look magazine’s “The Way Out Way of Life” — in which it was dubbed House of Tomorrow — the Ladera Circle masterpiece was leased for a year in 1966 by Colonel Tom Parker. Elvis and Priscilla decompressed here on occasion during that time. More details will come to light in Back to the House of Tomorrow, the documentary film by Simcha Shtull premiering Feb. 20 at the Annenberg Theater. (Tickets go on sale Nov. 1 at modernismweek.com.) As she wound down her career as a couples therapist, Shtull started making this film with a tight-knit team and says, “It’s been a thrill — the funnest thing I ever did in my life.” 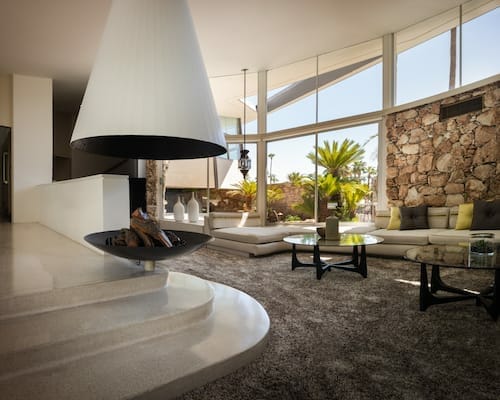 The floating fireplace is especially charming on desert winter nights. 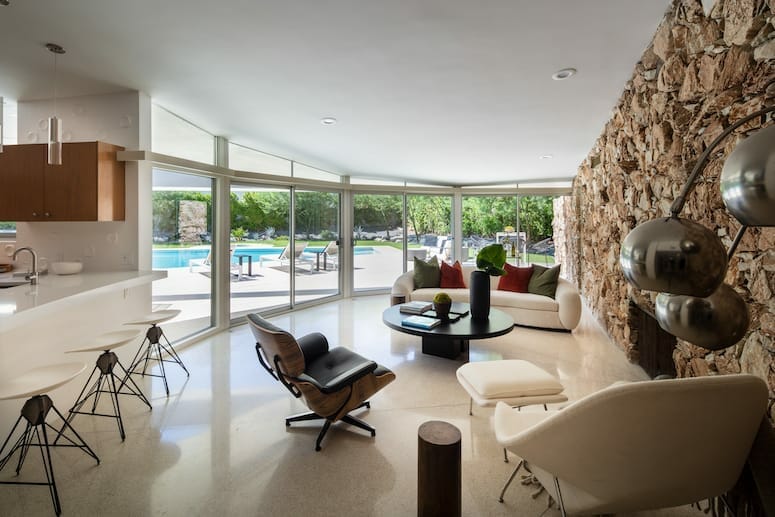 Sliding glass doors bring the outside in and the indoors out, an ideal of midcentury architecture.

Shtull’s husband, Dan Bridge — the one saying he can’t total up the outlay for this project — purchased the house for $2.6 million in December of 2020. Bridge, a retired rabbi, teams on rehabilitation and restoration projects with architect Paul Armitstead, his former brother-in-law. (Bridge was married to Armitstead’s sister.) The pair have experience with several homes in the Seattle area, where they live, and in Palm Springs for the last eight years. “Our goal was to bring it back to a living, breathing thing,” Bridge says.

As for Shtull’s documentary, she offers, “They restored the body; I look at it as restoring the soul. There’s so much more depth, history, and interest than a guy who rented it and stayed a few weeks.”

Before the Elvis hoopla, this was the Alexander family’s home. Robert and Helene Alexander practiced the homebuilding business on mass-mid-mod scale and picked the prime but challenging Vista Las Palmas site for their 4,600-foot dream vessel with four bedrooms and five baths. They handed off to architect William Krisel, their established partner in merchant building. 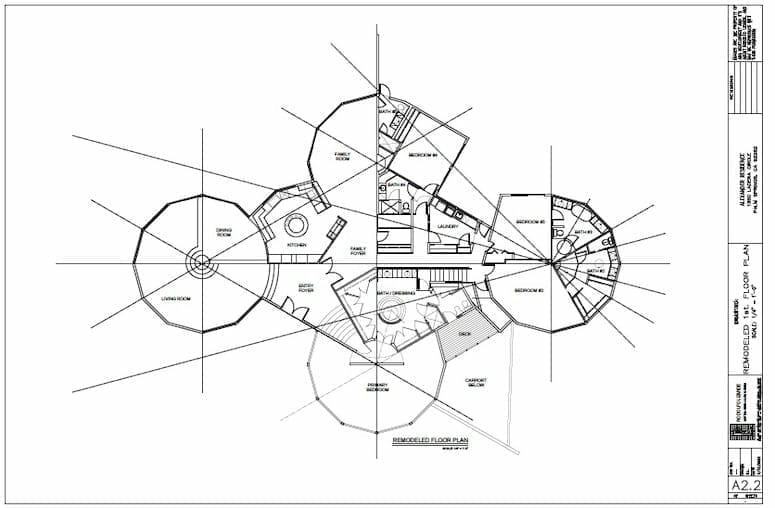 Not to miss the chance for a definitive statement when he sat down to sketch, Krisel puffed his pipe, stroked the Vandyke he wore in those days, and may have recalled futurist illustrations by Arthur Radebaugh as he located the living pods on different elevations. The result was the damnedest accumulation of tri-quad-trap-o-grams to make you wish you hadn’t flunked trigonometry. A built-in benefit, though, is that each trip through the house can be an original experience even without cocktails or hallucinogens.

“It must have given him tremendous pleasure to design it,” says Barbara Lamprecht, the architectural rehabilitation authority from Pasadena who wrote “Krisel Goes Custom,” a chapter in William Krisel’s Palm Springs: The Language of Modernism. Reminding us that Krisel also had certified landscaping chops, Lamprecht reads this “dynamic composition” as Krisel’s love poem to Bob and Helene. Encompassed within is “all the joy of an eros that is unleashed in one way and controlled in another.” To wit: Krisel’s locating the master bedroom on the street is “subversive” — in absolute contrast to the style of giving a hard face to look-a-loos as found at the Kaufmann House and Sinatra’s Twin Palms. 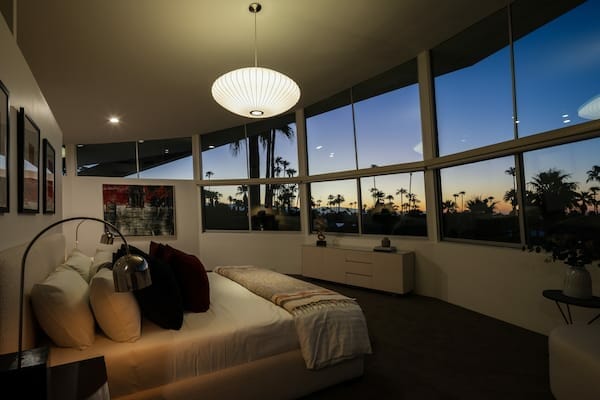 In the master bedroom, window panels follow the curve of the architecture, offering a spectacular view of the desert at sunset.
Good news is that the rehabilitation — Lamprecht favors this word over “renovation” — erases the pink stucco that sneaked in during the Elvis museum and Sleep in Their Bed days. Considering the original drawings, she affirms that the new white is “more contemporary,” nods at the dark brown accents, and says, “By pricking out the vertical columns, you accentuate the rhythm of the dodecagonal.”

Even from first approach of the tourists who come all day long for selfies, the house is, as Marc Sanders says, “architectural eye candy.” Besides the paint scheme — walls are a gleaming if cautious white inside — certain strategic points demand attention. No 1: Site use masters the offset rectangular lot and its semi-elliptical “mouth” that’s taking a modest bite out of the Ladera Circle cul-de-sac. No 2: The property had become overgrown, so a thicket of ficus trees was removed. No. 3: The interior’s crystalline sparkle and the sweeping, incomparable view may be attributed to 69 new double-pane windows, with plenty of challenges presented by the clerestories of varying dimensions.

The wings of the house allow for sly incorporation of a side-entrance carport on the north, or as Krisel labeled it in one drawing, “Car & Boat Under Roof.” Somewhere in the mists of time, garage doors were installed but these came out during the rehab, so there’s open access to the triangular space. The consideration for a boat may reflect the idea that the Salton Sea was supposed to be a big resort, but in retrospect, a pack of three-wheelers from The Lady and the Dale might have been a better fit. 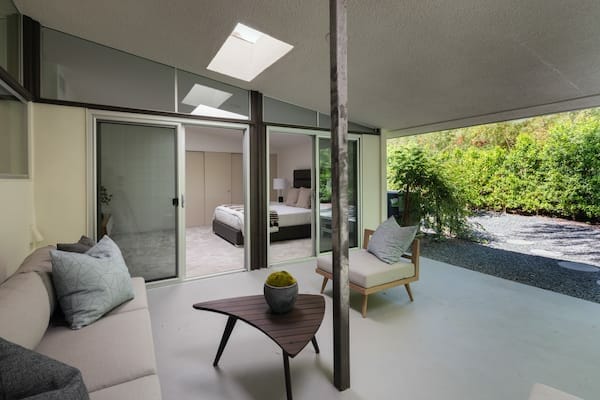 Extending from the opposite point in Krisel’s composition, the majestic pool deck embraces the rugged western slope, and a feeling of boundlessness prevails under the azure sky. Oddly, the poolside tranquility is an after-effect of tumult experienced during the rehab. Six months after Bridge and Armitstead acquired the house, the city of Palm Springs bumped it up from Class 3 to Class 1 historic site, which entailed a stop-work order, a long delay, and the hiring of attorney Rob Bernheimer.

A task already completed by then was the unapproved demolition of the terrazzo pool-deck. Armitstead was frog-marched before the Preservation Board, where he offered to pay for the historic report that would be required as part of the upgrade.

Another messy point was the fifth bedroom that had been added off the westernmost pod, a unit that itself was split in function between family room and maid’s quarters and included a bathroom that was also intended for pool users. Ken Lyon, principal city planner and a Palm Springs historic preservation officer, explained in an email that the extra bedroom had been built without a permit. “It was illegal construction which is why the City requested that it be removed — which also improved the historic integrity of the home.”

Forever sainted in Palm Springs, Bob and Helene Alexander, along with Bob’s parents, two other passengers, and two pilots perished on the stormy evening of Nov. 14, 1965, after their chartered Lear Jet 23 left Palm Springs bound for Burbank but nose-dived into the Indio Hills. Spatial disorientation of the pilot in command was given as the reason, and the most immediate result was an orphaned 11-year-old daughter, Jill, today known as Jill Kitnick of Santa Barbara. 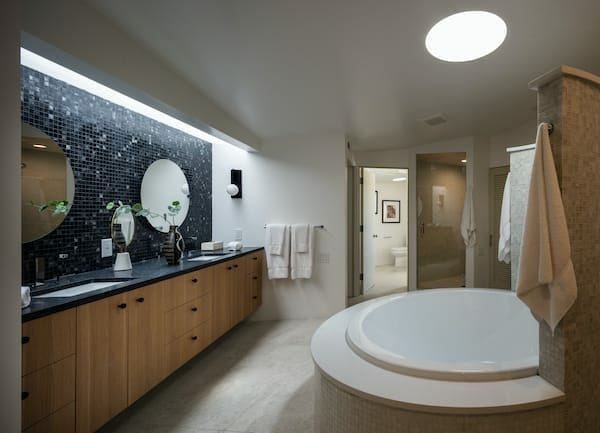 During their travails in the rehabilitation process, Bridge and Armitstead still strove for fidelity to the original modernist spirit and the family feel. “It’s a place where people can come, enjoy the architecture, the yard, and the pool,” Bridge says.

Uncertainties concerning its future use will be resolved soon with a new owner and with changes in progress on Ladera Circle as the new construction to either side of the House of Tomorrow is finished.

Until then the image that stays foremost in mind is Cal Bernstein’s shot for Look, featuring Helene Alexander and Barbara Marx (later Sinatra) negotiating Krisel’s stepping stones on approach to the entrance gate. Their wind-tunnel bouffant coifs are lacquered to perfection. Alexander wears a dotted two-piece swimsuit and two-inch heels, and she carries a beach towel and wicker valise. Marx’s suit is a floral print, and a towel drapes over her left arm as she points at something, as if realizing they forgot to tip the cabbie. All this artifice is somehow perfect for the House of Tomorrow, which any moon base would be wise to emulate.

• READ NEXT: Guide Dogs of the Desert Celebrate 50 Years.