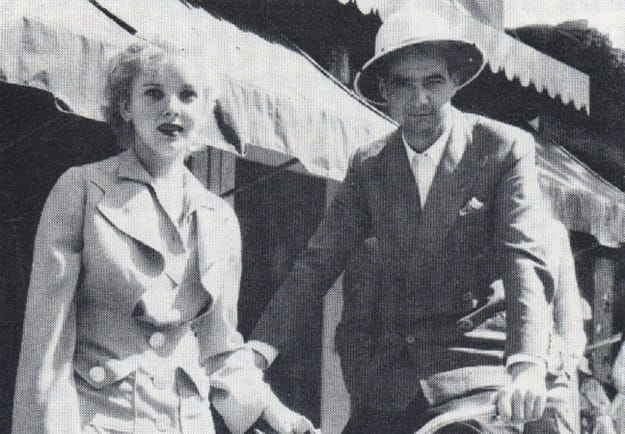 Howard Hughes was a frequent visitor to the Palm Springs area for more than 30 years beginning around 1925. He stayed in a leased house or suites at the Racquet Club or Ingleside Inn, usually in the company of a young Hollywood starlet.

"One time he rented a house and painted all the windows black," recalls Noah Dietrich. "He didn't play golf in Palm Springs, but he made plays for a lot of actresses and he went out on the town a lot."

Ida Lupino, Ava Gardner and Elizabeth Taylor were among the actresses the billionaire squired in the desert. Hughes frequently flew one of his own planes to the resort. In the late 1920s he began a routine of early morning flights from Los Angeles over the high desert east of the San Gabriel Mountains to Palm Springs, then west to the coast and back to Los Angeles.

One of Hughes' last flights to Palm Springs occurred in 1956 when his passenger was Florida Gov. LeRoy Collins, with whom the industrialist was discussing plans to build a medical institute.

The trip was typical of many Hughes made to negotiate business deals away from his offices and staff in Los Angeles.

His 1948 purchase of RKO followed four months of secret talks with studio owner Floyd Odium at Odium's ranch near Indio. Hughes and Odium's wife, the late aviatrix Jacqueline Cochran, had been friendly rivals for air speed records in the 1930s.

Hughes sometimes came to Palm Springs under an assumed name, hiding out in hotel rooms while his business associates and the public remained in the dark about his whereabouts. He was so adept at dropping out of sight, a late summer 1944 clandestine trip to Palm Springs was not discovered by Noah Dietrich or other close associates until after Hughes' death.

In 1976 a Hughes Aircraft mechanic disclosed that he and the boss had spent several months flying between Palm Springs, Las Vegas and Reno, using phony names at hotels and doing no work.

Hughes' many visits to the Ingleside Inn were recorded on file cards by, then-owner Ruth Hardy. A card dated Oct. 12, 1946, noted Hughes had checked into Room 301 under the name Earl Martyn and Ava Gardner had checked into Room 102 as Mrs. Clark. Hughes paid $40 cash per night for both rooms.

Howard Hughes wrote at least six wills between 1925 and 1950, but signed only the versions composed in 1925, 1928 and 1938, according to court records and recollections of his associates.

Unsigned wills were prepared in 1944 and 1950. Noah Dietrich remembers, "I was with Howard when he made out his will in 1950 at the office in Los Angeles. I helped him draw up that will and I advised him to handwrite it so it couldn't be forged."

Dietrich was named executor of the Hughes' estate in the 1928 and 1938 signed wills and in the 1944 and 1950 unsigned wills, creating fears among Hughes' executives in 1975 — the year before the billionaire's death — that Dietrich would end up administering the empire.

John Holmes, a senior aide to Hughes, acknowledged the fear in a September 1975 memo to his boss: "Even Raymond Holliday (Hughes Tool Co. executive vice-president) said that if you had a will it would have been so old that Noah Dietrich would have been probably the administrator and chief beneficiary."

The last will signed by Hughes was mailed to First National Bank of Houston on March 3, 1938, and placed in a safe deposit box; after his death, the bank said it could find no trace of the document. Hughes left small pensions to three servants, the rest of his estate to establish the Howard R. Hughes Medical Research Laboratories in Houston; Dietrich was named the executor.

After Hughes' death, his relatives and executives of Summa Corp. launched an international search for the billionaire's missing will. The Racquet Club in Palm Springs was among the places searched.

Dietrich's attorney, Hal Rhoden, remains convinced that the 1968 "Mormon" will which a Las Vegas jury found to be not written by Hughes "is the only valid will Howard Hughes left."

"There was no appeal of the Las Vegas verdict," the attorney explained, "because there was no reversible error and no money to pursue an appeal — it would have taken hundreds of thousands of dollars."

The two witnesses Rhoden believes he needed to persuade jurors Hughes had written the 1968 will were never found, but the attorney vows, "If they ever are located, I would find a way to get the will probated, even if it meant making a new law."