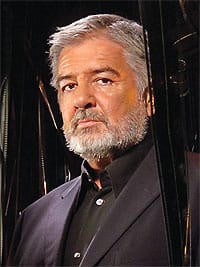 “I am a died-in-the-wool film festival fanatic,” he says. “Film has the power to affect the way people view the world, the way they think about situations that may be outside the realm of their day-to-day lives.

“I’m not talking about Hollywood blockbusters,” he continues. “I am talking about films that strike on an intellectual level, not just a visceral level. That is what film festivals exist to promote.”

The Vancouver native intended to become a lawyer to get involved in politics. But an elective college course in film changed his focus. “Cinema of the late 1960s and 1970s was more politically engaged,” Macdonald says. “They were heady times for anybody my age.”

Instead of going from college to pre-law, he moved to Seattle when a friend — with whom he had sneaked out of class in seventh grade to go to the movies — and discovered a rundown 1,600-seat vaudeville palace. After living in the changing rooms while refurbishing the 1907-built theater, they opened at Christmastime in 1975. Meanwhile, they had talked about launching a film festival, which they did in May 1976. “And I never looked back,” Macdonald says.

He subsequently helped launch the Vancouver film festival, then gave up both the Palm Springs and Vancouver festivals to help launch a festival in the Hamptons in 1994. After the 1996 Long Island, N.Y., festival, he returned to Seattle full time. “I wanted [the Seattle festival] to become a year-round organization,” Macdonald says. He started a membership, programmed semi-monthly events and mini-festivals, and began planning a building to include a research library, lecture space, and gallery for film-related exhibitions.

As his 30th anniversary with the Seattle Film Festival neared, Macdonald took a call from Harold Matzner, immediate past chairman and treasurer of the Palm Springs festival. Over the past three years, Matzner had been calling him for input and advice. But this time he offered Macdonald a job as executive director. Macdonald had received plenty of film festival offers, from as far away as the Cayman Islands and Dubai, but he recalled his experience during the first four years of the Palm Springs event and considered its potential.

“I believe it can be one of the most important film festivals in the world,” he says. “I realized I can do Seattle in my sleep and that I needed a new challenge.” That includes making Palm Springs International Film Festival a year-round organization.

One thing Macdonald can’t do is name a favorite film. “For me, there is no one great film. There are a large number of great films, and that’s what keeps me going.” He still finds it electrifying “to sit in the dark with a film and have my skull ripped off.”