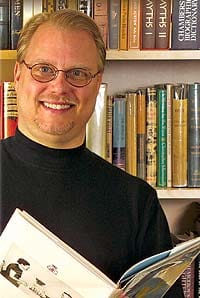 By day, Mark Gaulding is director of revenue control and audit at Eisenhower Medical Center. In the evening, he devotes time to books, magazines, letters, and photographs by, about, or owned by the Duke and Duchess of Windsor. In 1986, he began frequenting booksellers with antiquarian and out-of-print stock. Along the way, he discovered others share in this royal obsession. A Duke & Duchess of Windsor Society boasts members in the Netherlands, Canada, and France, as well as England, and they scour ebay for gems to enhance their collections.

“[Ebay] really expanded my collection in ways I never really thought about,” says the Palm Desert resident. He paid a paltry $65 for a book from the Duke’s library that had hidden within its pages a note in the Duke’s handwriting indicating the book’s other two volumes were in his house in France.

Among Gaulding’s collection of 350 books (of which he has read about 75 percent, some multiple times), Gaulding has the Duke’s signed, limited-edition autobiography, for which he paid $800. He also has a signed copy of the Duchess’ autobiography, an obscure book of sermons for the Duke’s coronation (which never happened because he abdicated the throne for Wallis Simpson), and a 1937 first-edition poetic drama made into a movie narrated by Orson Welles. Some books come from the Windsors’ own library, including Conrad Hilton’s biography and Noel Coward’s autobio-graphy, both signed to the Windsors.

Gaulding likens the Duchess’ handwriting to hieroglyphics and says he and other society members exchange letters trying to interpret them.

Four years ago, Gaulding joined other society members on a visit to France, armed with a map to the only house the Windsors ever purchased. He calls a photograph of himself in front of the former tile mill one of his most prized possessions and says the caretaker gave them a personal tour of the house and grounds, where the couple buried some of their many dogs.

Possibly the most valuable possession in Gaulding’s collection is an interview — with film rights — of the Duchess in her Waldorf apartment, for which he paid $2,500.

“I hope to offer it to A&E [cable network] as a newfound profile on the Windsors,” he says, adding that he first needs to protect the copyright in new media formats.

Now serving as editor of the society’s quarterly newsletter (a bound 20-plus-page review of all things Windsor), Gaulding concedes his consumption in the couple’s history is strange. “But in a wonderful way,” he says. “I found a subject matter [that] allowed me to pursue my passion for books.” Discovering ebay and the society has only fueled the flame.

“Now that I have the newsletter, it is important for me to get as many documents as possible.”