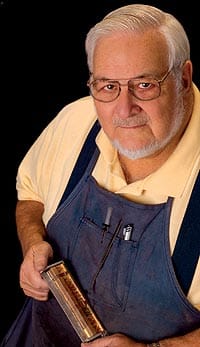 Trogman began as an apprentice compositor in 1942, working with metal typesetting, which was supplanted by photographic typesetting. He created a system of setting display type on film and starting making his own fonts. He went to Germany after a 10-day Berlitz crash course and negotiated the exportation of typefaces from his home in the City of Industry. His company, Foto Star International (which also had a branch in Australia), created 5,000 fonts.

“This is all very great, except the Macintosh came along and within one week I was out of business,” he says. “The people who supplied film for my system decided to stop making it because there was no mass market anymore.” Ironically, the invention that ended typesetting enjoys U.S. copyright protection of its font-creating software, whereas Trogman’s fonts were only protected in Europe.

“Congress said the alphabet is like the wheel. I doesn’t belong to any particular person,” he notes. When his wife suggested he retire, Trogman agreed with one stipulation: “I wanted to play with type and do letterpress printing as a hobby.”

Moving to Palm Springs and reducing his inventory by a third (35 tons), Trogman set up a small shop off Cherokee Way south of Highway 111. There he listens to classical music while puttering and printing for his church, the Elks Lodge, and senior citizens.  He also enjoys showing children how printing used to be done.

And Trogman knows his history. For example, he explains that the Vatican had the patent on italics for 300 years and that, contrary to popular belief, Gutenberg did not invent the printing press (he used a wine press), but rather invented movable type.

Trogman was 6 when he received a toy printing press that used rubber. At 8, his uncle took him to a print shop and, when he heard the click of metal, he was hooked. While attending the University of Santa Barbara, he worked at the Santa Barbara News Press as a Linotype operator. He later taught printing and graphic arts and led seminars worldwide.

In his shop sits a Heidelberg press; a C&P hand press; a Linotype; a 1936 Ludlow typograph (for making headlines); a 110-year-old Oswego guillotine that can slice through a ream of paper; cabinet upon cabinet of metal lettering and ornaments (borders, brackets, percent signs, designs of turkeys, etc.); and a library of font catalogs, maintenance manuals, and other typography books.

Trogman proclaims the machinery worthless. “It’s valuable just to those who love them,” he says, pointing to himself. “All this stuff became salvage because it took up so many square feet.” He points out that he couldn’t even get money for the Linotype on eBay. “It doesn’t mail that easy,” he says of the two-ton machine with 9,000 parts. Besides, he adds, “Very few people know how to service it.” Of course, he can, having enrolled in a Linotype maintenance class at the age of 14.

Harboring no ill will toward the Mac (he does graphic design on four of them at home), Trogman holds a place in his heart for the old printing work-horses.  He likes the “tactile quality” and “the challenge of being able to design within the mechanical limitations of the equipment.”