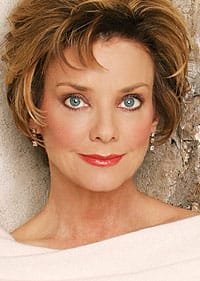 Judith Chapman is used to the flicker of recognition in people’s eyes when she meets them at St. James at The Vineyard, her restaurant in downtown Palm Springs. As she plays hostess with the mostest, patrons often recognize her as Ginny Blake Webber (General Hospital), Angelica Deveraux (Days of Our Lives), or from her roles in The Sweetest Thing and 28 Days.

“I can see their eyes are downcast and they’re thinking, ‘Oh, my god, she used to be somebody and now she’s hostessing at a restaurant in the desert,’” she says, laughing heartily. “I tell them, ‘Don’t worry, darling, my boyfriend’s the owner.’”

Chapman recently outperformed a bevy of soap opera and known actresses — including Connie Selleca, Michelle Phillips, Mariette Hartley, and Donna Mills — for the coveted and juicy role of Gloria Fisher Abbott, a gold digger who marries a cosmetics tycoon on The Young and the Restless. She took over the role in January after sassy and brassy Joan Van Ark left the series. Chapman’s Gloria was more subtle and sensual, and Y&R producers loved the interpretation so much that they signed her to a three-year contract.

“So many soap operas are getting into outlandish storylines and away from what makes soap operas: sex, marriage, divorce, infidelity, all these romantic trysts and triangles. The Young and the Restless has stayed true to that,” she says.

In 1988, a tired Chapman began leaving Hollywood on weekends for the calm of the Coachella Valley. She made the move permanent 12 years ago and began streamlining her life.

She taught acting and yoga at College of the Desert, began directing and acting in local theater, and mounted a one-woman play, The Belle of Amherst, based on the life of Emily Dickinson. She performed the play around the country.

Now, she works on Y&R Monday through Friday and returns   to the desert to spend weekends with her life partner, James Offord, and teach yoga at Urban Yoga in Palm Springs. “I have been fortunate to have my L.A. life and to continue and maintain my Palm Springs life,” she says.

Recently, Chapman sat at St. James’ bar, decorated mostly with Asian artifacts she bought while traveling. She relaxes with a glass of white wine (after teaching her Saturday ashtanga yoga class), and her blue eyes light up as she talks of Sri Lanka’s elephants and Thailand’s natural zoos. In fact, she’s working on a book based on her extensive travel journals.

Chapman, a Buddhist, has little in common with her character, Gloria, who is fond of leather, leopard prints, and cash. To be sure, she drives a Toyota hybrid, believes in alternative fuels, and worries about development encroaching on desert wildlife.

She considers herself fortunate to be on a top-rated television program at an age when many actresses find roles scarce. “That’s what I like about Gloria,” she says. “Just because we hit a certain age, it doesn’t mean we can’t be dynamic, sexy, smart, and take care of ourselves.”