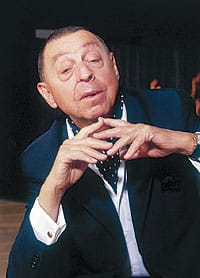 Time is valuable, even in retirement, and the debonair James Galanos needs a master printer fast. He’s onto something — textures. He loves them: rippling water in Macedonia in Northern Greece, the reflection of a Henry Moore sculpture in the pool at Lincoln Center, the fresco wall in Florence with a gold bicycle in the foreground.

Galanos — America’s pre-eminent couturier whose most famous client was Nancy Reagan — has made a hobby of his lifelong interest in photography. Today, the part-time Palm Springs resident looks not for good pictures but for artful images. “I’m not a photojournalist,” he says, pulling a print of a water scene closer to him. Looking at the sparkling water, he intones, “I like textures — the water rushing in.”

And he has only begun to comprehend the possibilities of printmaking. “I have no technical expertise whatsoever,” he says matter-of-factly and noting he shoots with a Nikon 100. “I’m still learning what a negative can do.”

Seemingly oblivious to the valet parking for so many A-list socials across the street at Jim and Jackie Lee Houston’s home in the Vista Las Palmas neighborhood, Galanos, 79, prefers the solitude of his own midcentury modern digs — wide open and tastefully appointed with fine art and well-spaced furnishings that bespeak his understated opulence.

In fact, Galanos might be the quietest neighbor on the block. In his 47 years in the fashion business, he has attended enough parties, dressed enough celebrities, models, and socialites (Marilyn Monroe, Jackie Onasis, Elizabeth Taylor, Barbra Streisand, Diana Ross, Judy Garland, Rosalind Russell, Betsy Pickering Kaiser, and others), and given enough of himself. Now, as Mrs. Reagan would say, it’s his turn. And, encouraged by friend and legendary Hollywood lensman Michael Childers, he’s taking it in pictures.

I picked it up when I retired,” he says. “I don’t golf, I don’t play tennis, and I’m not particularly interested in being involved in society. I’m sort of a loner.”Galanos, who spends a couple days each week at his Los Angeles home, has no studio. But, Childers says, “He has an eye and that’s what’s important.” Indeed, his vision traces to his fashion career. Raised in New Jersey, Galanos attended New York’s Traphagen School of Fashion, worked for Hattie Carnegie, and designed costumes at Columbia Pictures before traveling to Paris in 1947 to train under couturier Robert Piguet. Shortly after returning to New York, he left his position at Davidow and moved to Los Angeles. In 1951 the Jean Louis protégé launched Galanos Originals, which became known for his exquisite workmanship in fine details, such as silk dress linings and intricate hand-done embroidery, and his couture vision, which included imaginative use of chiffon.

Galanos’ New York runway appearances earned him the Neiman Marcus Award and his first Coty Award — the Holy Grail for fashion designers (and he repeated in 1959, the year the Coty Hall of Fame inducted Galanos).

A recipient of the Council of Fashion Designers American Lifetime Achievement Award, Galanos retired in 1998. “I’m an old-timer now,” he deadpans. “I follow what’s going on. I’ll never give up on fashion. I still see Nancy [Reagan]. She came to my birthday party last September.”

But fashion, like so much photography, has become much too racy for Galanos’ refined taste. “It’s vulgar — sex to the excess,” he says. “We see it so often, we  should stop and ask if they can do something else.

“Photographers have to have an eye and taste for what to do with it — setting up the lighting and the folds. … In my photography, I’m not doing people. I’m very shy about asking people to sit for me,” he continues, contemplating an image he took of the Lotus Gardens at Santa Barbara that looks like a photo realist painting.

Galanos’ photographs date to the 1960s — like the one of a Parisian antique shop with metal bars on the window and the one of the handsome young man with the dark, seductive eyes — but lately he has been shooting naturally lit idyllic scenes, such as his images from the Indian Canyons, and the graceful movement of inanimate structures like the Getty Museum, which he shot for its curved windows and abstract reflections.

So, while the Los Angeles County Museum of Contemporary Art’s Doris Stein Research Center holds the James Galanos Archive — a collection including a biography, sketches, photographs, journal articles, news clippings, videos, correspondence, awards, and other materials documenting his career — Galanos continues to create in another medium, capturing textures in two dimensions rather than in three.

Time is valuable, indeed — even in retirement, and especially when you’re waiting for perfect light.