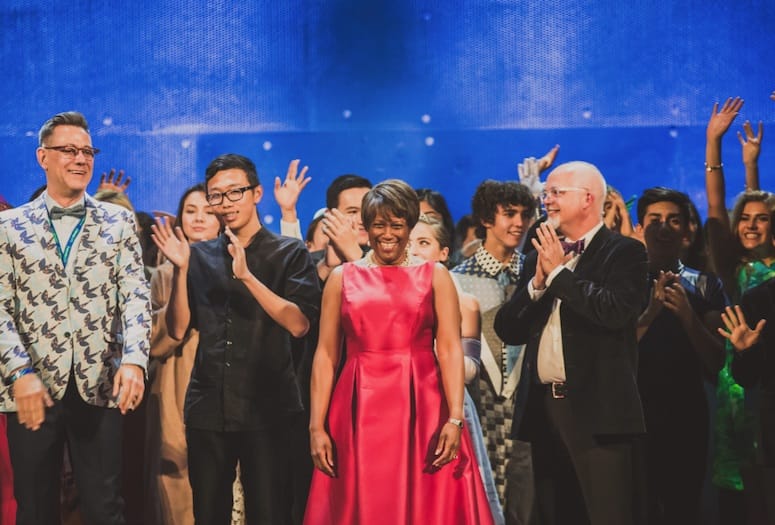 In honor of its 70th Anniversary, Idyllwild Arts Foundation invited the Southern California community to a top-notch celebration April 16 at The NOVO (formerly Club Nokia) in Los Angeles.

Idyllwild’s 300 students representing 30 countries were on hand to perform, exhibit, attend, and support the milestone, which featured a Student Exhibition, as well as a Student Showcase performed by Idyllwild’s best talent on this world-class stage. More than 900 guests in attendance included Idyllwild Board of Governors, board of trustees, emeritus trustees, parents, donors, and overall supporters.

“At this event, we raised nearly $ 500,000 toward the $6 milion in scholarships we provide annually to deserving students,” said Pamela Jordan, president of Idyllwild Arts Foundation. “I believe this event was a catalyst toward our endeavor to attract students, artists, benefactors, and others to Idyllwild. This celebration was an authentic representation of who we are and what we do. I am thrilled to share with you the talent and passion of these young artists.”

The Idyllwild Arts network stretches throughout Southern California, and some of the best minds in the entertainment industry offered to help mark this momentous occasion. Former CBS producer and Idyllwild Academy alumna parent, Suzan Mischer stepped forward to be the artistic director/producer of the anniversary celebration. Suzan enlisted the expertise of her husband Don Mischer, to produce the video “We are the Idyllwild,” which premiered at the event.

The celebration began when doors opened at 5 p.m. to showcase an extensive student exhibition from the Visual Arts Department of Idyllwild, featuring paintings, sculptures, photographs, ceramics, and printmaking.  Guests were then escorted upstairs to The NOVO Theatre to enjoy the Student Showcase of outstanding performances, highlighting Idyllwild’s talented dancers, musicians, and actors of Idyllwild Arts Academy.

The celebration continued into the night with an over-the-top Back Stage party in the VIP Lounge of The NOVO, where guests were treated to specialty cocktails, numerous food stations, a jazz trio, and students painting a 6-foot stretch of canvas.