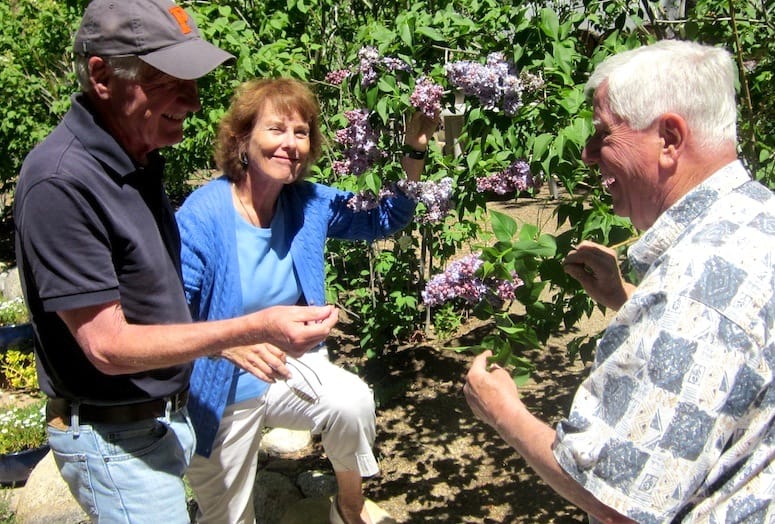 As you walk down the path, you immediately encounter a 6-foot-tall lilac bush pregnant with purple flowers.

As you smell its fragrance, you are hypnotized. Yes, there is no flower quite as beautiful and aromatic as a lilac.

“Lilacs have a special meaning to most people,” says Gary Parton, a retired schoolteacher, whose Idyllwild garden boasts 255 different lilac bushes. “When the settlers came to America, most brought lilac clippings with them.”

Parton quietly hosts his Lilac Walks, a 30-minute guided tour around his one-acre estate through the end of May. Daily tours (except Monday and Tuesday) are held from 9 a.m. to 4 p.m. for $5 each. He also sells potted lilacs.

Known as “The Lilac Guru,” Parton follows in the footsteps of two other lilac growers from Idyllwild: Ron “Tommy” Emanuel, “The Lilac King,” and Reva Ballreich, “The Lilac Lady.”

Ballreich studied under Emanuel, and took her lilac enthusiasm as far as she could, including designing the gardens at the Statue of Liberty, and hybridizing her own varieties, including those she named after Idyllwild, and Parton’s estate, Alpenglow.

Both are flourishing in his garden.

In the center, he’s creating a “Circle of Honor,” a tribute to Ballreich, who dedicated more than 40 years of her life to developing lilacs.

VIDEO: Take a tour of the "Circle of Honor" with Gary Parton on his Idyllwild property.

A concert pianist who performed in Europe, Ballreich retired because of carpal tunnel syndrome and turned her attention to lilacs. She joined the International Lilac Society, eventually serving as its president, and traveled extensively learning about lilacs.

She started hybridizing her own, some of which took up to 15 years to complete. Most are thriving in Parton’s garden.

Like Parton, Ballreich would open up her Idyllwild estate for May tours that would attract lilac lovers from all over the world.

Yet, Parton isn’t ready to turn over his mantle.

“I don’t want to turn 80, and look for the next person to take over the Lilac Walks,” he says. “I would like to see everyone in Idyllwild getting involved so it becomes a lilac destination.”

To fulfill this dream, Parton has planted lilac bushes around Idyllwild, including Jo’An’s Restaurant, the Idyllwild Inn, and the Idyllwild Help Center.

“At the Help Center alone, there are 78 lilac bushes,” he says.

With the help of many volunteers, they have reached their goal of 300 in three years.

“It would be great if Idyllwild would be like Lombard (Ill.), which has been promoting lilacs since 1869,” says Parton.

Parton has spoken about creating a town-wide lilac event with some area businesses that are enthusiastic, including the Idyllwild Nature Center and local restaurants. They have discussed everything from selling plants to developing special desserts topped with lilac blooms.

Until an event happens on that scale, Parton will continue to open his estate to tours.