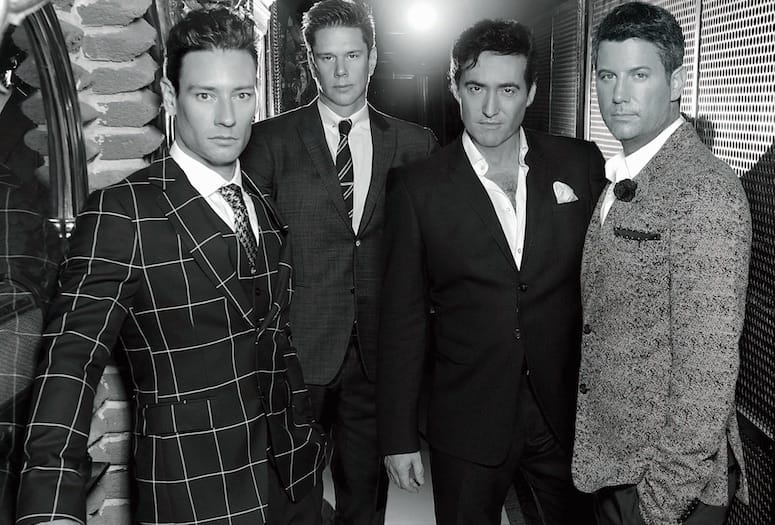 For Il Divo, opera and pop music make creative bedfellows. Since the male quartet’s vibrant 2004 debut — a testament to music titan Simon Cowell, who discovered and mentored the fellas — the singers have stayed in the limelight with more than 30 million records sold.

The group also holds the distinction of being the only crossover group to reach Billboard’s coveted No. 1 spot.

Collectively, their music strikes all the right emotional chords, uniting two musical genres to sublime ends. “Regressa a Mi (Unbreak My Heart)” and “The Time Of Our Lives,” for instance, will raise the hairs on your arms a bit.

Miller, who was born in San Diego and raised in Littleton, Colorado, spoke with Palm Springs Life prior to the group’s March 16 appearance at Fantasy Springs Resort.

It’s been a wild 15 years for you guys. Looking back, how does it feel?

The four of us remain, other than being in a different economic bracket, quite similar to whom we were 15 years ago. Part of that is that we were all adults by the time things took off and had gone through the maturation process. We had all gone through the process of becoming artists and gaining a certain level of recognition in our own careers. So here we are 15 years later and we never take it for granted. We let the music speak for itself.

Simon Cowell obviously played a part in your journey.

It was his brainchild. He had this feeling. The concept was relatively new. I think he heard Andrea Bocelli playing in the background some place and wondered, “Why don’t we have more of that? Why aren’t these people showing up at America’s Got Talent?” He initially wanted to make a TV show and audition opera singers. And then it evolved to, “What if we put four opera singers in a room and see what happens?”

And look what happened.

Simon is an impresario. He finds talent. Sometimes he doesn’t know what he is looking for. But beyond that, he really leaves it up to the artist to do what they do. When it came down to the four of us, I had met the others in the studio for the first time, but I had seen them in various stages during the audition process. It wasn’t until we got into that first recording process that we knew what we could do with the track and it could be something we could all be proud of. At first, it was like butting heads together and after the first month it started flowing.

What is it, do you think, that makes the four of you work?

When did you know that this was the path you were going to take?

I always had music book in front of me and always gave it everything I had. I didn’t know if it was going to last, but I knew that if I were ever to walk away from it, I was going to give it everything. In the opera world, you’re like an independent contractor. You do a gig and get contracts and you know when things are coming up. It’s not like on Broadway where you know when the show opens and you’re there until it closes. That’s what I was doing at the time. And then our first album came up, and, it was one thing after the next. About four years, I looked up and went, “Is this what I am doing now? What happened to me?” I decided to ride the tsunami as far as it would go.

What do you love most about performing?

It’s changed over the years. When I first started, I really enjoyed the accolades. Around the time I was in “La Bohéme,” working with Baz Luhrman on Broadway, it totally changed my approach as a singer and to the music. He said to me, “You can go all out and be loud but if you can find the silence between the notes, you’ll find people coming out of their seats. They’ll want to be connected to you.” That turned my whole take on music on its head. I want to be part of something that makes people happy.