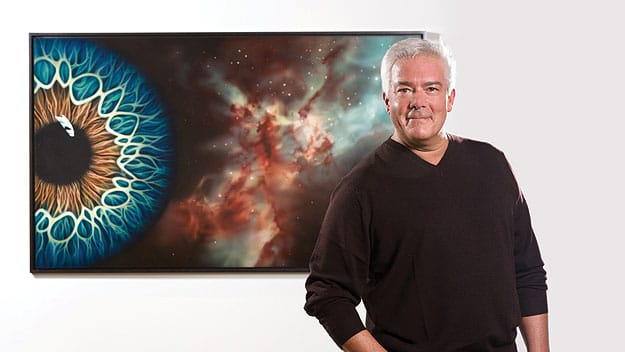 Carlo D’Alessio unveils his latest work, I, this month at Michael H. Lord Gallery in Palm Springs. “I take my work seriously,” he says. “I don’t take myself seriously.”
MARK DAVIDSON

“Security, there’s a man touching every apple on Aisle One,” he jokingly mimics a would-be grocery clerk.

D’Alessio is describing the kind of thought (some might call it torture) he goes through with his paintings. The apples were for his pivotal painting titled Eve.

“I took a month to decide how many apples to have in ‘Eve,’” he says, explaining that 11 “is completion; it’s a very high number in metaphysics.” Each apple had to be different and have “something interesting.”

D’Alessio, who grew up in the Bronx and attended the New York School of Music and Art (where, despite dyslexia, he advanced straight from seventh to ninth grade), took a surrealistic approach in the 1980s with paintings based on architecture. “Past, Present and Future” and “Three Symbols of Power” contain a visual portal (“to bring you into the painting”) and elements that harken to the past.

“Now I am using color and varnish to create depth in paint that I never had,” he says, noting that he often uses 18 to 20 layers. His large acrylic-on-board paintings fuse the precision of hyperrealism and dreaminess of surrealism.

After moving to Lake Tahoe, D’Alessio embraced his new, nonurban environment by shifting to “very elemental” subjects: skies, stars, and water. Yet he retained the intense focus that distinguishes his work. For a painting of the Fannette Island teahouse ruins, he obtained a map of the night sky from that location at a specific date and time, then painted the stars within a millimeter of accuracy.

He completed “Tea at Two” (actually 1:57 a.m.) in nine months. “Eve” took him six years, though he put it away for a year and a half because he wasn’t where he wanted to be technically. His partner, Sam Heaton, likens him to a diamond cutter who edits in his head before making a cut.

“I can go in the studio for three days and not touch my painting,” D’Alessio says. “I look at it and look at it. Then when I do touch it, it’s absolutely what I want. You can repaint,” he acknowledges, “but there’s a freshness when it flows; it’s not overworking it.”

His most classically surrealistic work — a 6-foot-wide painting commissioned by Andiamo Restaurant in Aspen, Colo., (titled “Andiamo”) — shows a “preconstructed” temple on a lake with Michaelangelo- and Parrish-inspired statues reposed above a tile floor. Squares of marble, stone blocks, and a clock float in the air.

“Everything is a second before it falls into place,” D’Alessio explains. People ask him about the significance of the time on the clock (10:50). “It would have taken me too long to decide on a time, so I just looked at my watch,” he says, smiling at the uncharacteristic serendipity.

For a series of paintings with cosmic skies — what he calls his “cloud period” — D’Alessio uses a tiny brush (you can practically count the bristles in his favorite one).

“The more I get way out, the more I get … [here, the artist pinches his fingers together] this. The farther out I get, the deeper I go in.” That’s even more evident in his latest work, “I”, a 3×5-foot painting based on Fibonacci numbers. A microscopic view of an eye, resembling an anemone, counterbalances a field of cosmic clouds.

“This is a little edgy for me,” he says. “It’s like surrealism: putting things together that never worked before.”

D’Alessio reached his “edgy” point after studying pi and the golden ratio.

“I love all the preparation,” he says. “People tell me I should be more spontaneous. No, you be spontaneous. I will be what I want to be.”