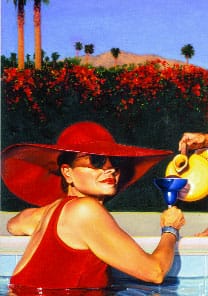 Three luxuriating women appear poolside, perfectly at ease and awaiting a glass of chilled water with lemon. One them leans on a beach chair, which has white and peach stripes that match the colors of the host’s sleek, midcentury modern home. The distinctive Santa Rosa Mountains and stately palm trees celebrate place while giving this painting, Raspberry (2005), appreciable depth beneath its warm, blue skies.

It’s a half-real, half-fantasized picture — one unabashedly contrived by realist painter D.J. Hall. This is her happy place. The 54-year-old artist, who lives and works in Venice, has treasured every moment she has spent in the desert since she was a child — when she and her mother essentially switched roles and responsibilities and when her paternal grandparents offered their Palm Desert vacation home as a precious retreat.

The desert remains a place of respite when Hall wants it most — which gives deep, personal context to her paintings of beautiful women enjoying the good life. “It’s bright and it makes me happy,” she says. “There’s enough bad stuff in the world, and I’m biochemically depressed. I want to be positive.”

If life isn’t perfect, her paintings are — at least to the extent that she can manipulate them.

Although she uses photography and is a realist, Hall is not a photorealist. Rather, she hires, dresses, and positions models for photo shoots and then uses elements from her photographs to compose idealistic paintings. “My approach is an outgrowth of what I did as a kid — drawing people,” Hall says. “It’s very detail-oriented. I created my own reality, fantasizing about family and things.”

Hall keeps notebooks of ideas, and she immediately assigns each a working title. When ready to execute an idea, she makes thumbnail sketches and storyboards, collects props, and chooses models. “I’ll go to their house and look at their wardrobes,” she says. “I’ll know what I want for costume changes.”

When it comes to content, Hall — who teaches figurative drawing at Otis College of Art and Design in Los Angeles — is an uncompromising perfectionist.

To some viewers, the sharp light that Hall shines on her subjects exposes a colorful social commentary on wealth and decadence. To others, it illuminates life’s simplest pleasures, which Hall learned to appreciate 10 years ago while going through excruciating pain and physical therapy to overcome Lyme disease.

In developing each composition, she photocopies the sketches and moves elements — recasting an arm or a face from one image to another, or shifting the position of a pool ladder or a window — and then considers the landscape.

“I like drawing from outdoor scenes,” says Hall, who will try this season to paint desert landscapes en plein air, or outdoors. “The desert takes me back to happy memories. I look forward to the perpetual changes of light and the desert plants. I never cared [about the plants] until I started going to The Living Desert. They are very sculptural, elegant statements.”

Once she has determined her landscape, Hall produces the photo shoot — days and nights planned minute by minute, based on the times the sun takes specific positions, all organized for reference in her notebook. The result is typically a sweet nod to the 1950s and Hall’s love affair with the pool at her grandmother’s house, where she had so many birthday parties. “I feel personally, psychologically secure here,” she says. “It has to do with this ring of hills around me.”

If any insecurity remains, it’s a lingering, subconscious fear of aging — an issue she has gracefully explored for years through her paintings.

Mostly, Hall stays busy keeping up with demand for her work — especially since the buzz created in 2004 by movie director James L. Brooks, who, in a New York Times interview, called his Hall painting his “companion” while writing the screenplay for Spanglish. It “perfectly caught a certain upscale woman in Los Angeles,” said Brooks, who hired Hall as a set consultant.

“It’s nice to take in your setting through the process of painting or drawing,” Hall beams. “Having that memory is a good feeling.”