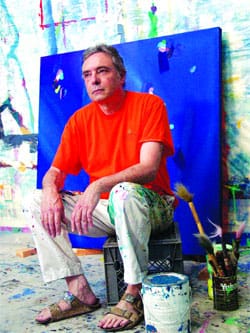 Hundreds of sheets of handmade paper lay spread out or stacked on worktables, flanked by a few dozen canvases hanging on or leaning against the walls of David Einstein’s studio in Palm Springs. A cursory glance across this workspace reveals the duality of the artist: On paper, he’s a mark maker, communicating through gesture and dramatic use of black. On canvas, he’s a pure colorist, with and without those curious marks.

On both surfaces, Einstein resolves issues of space and classic figure-ground relationships. The intuitive, abstract marks appear three-dimensional, drawing viewers into the paintings more as participants than observers.

Einstein — who also teaches color theory and drawing at College of the Desert — has explored this territory for the better part of 30 years and continually pushes the boundaries of earlier work.

He recently completed a series of works on paper that traces to his studies in the late-1960s, particularly a brush with sumi-e painting at a Zen monastery in Kyoto, Japan, where calligraphy influenced his earliest marks. “I went to understand the spiritual way of dealing with nature, universe, and family,” Einstein says. “It was exciting to go to Japan as a Westerner, because [the traditions] went back hundreds of years. And I have always had an affinity for paper. I love the surface, the texture. Making the paper is a meditative experience.”

A Zen spirit permeates his new series of paintings, Aleph, the first letter of the Hebrew alphabet. “Paper has been around for thousands of years, since the beginning,” he says. “Aleph represents the beginning; from darkness comes the light. The marks are the evolution. They’re done directly, spontaneously, and intuitively.”
The marks transcend their traditional use, often gaining a figurative quality that creates a dynamic interplay when viewing the paintings as pairs or in groups of three.

The intimacy of the paper surface and sensuality of the finished pictures call for a philosophical interpretation — one concerned with peace, respect, and patience.

Einstein’s gesture is free and easy, his composition balanced and ever mindful of space, light, and shadows cast in watercolor along the edges of certain marks. He also gleans from Japanese brush painting a deep connection to nature. When adding color to the Aleph paintings, for example, he refers to the landscape — blue, yellow, green, and brown.

He parlays the same sensibilities onto canvas, the most recent inspired by the sea — swaths of blue in fluctuating values that mimic the movement of water. They hark to Einstein’s translucent Color Veil paintings of the 1970s, considering the landscape (now the seascape) as layers of color with an inner luminosity that gives the canvases a mystical quality.

The marks on these canvases “pierce the veil and take [viewers] to a higher level,” Einstein says. “They’re all about movement of color and the illusion of space.”

The translucency of the veils has stood the test of time. In fact, the book Fixing the World: Jewish American Painters in the Twentieth Century (University Press of New England, 2003) placed Einstein’s 1975 Light Echo (60×48 inches, acrylic on canvas) in the company of paintings by Mark Rothko, Helen Frankenthaler, Susan Rothenberg, and Philip Guston — a testament to his conviction that artists must be true to themselves rather than adapt to market trends. “I still have some brushes that I was using 20 years ago,” he says. “They’re like a security blanket.”

He seldom needs one, however. Einstein began standing his ground at Skowhegan School of Painting and Sculpture in Maine, where, “tired of figures,” he heeded the advice of friend and mentor Brice Marden. Marden suggested dealing with the space around the figure and imparted the uncompromising philosophy of sticking to your guns. “He said [Jasper] Johns and [Robert] Rauschenberg stay true to themselves,” Einstein recalls. “Little did I know then Brice was Rauschenberg’s assistant. Since then, I’ve stayed true to my process.”At press time, David Einstein was preparing for a solo exhibitionin Rome, Italy.