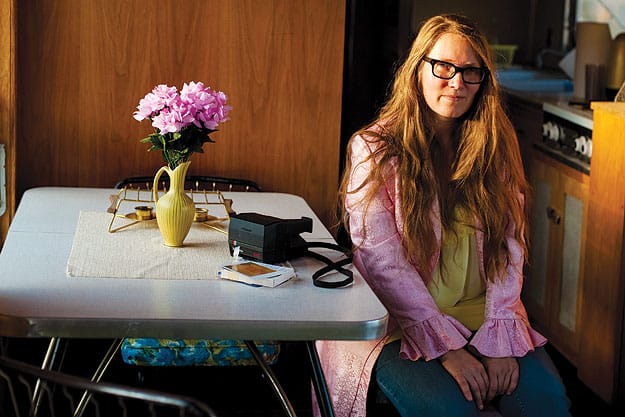 Travel up a dirt road strewn with rocks in Morongo Valley and you’ll come upon a large, pristine 1950s trailer ringed by a white picket fence, with cottontail rabbits hopping among rose bushes that somehow bloom in the extreme desert heat. Inside the trailer, period accents prevail — vintage radio and fridge; crocheted doilies; and dusty, gilt-framed photographs.

Inspired by the landscape, German artist and experimental filmmaker Stefanie Schneider made this Americana fantasy her surreal home sweet home in 2005.

“There’s a completely different light here than in Germany, a beautiful light,” says Schneider, whose 10-acre property in Morongo Valley is dotted with vintage trailers. They surround her midcentury house and serve as sets for her photo shoots or as guest lodgings for her friends from Hollywood and Berlin. “But what I really love about the desert is the desolation,” she continues, “the sense of hope for something that might or might not come. It’s easy to see our dreams projected in the desert.”

Known for shooting trailer-park chic, fine-art photographs exclusively on Polaroid film, Schneider recently completed her most ambitious project to date: a feature film made entirely of Polaroid stills (4,000 images), the story set around her 1950s trailer. The film, called The Girl Behind the White Picket Fence, tells the story of a brokenhearted girl who lives in the trailer. She is played by model Heather Megan Christie, girlfriend of actor Joaquin Phoenix and former partner of Red Hot Chili Peppers singer Anthony Kiedis, with whom she has a son. She stars opposite Kyle Larson, a real-life gypsy fisherman who catches crabs in Alaska when he’s not surfing in Southern California. Neither of the two has acted before, and never in the history of moviemaking has a director shot a film entirely on Polaroid film.

“There was great difficulty shooting a film this way,” says Schneider, who — with her long, straight hair; wide, innocent eyes; and thick-framed glasses — conjures up the image of an art-house Gretel. “If I had used a regular camera, I would have had 36 exposures per minute, much faster and easier than using the old Polaroid camera, which takes a long time to shoot one frame. Also, sometimes it doesn’t shoot at the exact moment you think it’s going to. But that’s really great, because then you miss the perfect moment … and often those are the best shots.”

The photographs in The Girl Behind the White Picket Fence stand alone, but together and in sequence — filmed with super 8 film stock and overlaid with poetic voiceover monologue — they create a dynamic kaleidoscope of words and pictures, a dreamy tale that channels Terrence Malick, Gus Van Sant, and pages torn from a lonely girl’s journal.

The idea to shoot a movie this way came about in 2004, when Schneider was working with leading Swiss director Mark Forster (Monster’s Ball, Finding Neverland, Quantum of Solace) on his film Stay. She had met Forster at director Wim Wender’s birthday party in Hollywood. A few years later, Forster asked Schneider to shoot Polaroids of scenes from Stay as he filmed. When he used those photographs for dream and memory sequences in the movie, Schneider for the first time saw her Polaroids strung together in sequence, moving with rhythm, like a flipbook, in the context of a story. When Forster urged her to consider making a feature film using that technique, the seed of a larger film project, 29 palms, ca, was sown. She mentioned the idea to her good friend, German actor Udo Kier, who also gave the idea a big thumbs up and agreed to play the part of a mysterious shaman in the film.

Thanks to Schneider’s strong reputation in the art world and her Hollywood connections, getting talented people on board was the easy part. The hard part was finding the perfect trailer — and bringing it to the desert.

“This trailer almost killed us,” says Lance Waterman, who lives with Schneider in Morongo Valley. After finding it on eBay, the couple drove to Utah to pick it up and tow it to the High Desert.

“We were driving down a hill with this enormous trailer behind us when we realized that if we wanted to stop, there would be no way to do so without the trailer crushing us,” Waterman says.

“Lance was even giving me instructions on how to jump out of the truck if we needed to,” Schneider adds. As soon as the road leveled and they could pull over, they called a towing company, which transported the trailer to Morongo Valley.

Filming took place in spring 2011 and 2012, and the German television channel Arte will air the film in 2013. The Girl Behind the White Picket Fence will screen this month at the Light Assembly Miami Beach festival.

While Schneider may come from a long tradition of photographers-turned-filmmakers [Stanley Kubrick started out as a photographer, as did Ken Russell (Tommy, Women in Love) and Larry Clark, who was was a controversial fine-art photographer before directing Kids], she does not see her future in Hollywood, directing blockbusters.

“I don’t think I want to make more films,” she says. “The actors were saying they would love to work with me again and were asking if I would like to make other movies. But being on movie sets is far too stressful. At least with this, I was in complete power of what was going on creatively. That said, if this gets a lot of acclaim, we can always think again. One should never say never.”