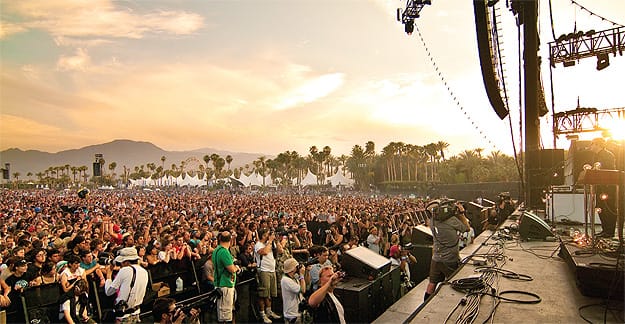 Indio has arrived. It’s a vibrant, amenity-rich city for residents, businesses and visitors alike. From the city’s bustling teen center to large residential developers like Pulte Homes and KB Homes to new businesses locating in Indio. The city invested more than $100 million over the last five years in infrastructure, from miles of newly paved roadways to new and upgraded water and sewage treatment plants. “Indio remains a city on the move with positive present and future growth,” notes Mayor Gene Gilbert. “There are examples of all types showcasing this around the city.”

The valley’s oldest city is also the fastest-growing and the largest city, with more than 84,000 residents and has the valley’s second-lowest crime rate. It’s no surprise Indio’s great diversity of people, places, and activities continues to attract new residents, commercial and residential development, and businesses.

“Residential development is active here, north of I-10. We are seeing Pulte and KB Homes pulling permits for new homes,” notes Mariano Aguirre, Indio’s development manager. “That tells you that Indio is where builders still want to build and buyers want to buy.”

The two super shopping destination centers at Jackson Street and I-10 draw crowds throughout the valley. The Showcase Center with a Super Target, Marshalls, Ross, and Big Lots has increased sales tax revenues for the city, as has the Regency Center located across the way with anchor tenants Winco supermarket and Home Depot. These centers created hundreds of jobs for residents.

“For all the noticeable development around the city, you have to consider the tremendous amount of work and dollars that have gone into roads, water systems, and storm drains to support higher-density development. These are all city assets that you don’t see but make a tremendous difference in the quality of life Indio offers,” Aguirre observes. For example, the city heavily invested in infrastructure in new landscaping and sidewalks on Miles Avenue, with much of it spent underground constructing a new storm drain system.

The city’s planned transportation center is moving forward at Jackson Street and Indio Boulevard. The proposed 10,000-square-foot facility will house both Amtrak and Greyhound stations, as well as a restaurant to serve travelers. As part of the Coachella Valley Enterprise Zone, businesses locating in Indio are offered attractive state tax credits. Indio is also part of the Coachella Valley Empowerment Zone with federal tax credits for new businesses. The city’s Redevelopment Project Area can provide further assistance to new businesses. The message: Indio is open for business.

Occupying the former Greyhound site will be the multistory College of the Desert East Valley Campus. When renovation is completed in 2012, the 40,000-square-foot building will accommodate more than 3,000 students. The city also is negotiating with a private developer and investors to bring a first-rate law school to the city. That’s one more amenity to set Indio apart.

The Indio Senior Center, opened less than a year ago, buzzes with activity starting at 7:30 a.m. It provides a much-needed community resource people 50 and over to socialize, make new friends, share their skills and ideas, learn new things, and gather information. It offers Indio’s culturally diverse population a variety of classes and discussions and also serves lunch.

At the other end of demographic spectrum is the Indio Teen Center (ITC), which is gearing up for a full year of activities and programs. One-third of Indio’s population is younger than 18. For them, the state-of-the-art center (a block from the Indio Senior Center and across from Indio High School) provides a safe, supervised, and secure place to meet with friends and make new ones.

The ITC serves more than 200 teens daily. It provides high school students an array of educational and recreational activities, including college tours, job search, and career planning. Teens also take advantage of cooking, dance, and boxing classes. The boxing program is taught by professional boxing champ Gabino Saenz. The ITC works closely with the Indio Senior Center integrating multi-generational programs that teens and seniors attend together. It is the only facility of its kind in the Coachella Valley.

As the city has worked diligently to provide more amenities in every way for a diverse population it has one common goal. “Everyone here in the city is working towards having roads we can drive on, parks we can play in, shops we can shop in, and a safe community to raise our kids and grandkids in,” says City Manager Dan Martinez.

The heavy investment in infrastructure promises that when residential and commercial development strongly gears up again, Indio stands ready to meet demands. Consider the acres and acres of prime available land ready for future development along Interstate 10. The I-10 Auto Mall now houses five major dealerships, generating strong sales tax revenues for the city. Once the economy turns, look to it for further expansion.

Infrastructure investment continued this year with the opening of the new Indio corporate yard, a first-class infrastructure and public works facility. It is the backbone of the city for essential services, including emergency response. “We didn’t just stop dead in the water with large public works projects. It turned out to be a very advantageous time for us to build the corporate yard when we did. Moving forward with it during a tough economy actually saved us around $2 million,” Gilbert says.

Entering Indio from the west on Highway 111, you’ll notice a major difference in the scenery. A desert-scaped median with a natural stone sculpture welcomes you. On the north side sits one of the valley’s largest and grandest restaurants: Jackalope Ranch, a destination for diners from across the valley. The lodge-like restaurant sits on 6.5 acres and offers Southwestern and barbecue fare. It features an indoor saloon, outdoor palapa bar, evening entertainment, and Sunday brunch. Next to Jackalope Ranch are 50 prime acres known as Polo Square, a site ripe for commercial and residential development.

Dan Martinez grew up in Indio and recently returned after 24 years, accepting the city manager position. “In the last five years, there was substantial investment in infrastructure improvement and new facilities, positioning the city as a location ripe for both business and people to relocate to,” Marintez says. He points to more than 80 miles of newly paved roads, 112 miles of new water lines, and the renovation of six city parks. “Indio is a city I very much wanted to come home to,” Martinez says. An additional large public works project in the design stage is the off-ramp at Jefferson Street and I-10. The Sun City Shadow Hills Fire Station and Terra Lago Fire Station have opened.

In downtown, the continued reconstruction and maintenance of roads and capital improvement projects are contributing factors to Indio’s economic success. In addition to the new COD campus site at Oasis Street and Civic Center Drive, a vacant commercial building with abutting warehouse is slated to become an artist studio.

To cope with issues associated with home foreclosures, Indio has implemented a variety of successful programs, helping residents hold onto their homes and the maintain integrity of their neighborhoods. Some have received national recognition. They include The Housing Resource Center, Neighborhood Stabilization Programs, a Foreclosure Registration and Maintenance Ordinance, Housing Rehabilitation Program, Neighborhood Cleanup Program, and Better Neighborhoods Program. The city created the Coachella Valley’s first and only cityfunded Housing Resource Center. As a result, Indio was the only West Coast city to be recognized by the United States Department of Justice.

Indio also offers recreational and entertainment amenities second to none. These include Fantasy Springs Resort Casino, which hosts internationally known entertainment headliners, state-of-the-art bowling, and first-class restaurants. Other attractions include golf clubs and resorts, the Coachella Valley Museum and Cultural Center, murals, polo, and other equestrian events, the Wild Bird Center, and the stunning Empire Polo Club as the perfect venue for sporting and entertainment venues.

With a multitude of amenities and services to serve residents, visitors, and businesses in a first-class environment, it’s evident that Indio has arrived.