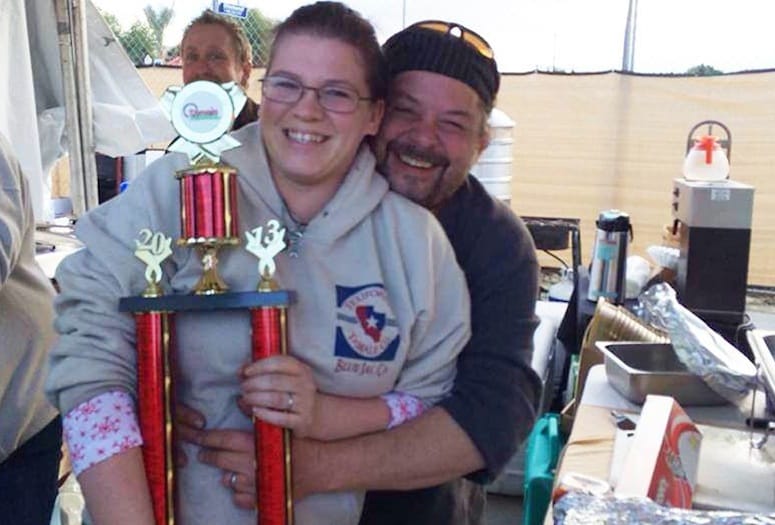 “I do eat chicken and pork tamales, and I’ll buy them frozen and bring them home. I actually use it as an excuse to practice every year; I love tamales,” says Bill, pictured below. Pork and chicken tamales are among Bill's favorites, especially during the Mexican Christmas celebration. He prefers mild tamales for contests, since they go down easier than spicy ones.

Expect to see Bill defend his crown as tamale-eating champ at the 23rd annual edition, Dec. 6-7, in Oldtown Indio. The free-admission festival attracts more than 100,000 people and features five stages of entertainment, an opening parade, car show, art and wine garden, Kiddieland and more than 200 vendors.

Bill began his road to tamale eating stardom in Indio with a win in 2008, followed by three straight victories starting again in 2011 by downing 16 tamales in 10 minutes. Last year he ate eight tamales in 2 minutes.

“I’ve had to learn and practice a lot over the years,” Bill explains. “I eat large quantities so that I know my stomach will expand to the right size, but I’ll typically starve myself anywhere from 8 to 18 hours before a contest to make sure my stomach is empty so that my stomach will stretch to accommodate all that food at once.”

Tamale recipes are often passed down from one generation to the next, but Jeff and Micki Smith of Texifornia Tamale Co. have concocted their own from Texas tradition.

“My husband and I grew up in Texas, and we grew up on Texas style tamales which are more filling and less masa, so we have our own little style,” Micki says. The Smiths’ make at least 1,500 tamales weekly for their Blue Jay, Calif., restaurant and sell about 100 daily.

“The spicy brisket tamale is by far our best seller,” Micki shares. “We smoke the brisket for 12 hours and make an ancho chile tomato sauce and mix it together, so you get Texas BBQ and Mexican flavors in one tamale.”

Texifornia Tamale Co. will shut its doors in Blue Jay and move to its new San Diego location starting in January 2015.